A family of four Birmingham men, dubbed ‘professional forgers’, were found guilty and sentenced to jail for an elaborate counterfeit operation that produced and distributed millions of £10 notes.

“It is difficult to imagine how better counterfeit notes could be produced.”

Two brothers Amrit Karra, 45, and Prem Karra, 43, both from Walsall have been sentenced at Birmingham Crown Court for 7 years, for forging more than £1.2 million worth of fake bank notes.

The two brothers ran a printing business in Hockley, Birmingham. Behind closed doors however, they ran a highly sophisticated operation; by using specialist paper, ink and foil, they managed to print almost £1.27 million worth of counterfeit £10 notes.

The Judge at the Birmingham Crown Court called the brothers ‘masterminds’ and ‘architects’ of an extremely well thought out and intricate counterfeit scam. 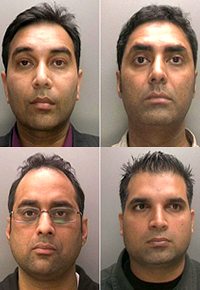 Along with the two brothers, their brother-in-laws Rajiv Kumar, 40, of West Bromwich; and Yash Mahey, 44, of Handsworth, were both jailed for their involvement, and found guilty of the same charge. They were sentenced to four and a half years in prison.

The sentence came after a five week trial which ended in December 2013.

Judge Richard Bond said the men were part of a gang of ‘professional forgers’ and their offences undermined the integrity of the UK currency and economy:

The Judge added: “It is difficult to imagine how better counterfeit notes could be produced.” He accused the men of committing the crime simply out of ‘greed’ and trying to make a ‘large sum of money’.

The judge continued to tell the men that by committing a crime of this severity: “[They] must expect long sentences of imprisonment…It is so serious that only lengthy custodial sentences can be justified.” 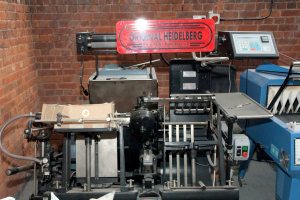 The defendant, Amrit Karra’s lawyer, Franco Tizzano stated that the counterfeit operation was a ‘one off’ and Amrit was persuaded by the other defendants to get involved.

It is believed that all defendants ‘profited significantly’ from the operation and the Judge claimed that all four men had hidden away money.

All four men, who are married with children, were told by the judge that they knew what would happen if they were caught: “You knew that if you were caught it would affect your wives and your children and other members of your immediate family.

“Knowing, as you did, the consequences of being caught, you ignored your families. The risks taken in this case were high and you must personally take the blame.”

The investigation proved to be successful after NCA officers and industry experts proved the closing of the company, Karra Design & Print, during the Christmas period in 2010 was when the men spent night after night printing forged notes. 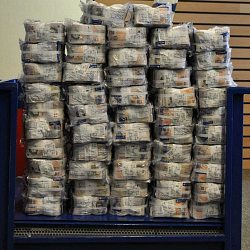 Of the prosecution, Timothy Hannam, admitted that the printing business had been both legitimate and legal for many years:

“But it was in financial difficulties and in 2010 they decided to use its facilities to produce high quality counterfeit £10 notes on an industrial scale,” he explained.

A forensic analysis showed that the print equipment used by the company was being used to produce and distribute fake bank notes. The success of the investigation also came down to the evidence used from mobile phone data and number plate recognition.

Speaking about the case Richard Warner, NCA Regional Head of Investigations stated: “Counterfeiting is not a victimless crime. It takes money out of the pockets of individuals and businesses.”

A spokesperson for the Bank of England stated that they work close with the NCA to cut down and fight against counterfeiting, and any individuals involved in counterfeiting will be found and punished for their crimes.

It is believed that the counterfeit and bogus currency created by the Karra brothers and their in-laws are still in circulation across the UK and yet to be recovered.

Wanderlust at heart, Fatimah is passionate about everything creative. She enjoys reading, writing and a good cup of tea. Her life motto is: “A day without laughter is a day wasted,” by Charlie Chaplin.
Ethnic stereotyping of Asian models
Racist Bullying in Schools on the Rise