Bursting with unrivalled beauty, there are hundreds of Asian models looking to break into the industry, but why is there still a huge lack of Asian models in high end fashion? DESIblitz investigates.

"If there aren't many South Asian girls modelling, that's because the agencies haven't looked."

Only recently has the global fashion industry risen and begun to consider Asian models in high fashion runway shows, commercials and magazine spreads.

With big brands such as Guess taking on Bollywood star Priyanka Chopra, it would seem the stigma of Asians in high fashion is slowly an image that is being demolished. But the famous faces of Bollywood stars still do not pave the way for the majority of struggling Asian models.

Not so long ago Asian women’s aspirations to look ‘Western’ oversimplified their step into the fashion world. Yet today it is apparent that non-Asian models are prioritised and admired above Asians in leading Asian and non-Asian fashion shows. 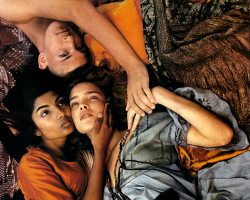 The fashion industry is regularly seen casting and booking more Caucasian models then Asian models or models of any other race, and regardless of the intentions, the facts scream out discrimination.

Preference of non-Asian models on the basis of their skin colour is undoubtedly beyond artistic.

The Closet Feminist recently highlighted the anti-racist campaign at the beginning of New York Fashion Week, where ‘an activist in the fashion world and former model agency owner, sent a series of letters to governing fashion bodies calling out specific designers on their racism’.

Model Bethann Hardison decided to take action against all the designers who were particularly ‘guilty’ of using few to no models of colour:

“Not accepting another based on the colour of their skin is clearly beyond ‘aesthetic’ when it is consistent with the designer’s brand. It can no longer be accepted, nor confused by the use of the Asian model,” she wrote.

Bethann Hardison also mentioned that brands such as Chanel and Hermès only used fewer Asian models paralleled with Caucasian models, purely as an example of ‘tokenism’. It’s just not an unintentional coincidence that non-Asian models are cast and booked in larger numbers against Asian models.

Anikita Sharma, a runway fashion model says: “I’ve become obsessed with Asian existences and absences in fashion shows.” She explains that designers who prefer non-Asian models on the basis of their colour is purely prejudicial. 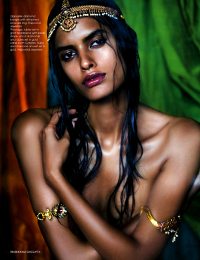 In response, many designers argue that their selection of runway models is grounded on the suitability of the work.

Asian fashion show designers further claim that because Europe is predominantly Caucasian and greater in population compared to Asians, there is a greater option of non-Asian Caucasian models.

Therefore it could be misled that the designers principally use non-Asian models for their runways.

Lakshmi Menon is set to be South Asia’s first supermodel, and is one of the very few Indian models to land themselves big shows and editorial covers for brands such as Hermès and Jean Paul Gautier.

In an interview with The Independent, Lakshmi mentions that when she first began modelling she received very little work:

“When I first signed with agencies in Europe and the US I barely did anything; it was one show here, another there. At that time it was completely dominated by Caucasian girls, particularly Russians.

“There were a few black girls, of course, such as Liya Kebede – and someone like Naomi Campbell would do the odd show-stopper – but there weren’t many girls of colour at all.”

Lakshmi thinks that the launch of Indian Vogue in 2007 has really helped boost the market for Asians models, but she believes that the lack of Asians in modelling is due to the modelling agencies themselves, she says: 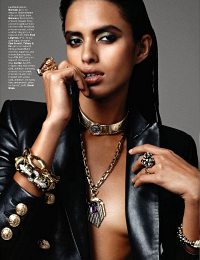 “If there aren’t many South Asian girls modelling, that’s because the agencies haven’t looked, I don’t think anyone has really come to India to scout for girls, or at least not in the same way they go to South America or Eastern Europe.

“In a country of more than 1.2 billion, there are bound to be beautiful women – I mean, come on, who are we kidding?”

“Girls from Pakistan, Sri Lanka, Bangladesh and India tend to come from religious backgrounds where traditions and sometimes old-fashioned ideals are upheld, this is changing, slowly, as fashion and modelling gain a higher prominence in countries such as India, where the fashion industry is becoming more respected.”

However, concern still arises for Asian models of being overlooked and cast aside by their non-Asian counterparts. There seems to particularly be a fondness amongst Asian designers to cast mostly Caucasian models on the basis of their skin colour, slim and tall figures paralleled with the darker and shorter figures of most Asian models.

Undoubtedly Asian models have nothing lacking in respects to beauty compared with non-Asian models, therefore opportunities should be higher for Asian models in the high fashion industry.

The exotic and diverse expressions of Asian models should make them exceptional and not a reason for them to be apart from the high fashion industry; an industry that claims to be creative, diverse and revolutionary, and as Amy Odell puts it in The Cut:

“It’s ironic — aren’t great innovators in the fashion industry supposed to take risks and be different and not do what everyone else is doing?”

There is definitely not a lack of Asian models, there are so many small time models trying hard to make it big, so the question remains as to whether it is the colour of their skin that restrains Asian models from high fashion bookings?

When once the discussion of discrimination surrounded black models, it is now one that has become about South Asian models.

Whether it’s the choice of the designer, stylist, coordinators or model agencies, the decision to cast aside Asian models is not a fair representation of today’s encouragingly multicultural society.

In truth, it is unacceptable, and as Asian models rise and battle their way to the top, it is without a doubt that they will have to fight against ethnic stereotyping to get there.

Suman Hanif is an emerging filmmaker. With a passion to entertain and write Suman's work explores health, social and environmental concerns with the intention to empower people. "Journalism is an exciting opportunity that enables me to communicate to the world."
Asian Doctors face Racism within NHS
Karra Brothers Jailed for Counterfeit Notes