The History of the Kebab

Kebab’s have rapidly become a famous and tasty delicacy across the world, especially the UK. Popularly seen as the perfect finish to a fun night out, DESIblitz trace back the history of the Kebab.

True shish kebabs are made with pieces of marinated lamb that is attached to a bladed metal skewer.

The history of the kebab traces back to myriads of both Asian and African cuisines. The word kebab means ‘to roast’. The term can also be referred to as a meat patty mixed with spices.

In Asian countries, kebabs are served mostly with rice and salad, however it is now served in different forms with bread as well.

With the passage of time, kebabs have managed to find a very significant place in modern day cuisines.

Kebabs are considered to have originated in Turkey when soldiers used to grill chunks of freshly hunted animals skewed on swords on open field fires. 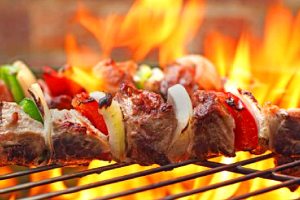 The name was firstly discovered in a Turkish script of Kyssa-i Yusuf in 1377, which is the oldest known source where kebab is stated as a food item.

There are numerous varieties of kebab, some of the most famous ones include shish kebab.

Koyun kebabi is a whole lamb roasted in a covered pit. Kabarma kebabi is very common, and kefenli kebabi is a unique kind of roast meat wrapped in a bread.

In Arabia, shish kebab or lahm mishwy (grilled meat) is essentially a part of traditional food. True shish kebabs are made with pieces of marinated lamb that is attached to a bladed metal skewer that is four sided and flat to grill. 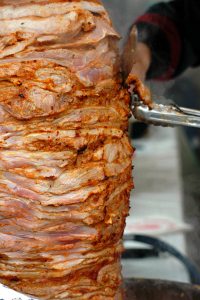 In order to make the presentation look scrumptious, it is served with different types of salads.

Shish Kebab is most commonly referred to as ‘doner kebab’ in the UK. The word doner kebab means ‘rotating kebab’. It is roasted or grilled on a vertical rotating spit.

The famous doner is considered to have been invented 40 years back by Mr Aygun. It is a traditional sliced meat that is skewered.

Lamb meat is the true form of doner but the type of meat of doner differs from region to region depending on tastes.

Other types of meat can include chicken, lamb, goat, beef and fish.

Another famous type in Turkey is ‘steam kebab’ which is steamed in an earthenware casserole. The lid is sealed so that the meat is cooked within its own juices. The most common ingredients used are thyme, pearl onions, garlic and a variety of spices.

Pakistan is one of those Asian countries where people crave for spice rich cuisine. Traditional food in Pakistan naturally possesses a wide range of spicy kebabs. Pakistani cuisine is rich with various kinds of scrumptious varieties.

The kebab has a vital place in true traditional Pakistani cuisine. Some of the most famous kebabs include Seekh, Shami, Reshmi, Chapli, Bihari, Tikka, Chicken, Fish, Dhags, Doner, Pasanday, Peshawari, Qeema, and many more.

Chapli kebab is a kind of meat patty. The meat can be of beef or chicken together with loads of ingredients like salt, onions, tomatoes, green chillies, coriander seeds, cumin seeds, black pepper, lemon juice, eggs, cornstarch and coriander leaves.

Chapli is very popular among Pakistani Pashtuns. Furthermore, it is a popular food item both in Pakistan and Afghanistan. These days there is a growing trend of cooking shows in Pakistan in which famous chefs make dishes live and provide people the opportunity to cook in a professional way.

The people of both Pakistan and India are simply fond of different varieties of kebabs. In India, some of the most popular include Bihari, Boti, Dora, Kakori, Tangri, Kastoori, and Hariyali.

Bangladesh is also famous for its Mughlai dishes just like Pakistan and India. The must try varieties in Bangladesh, especially Dhaka, include Shutli and Tikka. Doner is also gaining immense popularity along with Shawarma in Bangladesh as a form of fast food. 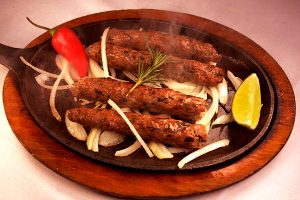 When it comes to Asian cuisine, freshly cooked and grilled kebabs commonly top the favourite list. With so many different styles, types, varieties and shapes, kebabs are the most versatile dish that Asians and non-Asians can enjoy together.

Sidra a student of Economics, is an experienced writer who adores reading too. Having the drive to take on challenging goals, her motto is "We write to taste life twice, in the moment and in retrospect."
Famous Indian Celebrity Restaurants
Top Teas of the World