DESIblitz spoke exclusively to emerging talent, Gracie T, about her rise as a DJ, playing at the SFTOC Festival and representation.

"There’s loads of brown history in the music scene"

Gracie T is a rising DJ within music who has been making waves through her iconic sets.

The Sheffield-based star is certainly one of the trendsetters who is resurging the iconic sounds of the British underground.

From electronica to funky house and mixing in Bollywood blends, Gracie T has it all.

The DJ has been heavily involved in music since an early age. But, it was a party at university that kickstarted her meteoric rise.

Only able to control a few buttons, she quickly gained an incredible catalogue of skills that contributed to her musicality.

This is seen in her energetic sets on giant platforms like Keep Hush and Boiler Room.

The latter will resonate with artists, musicians and fans. Gracie T performed an outstanding back to back set with fellow DJ from the Daytimers stable, Chandé.

The Daytimers are a London-based South Asian collective that officially launched in 2020.

The platform aspires to showcase the stylings of South Asian artists and empower future generations to redefine the UK’s creative scenes.

Their name will be familiar to a lot of British Asians. It stems from the Bhangra, garage and jungle daytime parties of the 80s and 90s.

The vibe of the collective certainly shines through Gracie T. Her vibrant mixes fuse all the musical qualities of her British and South Asian cultures.

The DJ will bring this dynamic artistry to the forefront at the Sounds From The Other City Festival (SFTOC).

The electrifying festival will take place in Salford, Manchester, on May 1, 2022. It is a spectacle that is an enthralling celebration of music, arts and performance.

The Daytimers and Gracie will be in the company of other tremendous artists such as Grove, July 7 and Nayana IZ.

There’s no doubt that fans are eagerly awaiting to see Gracie T spin the decks in her famous lehenga at the festival.

But, the musician’s focus on representation does not stop there. She avidly runs another collective called The Beatriarchy with fellow DJ, Kitsta.

Here, they shine a light on the plethora of underrepresented artists with the hopes of magnifying their crafts to the world.

So, DESIblitz exclusively caught up with the rising musician to discuss her introduction to DJ’ing, the SFTOC Festival and breaking barriers.

Can you tell us a bit about yourself? 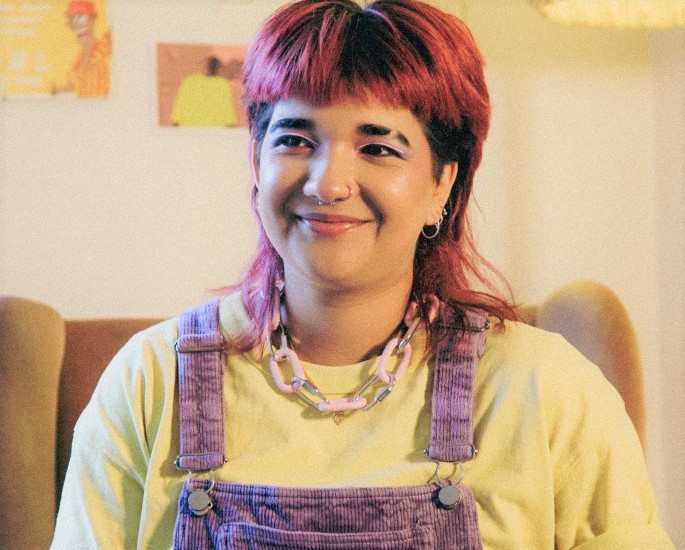 My name is Gracie, I grew up in the North East of England.

I have a multi-heritage background, my parents grew up in Hull and Malaysia – I’m half Sri Lankan Tamil and half white.

I currently work as a secondary school teacher in Sheffield.

I’m part of the Daytimers crew and run my own collective called The Beatriarchy, which aims to highlight underrepresented creatives in the industry.

And I’ve just finished my February 2022 takeover residency on the BBC Asian Network.

What inspired you to pursue music?

I’ve been a music fan for as long as I can remember.

My dad listened to a lot of garage, rap and R&B as well as rock, which definitely influenced my music taste!

I started playing the drum kit at 8 years old and stuck at that through my grades, playing in various bands through my teen years.

My favourite artists growing up were Ms Lauryn Hill, Missy Elliot and M.I.A to name a few.

What was it about mixing that excited you? 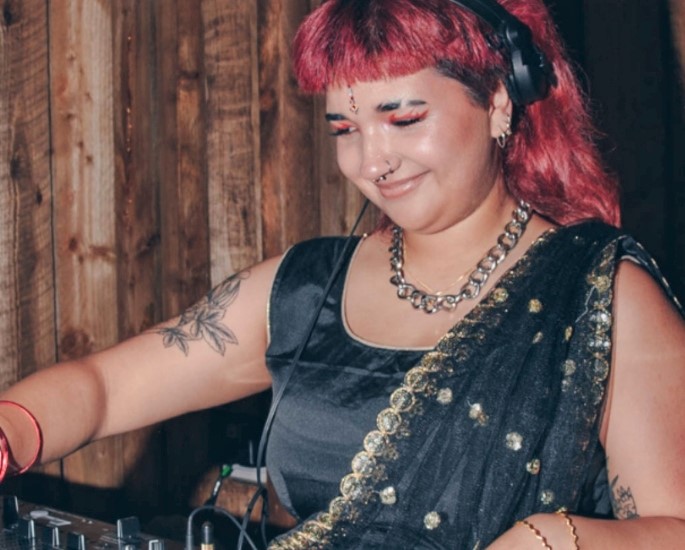 I’ve always been musical and played in indie/rock/punk bands since I was a teenager.

When I moved away from home, it wasn’t really an option to bring my drum kit with me so I sold it when I was 20 and didn’t play again until this year (2022).

When I was 19, I threw a big flat party but couldn’t find anyone to DJ dancehall & UK funky.

So, I decided to learn to DJ myself to play the music I wanted to hear.

The set was so much fun, I realised I’d found something I loved and then DJing became a way to still enjoy performing/expressing my passion for music.

What’s your creative process like when coming up with a mix?

Because of my sense of rhythm, I picked DJing up fairing quickly and really enjoyed the art of blending different tunes together.

I’m a really quick blender, I have a short attention span when it comes to DJing.

“I’m constantly switching up the genre or tempo!”

I really love blending tunes you wouldn’t expect to gel together or throwing in a silly bootleg of a throwback.

I’ve definitely improved technically over the past few years and enjoy playing around with chops and loops.

How does it feel to be a part of SFTOC Festival? 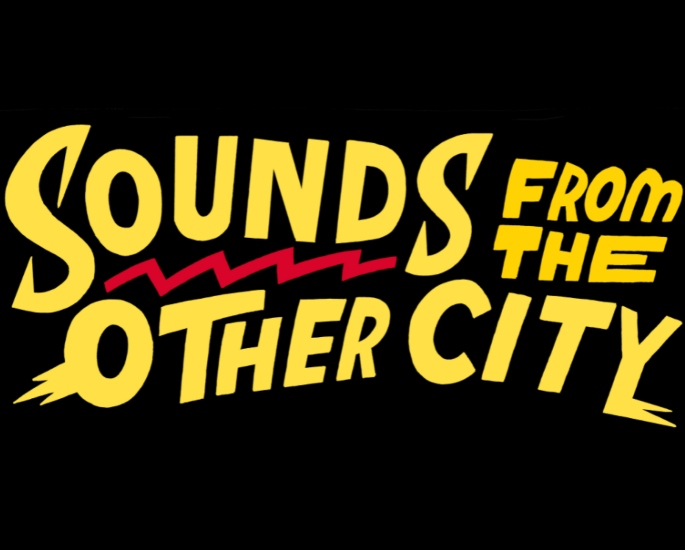 I’m super excited to be a part of SFTOC Festival and to curate a Daytimers stage to complement the lovely vibe the festival is known for!

I’m going back to back with one of my favourite DJs and this lineup is going to blow people away!

But I’m really proud of how representative this lineup is of all the fantastic brown talent out there.

Massive big ups to Chandé and Ahsan for working with me on this one!

Why do you mostly perform in cultural wear?

I sometimes perform in a lehenga because it’s important to me to feel connected to my family’s culture.

“I feel safe and celebrated wearing clothes that make me feel good!”

It’s been so lovely to see other people come to shows wearing their own cultural clothes or fusing elements with usual clubwear.

I feel like it’s quite crazy but so good to see at the same time.

What are you look forward to the most at the festival? 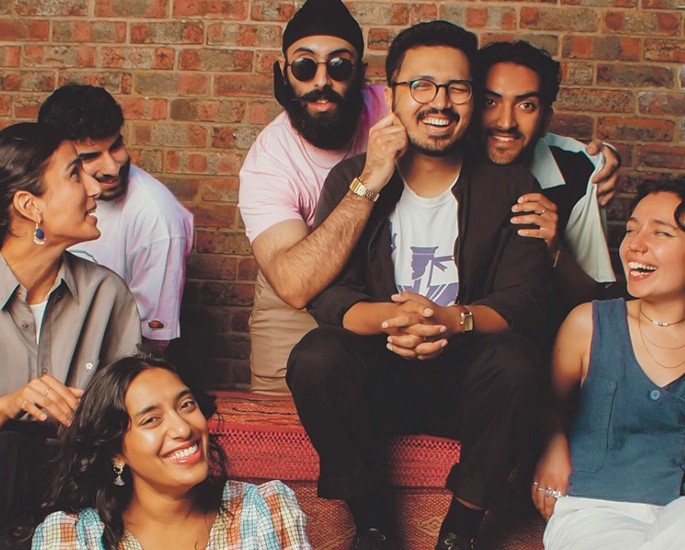 I love playing live, for me music is a group activity and it’s important to me to feel connected to the crowd and for them to know I’m having as much fun as them!

I’m so excited to see lots of friends on the SFTOC lineup including Bristol’s insanely talented Grove and Sheffield queer-ran venue and collective, Gut Level!

I’m looking forward to finally seeing Nayana Iz live and of course everyone on the Daytimers’ lineup!

The Daytimers is a collective for South Asian creatives of all disciplines.

It’s been super important in showing the industry that there’s loads of brown history in the music scene.

It’s vital to acknowledge and celebrate that through supporting all the new brown talent around the world.

As a female British Asian DJ, what difficulties have you faced?

As a femme, brown DJ obvious barriers of sexism and racism come into play when trying to participate in the music scene.

This includes blatant online racism, tokenism from promoters and microaggressions at shows.

Luckily I have a massive community behind me who always have my back so I never feel disheartened by these barriers.

I think it’s important to keep using whatever platform I have to speak out against systemic racism.

But also other issues such as transphobia, sexism and homophobia which affect my community in the music scene.

Music has always been something I do because it makes me feel happy.

I want to continue to find joy in music and help pass that onto other people, particularly those who don’t feel there’s a space for them in the scene.

There’s no denying that Gracie T is a breath of fresh air within the music scene.

Her illuminating style, cultural pride and distinct sounds make her one of the hottest DJs circulating in the industry.

The SFTOC Festival will surely be another event that the DJ smashes, leaving fans feeling wildly excited for what’s to come next.

Not only is she representing her British and South Asian backgrounds but helping to break barriers for similar artists.