Hundreds of fans gathered in Coventry to pay tribute to late singer Sidhu Moose Wala who was shot dead in Punjab.

"It was a fun gathering, a very peaceful, lovely day.”

It is clear that Sidhu Moose Wala had a global following as hundreds of fans gathered in Coventry to pay their respects.

News of his death devastated millions of fans around the world and in Coventry, an event paid tribute.

Music was played and free food was served to the locals as communities came together to remember the late music artist.

“He was murdered, but we did not talk about that, it was more of a tribute because it was his birthday on Sunday (June 12).

“A lot of people gathered and we served food to the community, like samosas and pakoras.

“It was fun, we had entertainment and music blasting, and we had Indian tractors and motorbikes as well.

“It was a fun gathering, a very peaceful, lovely day.”

Sunny went on to say that the response from locals was “brilliant” and people from different backgrounds attended.

He told Coventry Telegraph: “Everyone just listened to the speeches and messages, everyone had a good time, and it was nice to see families come out. It went very smoothly.” 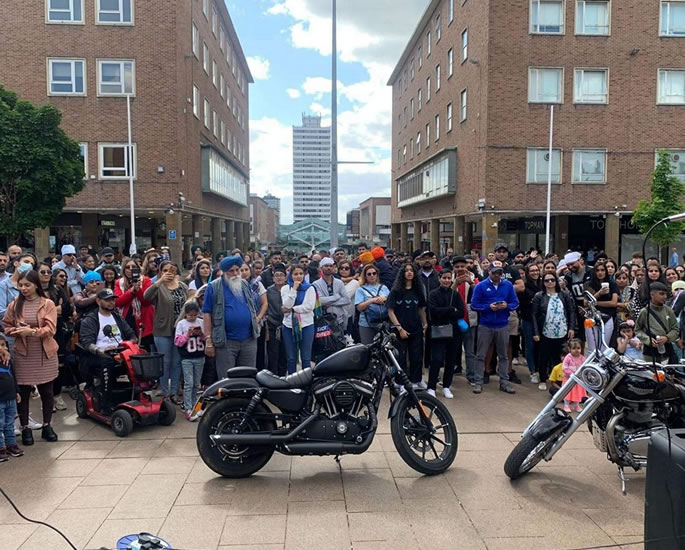 Meanwhile, the investigation into Sidhu Moose Wala’s death is ongoing.

The SIT is being headed by Inspector General of Police Jaskaran Singh.

Ban said: “The SIT headed by Inspector General of Police Jaskaran Singh is making steady progress in the investigation and connecting the dots by working on the leads gathered so far through interrogation of the suspects already arrested and other inputs.”

The Patiala House Court instructed the Punjab Police to arrest Lawrence Bishnoi, who is suspected of being linked to the case.

During a hearing on June 14, 2022, Punjab Advocate General Anmol Rattan Sidhu assured the court that the state would be fully responsible for ensuring the safety of Bishnoi.

The plea of the Punjab Police was contested by Bishnoi’s lawyers on the grounds of his security in their custody.

After getting the transit remand of Bishnoi, Punjab Police on Wednesday brought the gangster from Delhi to Mansa.

Before bringing Bishnoi to Mansa, his medical examination was conducted at the Ram Manohar Lohia Hospital in Delhi.

The gangster will also undergo another medical examination prior to his appearance before the Chief Judicial Magistrate in Mansa.