MMA fighter Faisal Malik is still in the early stages of his career but he has high goals, aiming to be the first British-Asian UFC champion.

"My whole life is dedicated to MMA"

MMA fighter Faisal Malik has revealed that he aims to become the first British-Asian UFC champion.

He has just been signed to European MMA promotion Cage Warriors but he aspires to headline a UFC title fight in the Pakistani city of Lahore.

The 27-year-old has a 5-0 record and is currently waiting for his first Cage Warriors bout.

But he is confident that he will make it into the UFC, arguably the world’s top MMA promotion.

He told BBC Sport: “It’s clearly the path I want to take.

“I’m ready to jump into Cage Warriors and show what I’m made of.

“Since I went pro, I’ve finished all my fights in one minute. I’m looking to keep that going.”

Faisal began boxing before learning Brazilian Jiu-Jitsu at the age of 16.

He said he was so prolific in tournaments that coaches of other fighters would wait outside for him.

Faisal recalled: “They’d be like: ‘Show us your ID. Who are you? You can’t be doing this’.

He soon discovered MMA and the UFC.

Faisal explained: “I was Googling places to learn.

“My brother found a place and so did my friends. So I went, tapped out millions of times and I was like ‘damn, I need to learn this’.

“When I was about 22, I went pro. My whole life is dedicated to MMA because this is not a joke.”

Faisal Malik’s role model was his grandfather, who had his own combat sports success as a wrestler in Pakistan.

Faisal was also inspired by Mike Tyson but in MMA, he says:

“That’s why I’ve got them in my gym. My biggest inspiration are these two and how they approach defining themselves as a human being, the way they carry themselves – in the cage and outside.”

The Luton-based fighter stated that he has dreams to take the UFC to Pakistan.

Faisal Malik said: “That’s where my roots are.

“So just to go back there… imagine how crazy that would be.

“By promoting MMA in Pakistan it will promote the whole MMA scene and guys will start coming through.” 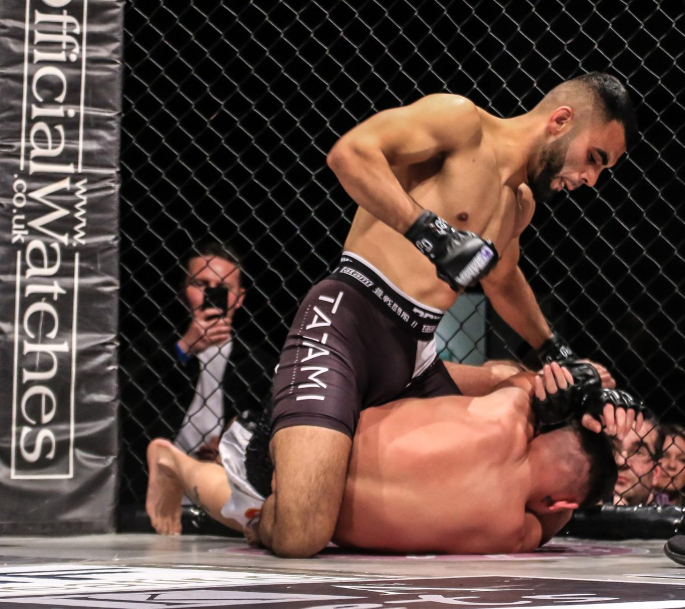 Faisal admitted that his family were initially worried, but are supportive of him.

“What they didn’t like was when I started to get more and more serious, but my dad always had my back.

“At first they thought I’m just doing this to lose weight because I was overweight until about 19 – about 110 kg,”

Faisal, who fights at bantamweight (61kg), eats and lives healthier.

“They support me. They don’t like me getting punched in the face, but they always back me.”

He may be still early in his career but Faisal plans to open a gym in Luton and offer free lessons to underprivileged young people.

He said: “MMA is fairly new and around where I’m from there’s not really a gym.

“I’ve got seven coaches for different disciplines. I want to bring everything in-house so those kids won’t need to travel up and down the country.”

Faisal says his goal is to show “anything is possible”.

He continued: “I was overweight and I was from the streets and now I’m a professional fighter, 5-0 and on the verge of firing into the UFC Insha’Allah.

“I want to help the kids suffering with mental health, even adults. I believe physical fitness is the number one medicine.

“My goal from the gym is pretty much to create high-level fighters, I’m talking UFC world champion.

“I want to show that if I can do it, they can do it too, and I want to help as much as I can along the way.”

Faisal Malik is confident that he will make it into the UFC soon, describing himself as an “animal”.

He added: “I reckon in about two to three fights I’ll be in the UFC – it could happen.

“There’s so much more to my game than anyone’s ever seen because I’ve been smashing through this lot in one minute.

“I’ve seen the champion in Cage Warriors, I’ve seen all these guys. I’ll smoke him.

“I’ve got to stay humble and not waste my time. But it will come soon. I’ll be ready.”

Dhiren is a journalism graduate with a passion for gaming, watching films and sports. He also enjoys cooking from time to time. His motto is to “Live life one day at a time.”
Babar Azam to Marry Cousin in 2022?
R Ashwin reacts to Ollie Robinson’s Suspension for Racist Tweets