Deepika and Times of India in Cleavage Row

Times of India released a link to a photo gallery dedicated to Deepika Padukone’s cleavage on Twitter. Deepika stood up for herself by giving a fiery response, and has received huge support from fans and celebs alike.

“They think @deepikapadukone has a cleavage. I think she has got a spine.”

Beloved Bollywood actress Deepika Padukone has been the talk of town as she expressed her anger towards biggest news organisation, Times of India on September 14, 2014.

Times of India Entertainment tweeted a link to a web photo gallery with the caption: “OMG: Deepika Padukone’s cleavage show.”

The clips shows Deepika wearing a low cut dress designed by Anaita Shroff Adajania for the trailer launch of Chennai Express in 2013.

Rumour has it that this is the second time the Times of India has reported on the dress in a negative light.

Deepika expressed her rage and added: “Dont talk about Woman’s Empowerment when YOU don’t know how to RESPECT Women!” 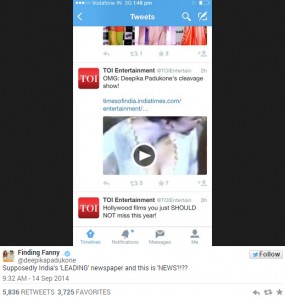 She continued to slam Times of India with a screengrab of the tweet by Times of India: “Supposedly India’s ‘LEADING’ newspaper and this is ‘NEWS’!!??”

Fans and Celebrities all took to twitter to support Deepika with the hashtag trend #IstandWithDeepikaPadukone. This has become the top trend in India, with hundreds applauding the actress for her courage in making a stance:

“Appalled….Shocked and disgusted at the level of disrespect shown. Deepika or any woman in the world cannot and should not stand for this!!” Karan Johar tweeted.

Priyanka Chopra supported Deepika as she tweeted: “Well done @deepikapadukone ! Taken a stand for all of us. Xoxo.”

Alia Bhatt added: “Seriously ballsy of @deepikapadukone to take on the media and call them out on their hypocrisy!! Our silence is always taken for granted!”

The rage spread to even columnists in different Indian news outlets, with many rival news outlets joining with Deepika.

Hindustan Times columnist Madhavan Narayanan also took to twitter and tweeted: “They think @deepikapadukone has a cleavage. I think she has got a spine.”

Although Deepika and her many fans criticised Times of India for tweeting the gallery, Times of India replied stating that they were only complimenting the actress: “@deepikapadukone It’s a compliment! You look so great that we want to make sure everyone knew! :).” 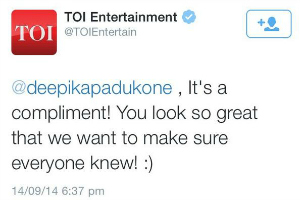 Many of her peers took to twitter to express the failure of Times of India Entertainment for trying to patch things up.

Boman Irani, who worked with Deepika in Happy New Year tweeted: “Complimenting a lady is a grace reserved for gentlemen! I stand on a tall tall chair and applaud you @deepikapadukone.”

Farah Khan, director of Happy New Year tweeted: “Above all, be the heroine of your life, not the victim. @deepikapadukone doing just that!! (N THATS how u pay a compliment).”

Homi Adajania, director of Padukone’s latest film, Finding Fanny tweeted: “We just slam ourselves back into the dark ages! Reputed channels inciting regressive s***. What are they thinking?! Sad!”

Deepika has received a lot of support from fans and it is refreshing to see many stars supporting each other. Could this be the beginning of a new wave of female empowerment in Bollywood? What do you DESIblitzers make of this?

Harpreet is a talkative person who loves to read a good book, dance and face new challenges. Her favourite motto is: “Live, laugh and love.”
Finding Fanny ~ Review
10 Reasons Why We Love Fawad Khan