Narendra Modi’s government have announced that three of India’s controversial farm laws will be withdrawn.

"We are repealing the farm laws."

The farm laws in 2020 had caused a lot of controversy as the government said the laws would benefit farmers, allowing them to export their goods anywhere in the country.

However, farmers believed it would affect their livelihoods, leaving small growers vulnerable to exploitation and ultimately for the withdrawal of the fixed fee they receive for goods, the Minimum Support Price.

This resulted in widespread protests across the country. It resulted in clashes with police and the deaths of hundreds.

Now, more than a year later, the farm laws will be repealed by the end of November 2021.

In an address to the nation, Mr Modi said:

“We tried our best to explain to farmers. We were even ready to modify the laws and then suspend them too.

“The matter reached the Supreme Court as well.

“We haven’t been able to explain to our farmers. This is not a time to blame anyone.

Mr Modi said that the government will finish the process of withdrawing the three laws in the upcoming parliament session.

India will begin its winter session of parliament on November 29, 2021.

The PM also requested for protesting farmers to “go back to their homes”.

Rakesh Tikait, the leader of one of the largest farmer unions, said protests will continue and farmers will wait until the laws are formally withdrawn in parliament.

He said: “The agitation will not be taken back.

“We will wait for the day when the farm laws will be scrapped in the parliament. Government should talk on other issues of farmers too, besides Minimum Support Price (MSP).”

However, the union will also wait for the announcement to take effect.

In a statement, the union said:

“If this happens, it will be a historic victory of the one year long farmers’ struggle in India.

“However, nearly 700 farmers have been martyred in this struggle.

“The central government’s obstinacy is responsible for these avoidable deaths, including the murders at Lakhimpur Kheri.”

Farmers in Punjab and Haryana are celebrating the news, raising flags and distributing sweets. But they say the fight is not over.

“This is wonderful news! Thank you, Narendra Modi for taking back the farm laws.

“Thank you, farmers, for raising just demands through peaceful protests.

“Hope you will happily return to be with your families on the Parkash Purab of Sri Guru Nanak Dev Ji today.”

Diljit Dosanjh, who has actively supported the farmers, also expressed his relief. 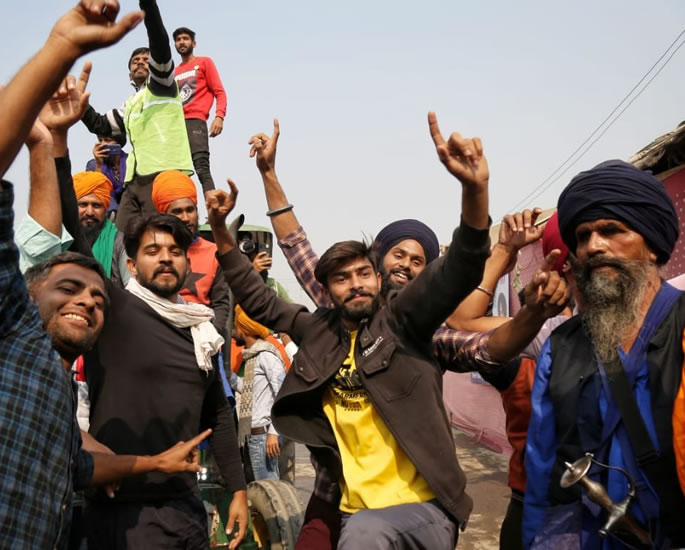 “This is truly amazing. It is a historical victory on this day of Guru Nanak’s birthday.

“I have shed tears of joy and relief. I am still processing. It is cathartic. It’s like my farmer roots have been watered. I have no words.”

“For someone with a carefully confected reputation as a ‘hard man’ who’d never back down, this is a humiliating retreat.

“He may have backed down for his own political calculations but it is the strength and resolve of the farmers that has made him bite the dust.

“This is only the start though. Millions will be inspired now to get rid of Modi and the cancer on India’s soul that is hate-fuelled, anti-minority communalism.”

“Today, when we’re all celebrating Guru Nanak’s birthday, 552nd birthday today, who himself was a champion, guardian and saviour of downtrodden, a farmer in his last days.

“When he did farming himself at Kartarpur, which is now in Pakistan.

“And today, when the draconian laws are repealed, it simply says that Guru Nanak was not only a Babar but also a farmer.

Opposition leaders have called the repeal of the laws a victory for the farmers.

“Repealing of black laws a step in the right direction …. Satyagrah of Kisan morcha gets historic success…. Your sacrifice has paid dividends…. Revival of farming in Punjab through a road map should be the top priority for the Pb (Punjab) govt ….accolades.”

Repealing of black laws a step in the right direction …. Satyagrah of Kisan morcha gets historic success…. You’re sacrifice has paid dividends…. Revival of farming in Punjab through a road map should be the top priority for the Pb govt ….accolades

However, others thought that the announcement might work to win votes ahead of important elections in Punjab and Haryana.

Dhiren is a journalism graduate with a passion for gaming, watching films and sports. He also enjoys cooking from time to time. His motto is to “Live life one day at a time.”
Thief stole £40k worth of Car Parts from Dealership
Ryanair fly Couple to Wrong Country then Blame them for Error