Sat Sandhu the aspiring Bhangra singer and artist from France smashes out ‘Boom Boom’ his second offering from his French Bhangra music camp. The song with an upbeat tempo and catch lyrics definitely gets you into the mood to hit the dance floor! Available now on all downloads sites and music stores.

the first Bhangra artist to come out of France

Sat Sandhu is back after the smash-hit success of Dil Dhak Dhak (My Heart Goes Boom Boom)! The Indian ‘Lady Killer’ from Paris, presents a new and even stronger track simply called, Boom Boom.

Sat Sandhu is a talented, self-trained dancer and singer from France. He masters the new generation of Bhangra that mixes the dance of Punjab and contemporary music styles.

The single, Boom Boom, co-written by the singer and his father, enchants the audience with its lyrics: a colorful combination of Punjabi and English terms. The rhythm gets you from the very first notes. The video-clip invites viewers to plunge into a world of celebration and joy. 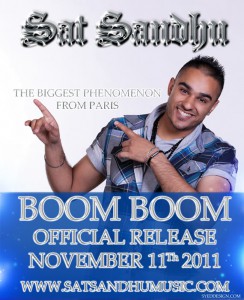 Born and raised in Paris, Sat Sandhu, is the first Bhangra artist to come out of France. The talented 22 year old has not only been recognised for his raw talent as a Bhangra artist but as a born entertainer and performer.

Sat’s musical career started in 2005 when himself and his brother started a Bhangra dance team called Shaan-Punjab-Di. Although backed by a supportive family, Sat explains that it was hard at the beginning trying to get their music recognised ‘I worked hard and trained myself and the rest of the group. I became leader of the group and after five hard years we became the number one Bhangra team in Europe.’

After five successful years together, Sat decided to venture out on his own to conquer the world of Bhangra. Sat who is a trained dancer & also plays the Dhol professionally, has always been drawn to the world of arts since a young age. However it was as a teen that Sat realised that most of the musically inspirational people to him were non-Asian and it was this that fuelled him to show his peers in France his heritage and culture via his love for Bhangra music hoping one day to become a role model for other aspiring artists.

Convinced that his future lay in singing, he gave up his studies after earning a 2-year degree in Physics and decided to fully devote himself to his singing career.

Watch our exclusive interview with Sat Sandhu, during a visit to the UK and the official video of the catchy Boom Boom song:
[jwplayer config=”playlist” file=”https://www.desiblitz.com/wp-content/videos/ss251111.xml” controlbar=”bottom”]

Although Sat Sandhu is not one of a long line of singers and dancers, he was exposed from an early age to the performances of great Punjabi singers such as Kuldeep Manak – who he knows personally; as well as other famous Nusrat Fateh Ali Khan and Michael Jackson who are a true inspiration to him.

The originality of Sat Sandhu lies in his new songs that combine elements from his culture of origin with a French Touch. 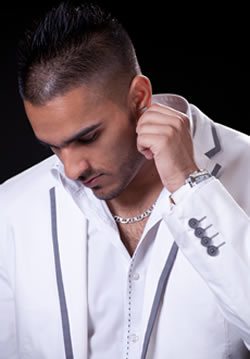 He regards his work as an Art. He says: “Art is another world, a world of magic”.

The artist’s ambition is to bring happiness to people through festive songs that make you want to take life by the horns. He has already started working on a third single.

For this very promising and creative young artist, the release of his second single is an important event in terms of work and the significant means invested.

In order to control all stages of the creative process, the artist founded his own production company: STAR FIRE PRODUCTION. It is one of only a handful in France to produce Indian music.

Sat Sandhu is a prime example of how Bhangra music is spreading across Europe and bringing us styles and touches from the European mainland. This artist is showing that dedication and commitment to your music can certainly make his fans feel the Boom Boom!

The single Boom Boom by Sat Sandhu, the aspiring French Bhangra star is officially out on 11th November 2011 and available from all respectable download sites and music stores.

Jas likes to keep in touch with the world of music and entertainment by writing about it. He does like hitting the gym too. His motto is 'The difference between the impossible and the possible lies in a person's determination.'
UK Immigration arrests Garry Sandhu
A Tribute to Kuldeep Manak