Best Belly Dancers of India you Have to See

Belly dancing is an exquisite dance form with many dancers garnering huge followings worldwide. We look at the top belly dancers from India.

"My goal is to give belly dance its due credit as an art form in India."

Belly dancers are some of the most popular dance performers to watch because of the difficult routines which are performed.

Belly dancing is an ancient form Arabian dance form which emphasises complex movements of the torso.

It has since evolved to take many forms depending on the country and region, both in costume and dance style.

It is one of the most famous dance styles which has inspired dancers all over the world to pursue their dance passion in belly dance.

Belly dancing in India is incredibly popular with many professional dancers originating from the continent.

They capture the audience’s imagination with their intrinsic variations on the classic dance type.

We look at the top belly dancers from India and how they came to be some of the world’s best. 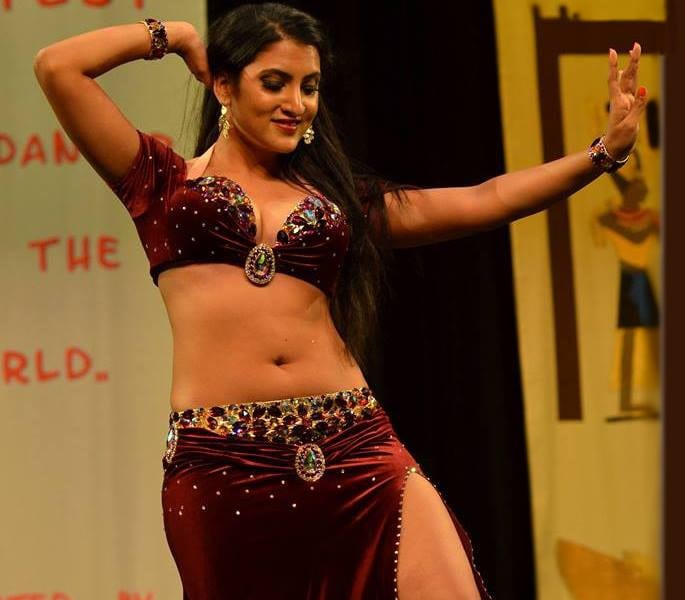 Payal Gupta has been passionate about all dance forms since the age of seven.

She comes from a diverse cultural background where performing arts are given huge attention.

Payal took dance classes through her college life when studying for her engineering degree.

However, her passion for dance made her opt to showcase her skills to the world.

Her belly dance style is mainly Egyptian and Arabic fusion, which she can perform incredibly well with tremendous control and precision.

She also does modern contemporary and Bollywood freestyle.

Payal learnt her skills from many respected dance instructors from all over the world such as American Sadie Marquardt and Nadia Nikishenko of Russia.

She also holds a record in the field of belly dancing in the ‘Indian Book of Records’.

She said: “My goal is to give belly dance its due credit as an art form in India.” 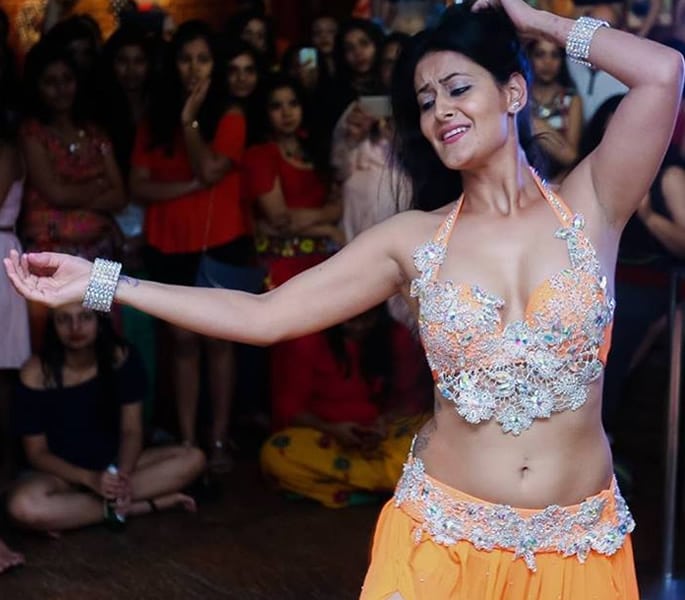 One of India’s most famous belly dancers stepped into the limelight as a contestant on India’s Got Talent.

Meher Malik was a dance enthusiast from a young age and began belly dancing as a child.

It was when Meher entered her first dance competition at the age 13 where she decided that belly dancing was something she wanted to pursue.

She quit her studies to take it up full time, however people around her did not take the dance seriously.

They saw it as a source of entertainment money can buy.

Her popularity skyrocketed when she was a contestant on India’s Got Talent in 2009.

It gave her the opportunity to set up her dance studio which has gone from strength to strength. 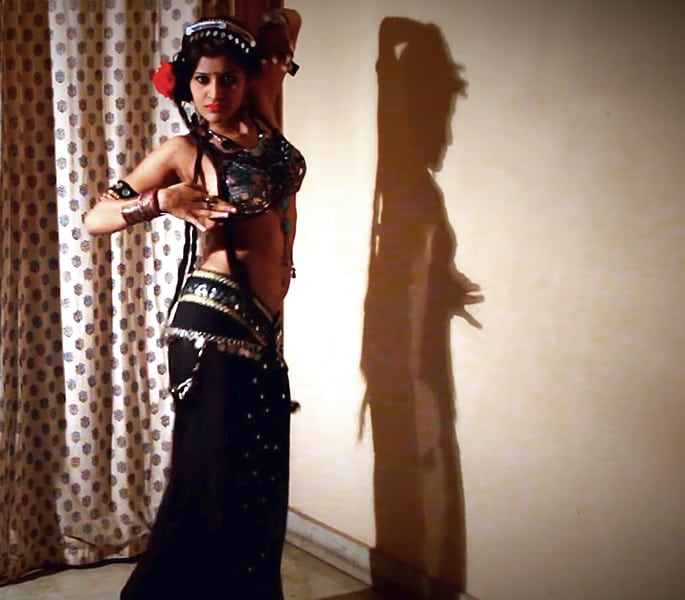 The 23-year-old first came across belly dancing when she saw a video by Ukrainian belly dancer Alla Kushnir.

Seeing it rhythmically performed while making it look so easy inspired Mohnaa to take up the dance style.

She sees belly dancing as a way for people to accept the way they are.

Mohnaa experiments with a variety of belly dance styles such as American tribal style, shaabi and fellahin.

She has mastered the control of belly movements for traditional belly dancing extremely well and works very much int time with the beats played.

Her love for hip-hop has seen her fuse it with her belly dance performances.

She plans to make more dance covers of music in the future.

Shrivastava also intends to carry on her career as a lawyer, which is the complete opposite of belly dancing. 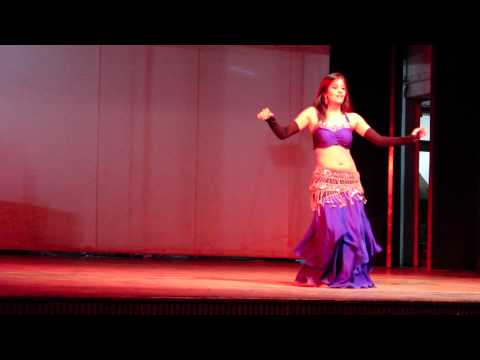 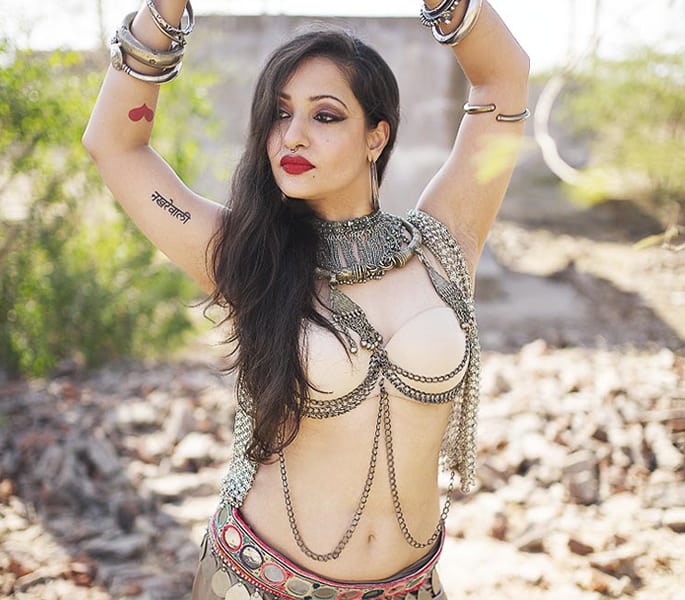 Dipika Vijay hails from Mumbai, India. She labels herself as a movement artist who specialises in belly dancing as an art form.

Dipika started to earn belling dancing over 10 years ago and was instantly attracted to the exotic rhythms and sensuous movements of the dance.

Using her education in design, Dipika began to explore the science of the human body and its movements related to belly dancing.

She sought the help of renowned teachers and yogis. This led to her learning how the internal mechanisms of the body can be used to create this delightful dance form.

Dipika teaches belly dancing to students and helps them understand the techniques of breath control with specific movements and sensations to produce high-quality dance movements.

Dipika feels belly dancing can help you generate greater awareness of the mind, body and spirit.

The sensuality of belly dancing is something Deepika cherishes and likes to use her movements to create form, and form, to then shape thoughts.

Through her classes in Mumbai, she is helping women to embrace their bodies and freeing themselves to achieve their true potential, through belly dancing. 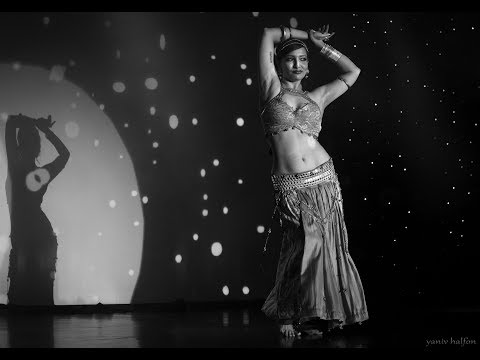 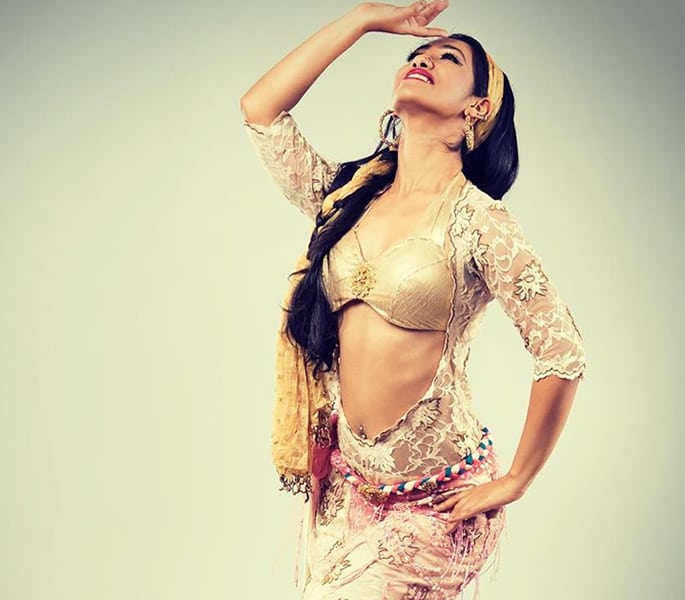 Debapriya Das was introduced to belly dancing when she was eight and what originally started as a pastime became her passion.

She attended more classes to develop the knowledge needed for a belly dancer.

It is knowledge one needs to have to understand belly dance as a movement language.

“The oriental style is an amalgamation of various Egyptian folkloric styles and the classical style.”

Currently, Debapriya and her team are collaborating with Lahe Lahe, a performance space in Indiranagar.

She is intending to create a monthly performance lab for belly dancers and enthusiasts in Bangalore.

It is to provide a platform for dancers to showcase their work.

Debapriya has pursued belly dancing because of the rich cultural history of the dance. As a result, it makes her one of India’s most prominent belly dancers. 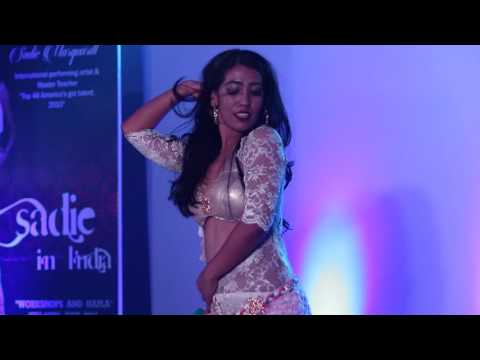 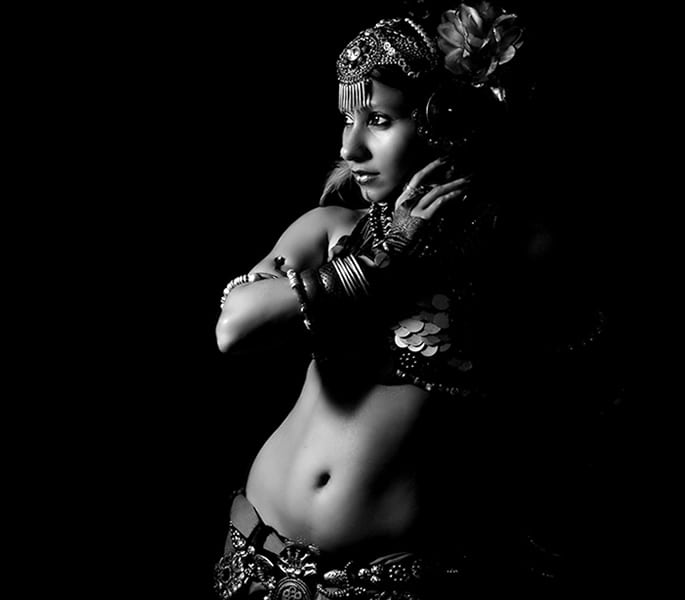 Bindu Bolar always wanted to dance but it was only encouraged as a hobby. She began with Bollywood dance form and later taught it.

Her interest in belly dancing started when she watched Shakira’s music video for Whenever Wherever and was intrigued by one movement.

She said: “I was a Bollywood dancer back then and this strange kind of step sparked a lot of interest in me to try and do it.”

“I used to stand for hours in front of the mirror and start practising it.”

Bindu initially trained in the classical style of belly dancing but soon came across Tribal Fusion Belly Dance, which is now her preferred style.

This dance style reflects Bindu’s own personality as it is intense and dark, yet beautiful.

After 15 years of professional dancing, Bindu is the director of dance studio ‘Lights Camera Dance’ and is teaching students the Tribal Fusion Belly Dance style. 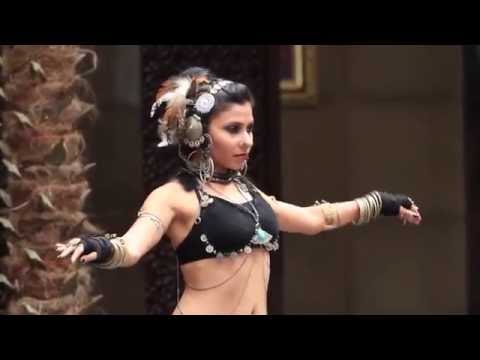 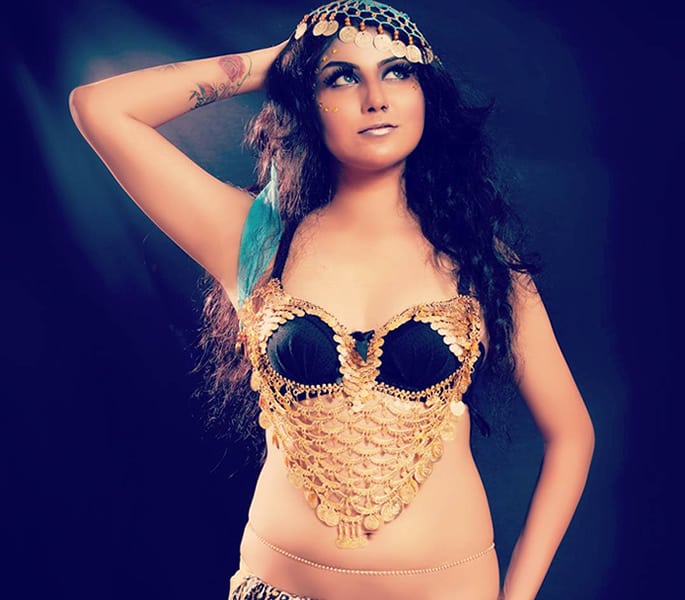 This dancer is versatile in her styles of dancing having begun training in classical Indian dances as well as Western forms of dancing.

Her passion, however, is belly dancing.

Maya’s specialist style of belly dancing is Tribal Fusion which has seen her win several belly dancing competitions throughout India.

This includes winning at Gusto 9 in February 2015 in Pune.

What makes it so fascinating is that Maya started training in belly dancing with the help of the internet, she didn’t learn under a dance teacher.

Her vast experience is now shared with her dance students at the Cafe Solo Baila Dance Studio. 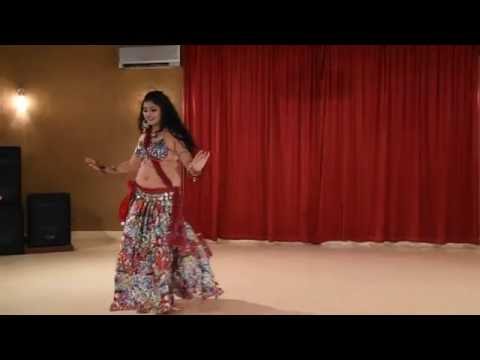 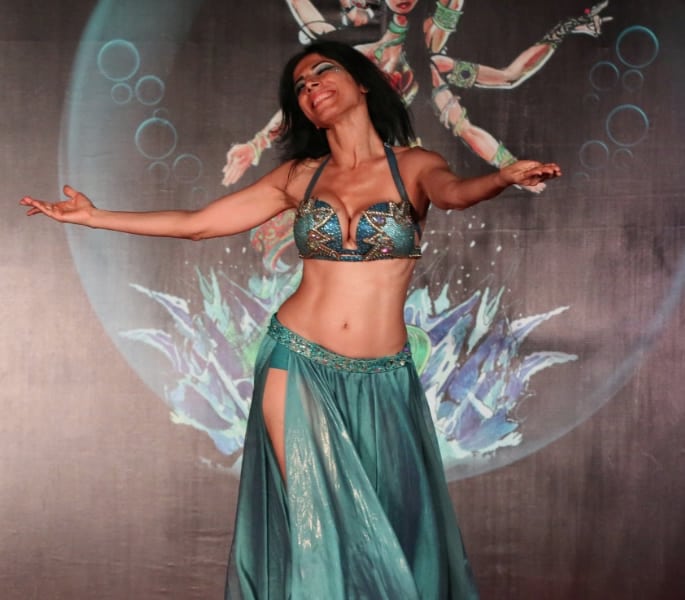 Leena Viie (Leena Vaswani) is from Mumbai and is a passionate belly dancer who describes her style as a middle-eastern fusion with central Asian ancestral roots.

While her main focus being belly dancing, Leena also cross-trained in other dance forms to derive techniques and flair from other dances into her performances as a belly dancer.

She received training from some of the most renowned belly dancing teachers in Egypt, UK and USA.

Leena has performed on the international stage with appearances in New York, London, Boston.

She left the 9-5 corporate world to travel the world being a free-spirited person. She has used her journeys to develop a dance style which is flamboyant graceful and very individual.

Being a staunch feminist at heart, Leena has been working hard to ensure Bellydance finds its true place as an art form in India. A country where she feels “a misogynist culture threatens its growth.”

She has curated Bellydance Festivals in India for a number of years.

Leena also runs classes across Delhi and Mumbai in India, teaching ‘Bellydance Technique’ and ‘Belly Fitness’. She also specialises in ‘Bellydance Moving Meditation’ which she has performed at dance festivals. 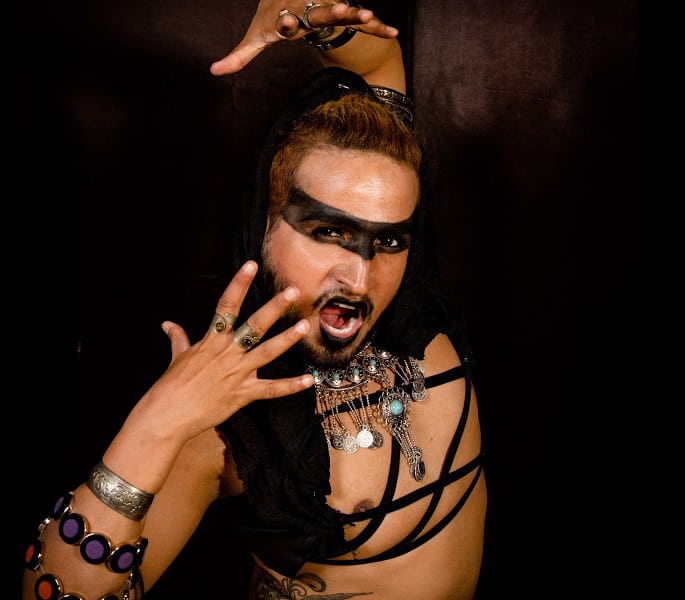 Known as India’s first male belly dancer, Arun decided to learn it when he was 16.

He knew about belly dancing on the Internet and realised that there were very few International male belly dancers.

When Arun first practised it, he instantly fell in love with the dance form.

He began training at the Banjara School of Dance in Delhi and slowly started to perform in shows and festivals.

When he first started, it was difficult as his parents were not happy about his new career as a belly dancer, but slowly they supported him.

Arun specialises in Tribal Fusion belly dancing and has started his own dance school called the Indian Tribal School.

Arun is focused on travelling and performing throughout India in the future as a pioneer of male belly dancing. 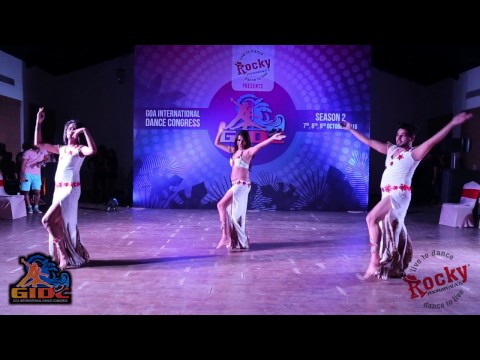 Belly dancing comes in many variations and these dancers showcase the vast spectrum of belly dancing.

Their passion for the art form has made them into some of India’s most prominent dancers.

It is continuously growing and no doubt the passion for this style of dance will most likely produce more noticeable belly dancers from India.