Ranbir Kapoor’s look from ‘Shamshera’ was unveiled and Alia Bhatt was more than impressed with her husband’s look.

Alia Bhatt has reacted to Ranbir Kapoor’s Shamshera look and she was more than excited.

A poster featuring Ranbir’s character was leaked a week before the makers planned to unveil the poster.

Sporting a rugged look, Ranbir is seen in the poster with a stern expression and posing with an axe.

Shamshera is set in the fictitious city of Kaza and it tells the story of a man who became a slave, who then becomes a leader and later a legend for his tribe.

Ranbir’s wife Alia Bhatt shared the poster and it made her day as she wrote:

Soon after Alia shared the post, fans flooded the comments with heart, fire and lovestruck emojis. 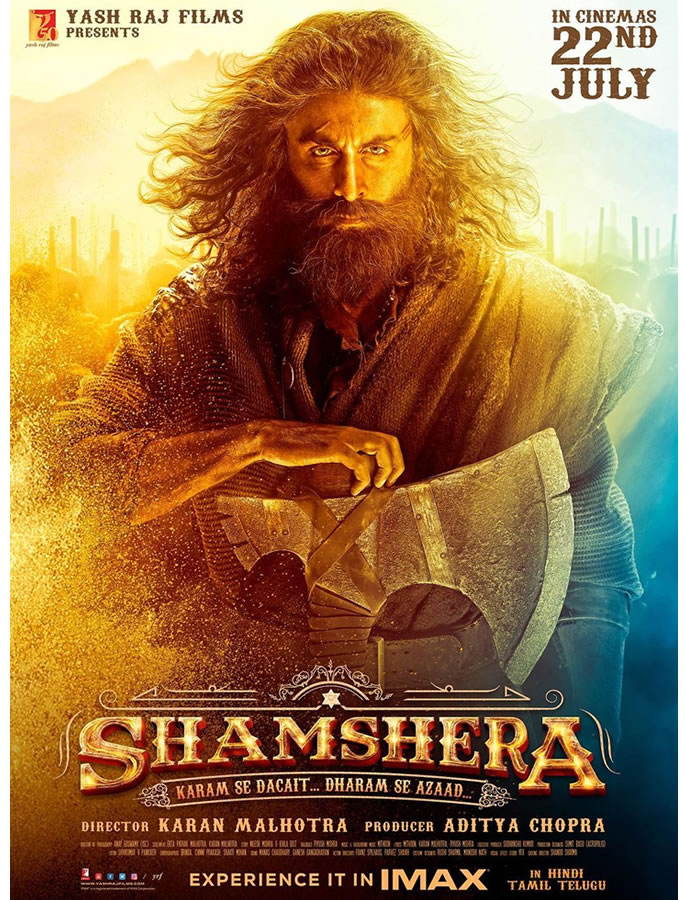 Hours after Ranbir’s look was leaked, Karan Malhotra reacted to it.

Speaking about the leak, he said:

“We keep planning our lives so that we land things at the perfect time but in doing so we forget that the universe is always on time. Incidents like these are a true example of that!

“I’m just happy that people and fans of Ranbir Kapoor are loving his look and the poster of Shamshera.

“We wanted to start our campaign mid-next week, but it looks like fans couldn’t wait for us to begin.

“I don’t blame them. They have waited for too long.”

“Ranbir is returning to the cinemas after 4 years, and it is difficult to control the excitement. I’m just glad that the reactions are great.”

Ranbir Kapoor was last seen in Sanju but he has a number of projects in the pipeline.

He will star opposite Shraddha Kapoor in Luv Ranjan’s untitled romantic-comedy film. The film also stars Boney Kapoor and Dimple Kapadia and is slated to release during Holi 2023.

The film, which is the first part of a trilogy, is expected to release on September 9, 2022.

Dhiren is a journalism graduate with a passion for gaming, watching films and sports. He also enjoys cooking from time to time. His motto is to “Live life one day at a time.”
‘No Entry’ sequel will see Salman Khan in Triple Role
Kajal Aggarwal shares glimpse of newborn Son