US Indian Bride wears Suit for her Wedding

A US Indian bride moved away from traditional clothing for her wedding. Instead, she tied the knot in a pantsuit and explained why.

"I loved them and I wore them all the time."

A US Indian bride delivered a bold fashion statement by wearing a powder-blue pantsuit for her wedding.

They had planned to get married in the US and have a second ceremony in India, however, the pandemic derailed their plans.

Sanjana explained that while her family were accepting of their live-in relationship, “there was a lot of external pressure from friends, neighbours and extended family to formalise the relationship”.

So, in late August, “one fine morning I woke up and said, ‘let’s just get married’.”

At that moment, Sanjana knew that she would be wearing a pantsuit and knew the exact one. She said she saw the suit in a boutique in Italy a long time ago.

“It was a pre-loved vintage suit, made in the 1990s by Italian designer Gianfranco Ferré. I was surprised and delighted to know that it was still available when I decided to get married.”

When she worked as a corporate lawyer, suits were her choice of clothing because all the “strong modern women I idolised” wore them too.

“I have always thought that there is something very powerful about a woman in a pantsuit. I loved them and I wore them all the time.” 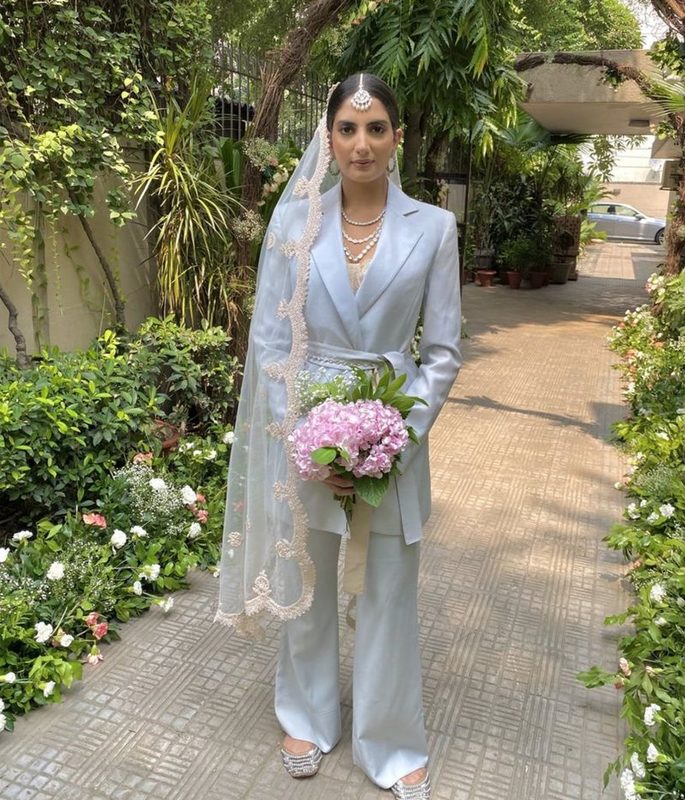 Sanjana also said it made sense because the wedding was a small affair in Dhruv’s backyard.

Dhruv did not expect his fiancée to turn up in a pantsuit but when he saw her, all he noticed was “how stunning she looked”.

A woman’s choice to wear a suit for their wedding has become a growing trend in Western countries but is rare in India as many brides wear elaborate sarees or lehengas.

Nupur Mehta Puri, former editor of a bridal magazine said she had never come across an Indian bride dressed in a pantsuit but said of Sanjana:

“This was something very new. And she really stood out.”

This included Sonam Kapoor’s sister, Rhea, who said her look was “awesome”.

However, some netizens trolled her, saying that Sanjana had brought a bad name to Indian culture. Others warned her husband that he was married to an attention-seeker who would do anything in the name of feminism.

According to Sanjana, some “even told me to kill myself”. 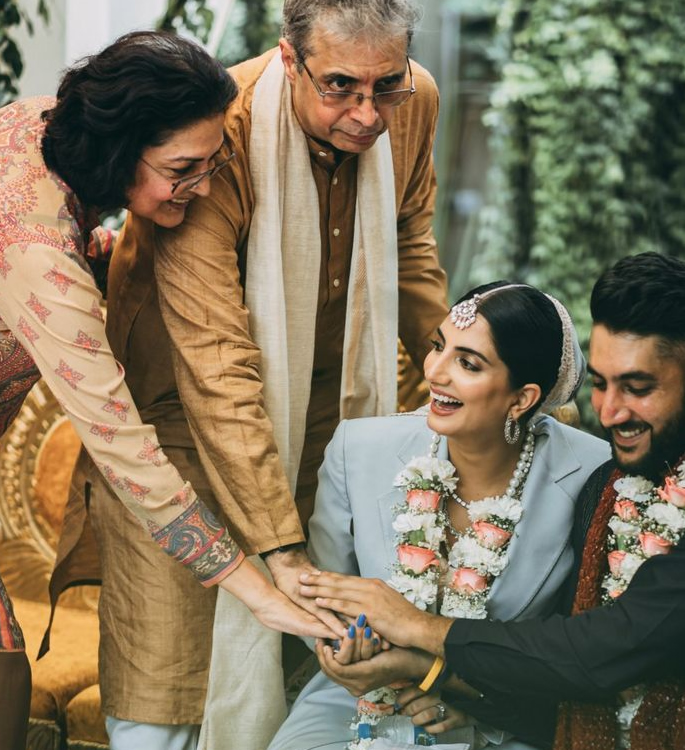 Sanjana explained that she does not understand the criticism since “Indian men wear pantsuits at weddings all the time and nobody questions them – but when a woman wears it then it gets everyone’s goat”.

“But I guess it’s because women are always held to stricter standards.”

The problem with women wearing trousers is prevalent in other countries, not just India.

Although the US Indian bride said that she was not trying to make a political statement, she realises that she may have accidentally done it.

She said: “I realise that not all women, at least in India, are free to wear what they please.

“Once I put out my photographs on Instagram, a lot of women wrote back saying that, looking at my pictures, they had also got the courage to stand up to their parents or in-laws about what to wear at their wedding.

Her decision to wear a suit may spark a new trend for Indian brides. On the other hand, it may simply be just a one-off.