The Restaurants with Sunny Leone, Mia Khalifa & Deepika on their Menu

After a restaurant with Sunny Leone and Mia Khalifa named dishes became famous. A Texas restaurant has named one of its dosas after Deepika Padukone.

An Indian restaurant in Texas, USA, has taken a unique approach to attract attention as well as showcasing their support for Bollywood star Deepika Padukone.

The Dosa Labs restaurant has generated interest by naming one of their dosas after the actress.

Bollywood celebrities have a huge fan following across India and the world. Some fans will go to any extent to express their love for their favourite stars as Dosa Labs has.

On the menu, this quirky dish reads: “Topped with fiery hot ghost chilli and stuffed with our potato mix.”

While it may be said that the restaurant has objectified her, the humour is present as the inclusion of chilli is fitting to the actress.

The ghost chilli is one of the hottest peppers in the world and Deepika is considered to be one of Bollywood’s ‘hottest’ actresses, so its clear that the restaurant has thought about the ingredients which will best represent the actress.

A fan noticed the unique item on the menu and took to Twitter to share a glimpse of the dosa available.

The tweet did not go unnoticed as Deepika and her husband Ranveer Singh saw the menu item.

Both Deepika and Ranveer saw the funny side of the unique food item and took to their Instagram accounts to share their thoughts.

Ranveer had no hesitations about wanting to eat the dosa which was named after his wife. He wrote: “I’d eat that.”

Deepika also shared her love for her namesake dosa. She captioned her post: “Hungry anyone?!” 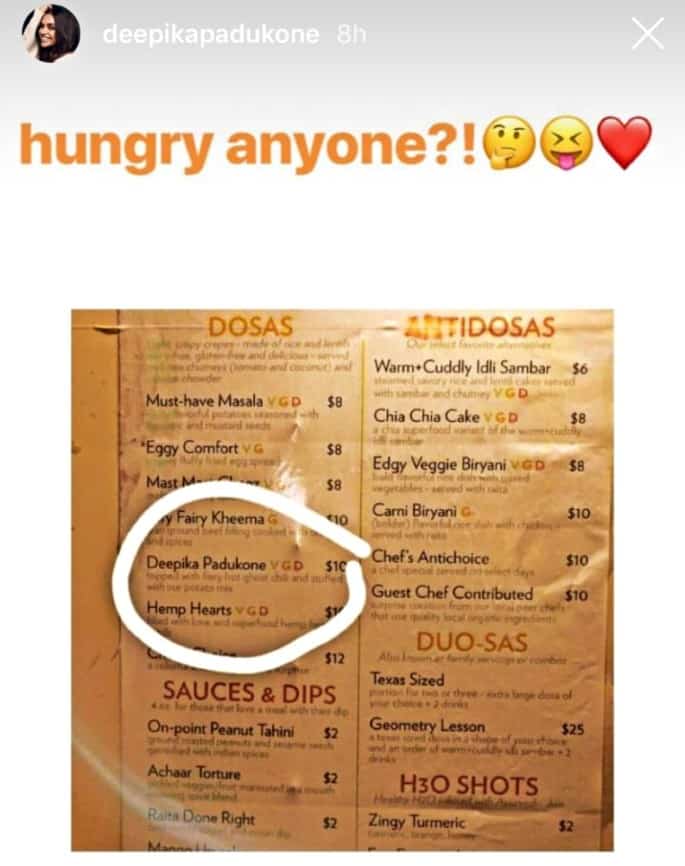 Deepika and Ranveer liked the humorous food name, though they have not yet tried the vegetarian snack!

It is not just Dosa Labs who have named their food after celebrities, one restaurant in Delhi, which is famous for its chaaps (vegetarian soya dishes marinated and cooked on skewers) have attention-grabbing names for their food too!

Its iconic chaaps are named after Mia Khalifa and Sunny Leone.

The Veer Ji Malai Chaap Wale diner is famous for its twist on the vegetarian dishes served with quirky and fun names. 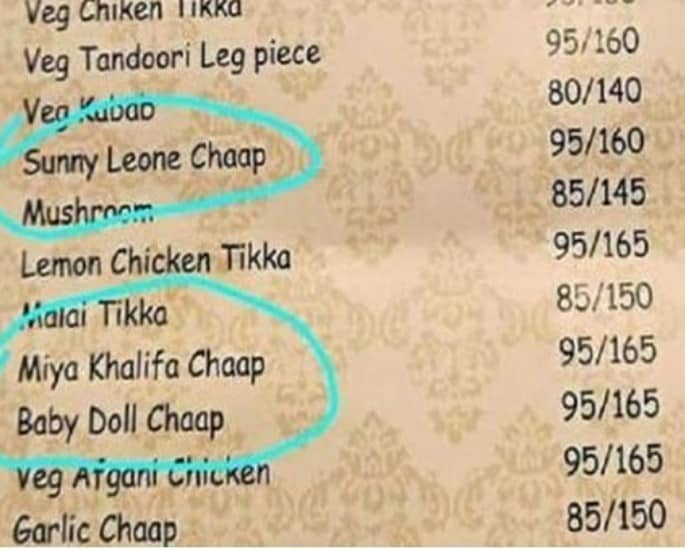 Both food items are vegetarian even though jokes like this would normally be considered a ‘non-veg’ joke.

Sunny Leone and Mia Khalifa have a huge following in India. Therefore, the diner may have named some of their dishes after them as a way of showing their appreciation.

It would be interesting to see what both of them would think if they ordered their namesake dishes.

Both Sunny and Mia would likely see the funny side of being served a dish named after them but would they enjoy the taste.

Only time will tell if they decide to go to the Veer Ji Malai Chaap Wale diner.

It is clear that there are sexual innuendos present when it comes to the dishes as the three women are all ‘on the menu’. But it’s likely that both restaurants have done it in a humorous and light-hearted way.

Dhiren is a journalism graduate with a passion for gaming, watching films and sports. He also enjoys cooking from time to time. His motto is to “Live life one day at a time.”
Best Indian Beers to Drink on a Visit to India
Indian Kebab Recipes to Make at Home