SP Balasubrahmanyam is a unique Indian singer, who with no formal training made it to the heights of playback singing in Bollywood and South Indian films with a career spanning over three decades. DESIblitz met up with this incredible artist to find out more.

"My favourite language is music!"

Sripathi Panditaradhyula Balasubrahmanyam is one of the most successful playback singers known across India. His hits have not been limited to Bollywood but crossed many languages including Tamil, Kannada, Telugu, Malayalam, Tulu, Sanskrit, Oriya, Marathi and Bengali.

DESIblitz had the fortunate opportunity to meet this superb artist, commonly known as SP Balasubrahmanyam, SPB or SP Balu, to find out more about his musical journey. 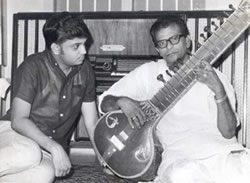 Born on 4th June 1946 in Konetammapeta, Madras Presidency, India, SP Balasubrahmanyam had no plans to become a singer. He wanted to become and engineer. To follow this career path he enrolled for an Engineering course in Anantapur at JNTU College of Engineering Anantapur, where he did very well academically. Due to typhoid he could not continue at the college and ended up in Chennai, as an Associate Member of the Institution of Engineers. 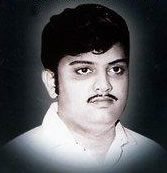 Engineering was the dream at that point for SP Balasubrahmanyam, who at that stage was doing extremely well academically had no idea that he was destined to follow a different path of becoming a versatile and highly respected playback singer.

Balasubrahmanyam’s interest in music was only as a hobby and started at a young age. He self taught himself to play instruments such as the harmonium and flute, while listening to his father, Harikatha. But singing was not something he ever thought about as a career. 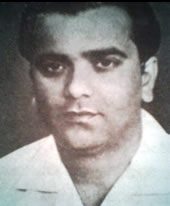 Kodandapani saw the potential and confidence in Balasubrahmanyam which he could not see in himself and encouraged him to pursue singing as a career and said to him, “If you are disciplined and you practice well, for forty years you will be singing.” Which was a tremendous prediction for a singer who has now sung well beyond forty years.

Following the advice, Balasubrahmayam left engineering and regularly visited music composers seeking opportunities to sing. However, it was SP Kondapani who gave him his first break as a playback singer. Balasubrahmanyam made his debut on 15 December 1966 with Sri Sri Sri Maryada Ramanna, a film scored by Kodandapani, who became his mentor.

In the 1969, SP Balu recorded his first non-Telugu song film, called Shanthi Nilaiyam, a Tamil film starring Gemini Ganesan. This catapulted him into one of the the most sought-after male playback singers in both Tamil and Telugu film industries.

AR Rahman’s father, RK Shekhar introduced Balasubrahmanyam to singing in the Malayalam film industry in 1970, in the film Yogamullava.

Watch our exclusive interview with SP Balasubrahmanyam telling us about his remarkable musical career: 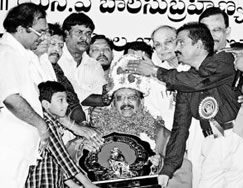 Balasubrahmanyam increased his recording roster in the South Indian film industry and in 1976, recorded up to 23 songs, including 15 duets with P. Susheela in a single day. He recorded 16 songs in just 6 hours For the Kannada composer Upendra Kumar.

Balasubrahmanyam received his first National Film Award for Best Male Playback Singer in 1980 for the film Shankarabharanam, directed by K. Vishwanath. Also, he’s the first recipient of the ‘Ghantasala National Award’ named after the famous and legendary singer Ghantasala Venkateswara Rao, who is immensely admired by SPB.

In 1981, Balasubrahmanyam made his debut in Bollywood by singing for the Hindi film, Ek Duje Ke Liye, starring Kamal Hassan and Rati Agnihotri. He received the National Film Award for Best Male Playback Singer for hit songs in this film including Tere Mere Beech Mein, Mere Jeevan Saathi and Hum Bane Tum Bane. Between 1989 and 1995 most of his Bollywood playback singing was for actor Salman Khan and his movies.

The number of songs recorded by SP Balasubrahmanyam is over 36,000 songs in many South Asian languages. Making him an icon for multi-lingual playback singing. When asked does he have a favourite song, Balasubrahmanyam says:

“How can you pinpoint one amongst 30,000 songs or more? Whichever people enjoy when I sing, are all my favourite songs! It’s very difficult and can take ages to select one particular number” 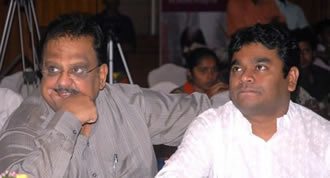 Having worked with many composers both from the South Indian industry and Bollywood, one relationship that is very dear to Balasubrahmanyam is that with AR Rahman. When rehearsing for his first Malayalam film with AR Rahman’s father, he remembers AR Rahman as a toddler playing with toys around the home. It was then years later, AR Rahman approached SPB to sing for his debut Bollywood film Roja, for which he recorded two songs. Subsequently, he recorded many songs with AR Rahman.

Speaking of Rahman, Balasubrahmanyam says, “this person with all the success with all the accolades and internationally getting recognised, got two Oscars for the first time for our country, is still very balanced and a very simple man, a modest and extremely talented person. I always love working with him” 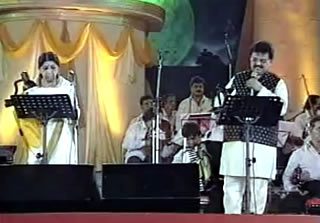 Balasubrahmanyam has sung duets with many of the biggest names in playback singing. Including non other than Lata Mangeshkar and Asha Bhonsle.

Speaking about the experience, SPB says, “Singing along with stalwarts like Lata Ji and Asha Ji is not an ordinary experience, it’s was a great experience. And for a person like me who never trained in music, singing along with them is a great form of training and you can learn so much. They were our guides, our gurus, who took hold of our little finger and made us walk.” 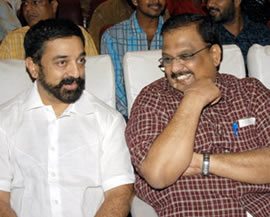 His voice has been used for many actors but one particular actor with whom he is very close is Kamal Hassan. SPB has always been the first choice for Kamal Hassan for many films, both Bollywood and South Indian.

As well as singing SP Balasubrahmanyam has many other talents including acting, composing, hosting television shows, film production and doing voice-overs for many actors in different languages.

As a television host, SPB has anchored shows such as Paadutha Theeyaga on E-TV; Paadalani Undi on MAA TV; a Kannada show called Ede Thumbi Haaduvenu on E-TV Kannada; the Tamil shows Ennodu Paattu Paadungal on JAYA-TV and Vaanampaadi on Kaliagnar TV, and a music show called Sunada Vinodini on TTD Channel. In addition, he has appeared on the judging panel of Sa Re Ga Ma Pa the Hindi music show for talent. 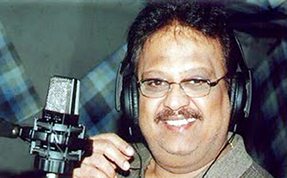 When asked about the changes in the music industry that SPB has experienced, he says, “With all the technology available the soul is missing. I feel the music has become more plastic. Jab hum suntay hai buzurgo ko ghanay.. dil uthta hai..” He acknowledges the dearth of talent that exists in the industry and says, “there is an abundance of talent but I think unless you have a situation in the film which [a song] complements to the film, no lyricist will be attuned to write a good lyric and automatically the composition also becomes lack lustre.”

In his personal life, SP Balasubrahmanyam is married to Savitri and they have two children, namely Pallavi and SPB Charan who is a playback singer and film producer as well.

SPB owns a charitable trust named SP Sambamurthy Foundation, named after his father, an organisation very important to him, which helps under-privelaged and needy people. 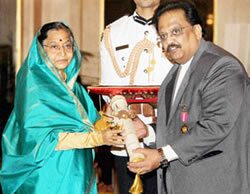 Apart from the numerous filmy awards the he has won, in 2011, SP Balasubrahmanyam was awarded the prestigious Padma Bushan Award by the Government Of India; a Doctorate in 2009 from Satyabama University in Tamil Nadu; in 2001 the prestigious Padmashri Award from the Government of India presented by the President of India Hon’ble K.R. Narayanan, and in 1999 a Doctorate from Potti Sreeramulu Telugu University.

SP Balasubrahmanyam is an example of a singer who ventured into playback without ever planning it but what he has shown is that with dedication, commitment and following the guidance of a mentor it’s possible to achieve incredible respect, achievement and recognition in such an art.

For a singer who has not had formal training, SPB is an incredible asset to the Bollywood and South Indian film industries and an even bigger artistic treasure for India. We wish this unique artist the very best with his musical journey and hope he continues to enjoy his well deserved success.

Nisha has an intense passion for reading books, tasty cuisine and enjoys keeping fit, action films and cultural activities. Her motto is 'Don't put off until tomorrow what you can do today.'
London Indian Film Festival 2011
Kareena Kapoor the new ‘Heroine’?