When is it Right to Talk to Children about Sexual Abuse?

Sex education is a compulsory part of British education, but what about education on child sexual abuse? DESIblitz explores.

93% of child sexual abuse is carried out by a family member or friend of the family.

Talking about sex is a tricky task for anyone. Nobody wants to have that conversation, let alone with a child.

But as cases of child sexual abuse emerge daily, many are thinking it’s time to overcome the awkwardness and talk to children about the divisive issue.

According to a BBC report, police recorded 47,008 sexual offences against children in the year up to April 2015 – a 29% increase on the previous year and the highest recorded rate in a decade.

Further studies indicate that 93% of child sexual abuse is carried out by a family member or close friend of the family.

Some choose to avoid the topic of sexual abuse completely, as they feel it is impossible to speak openly about sexual abuse without explaining the concept of sex first.

“Telling children about sexual abuse would create a lot of pressure in their small mind. Sex should only be taught at 18.”

Following an NSPCC appeal, ‘PANTS,’ children can be taught how to stay safe from sexual abuse without explicitly having to mention ‘the birds and the bees’ itself.

The acronym ‘PANTS’ stands for: 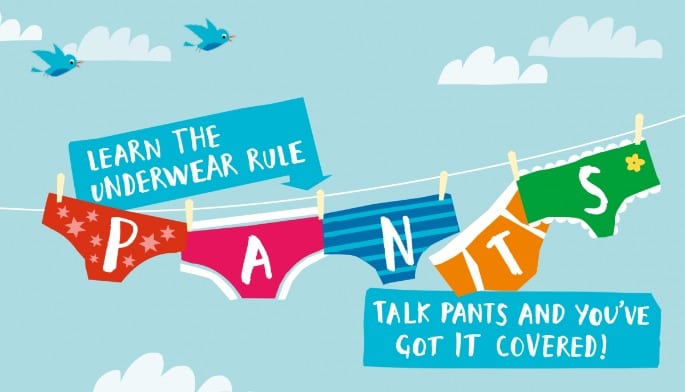 The campaign’s main aim is to ensure that children are aware of right and wrong, as well as combating the ‘shame’ element if someone was to touch them inappropriately.

Hafsa mentions a Pakistani friend who adopted a similar approach to NSPCC’s campaign:

“My friend told her daughter, ‘if someone touches you, you must stop them immediately.’

“Like on your lips, back or private areas – tell me.”

“She didn’t tell them how or why she just made them aware that if something is wrong they must say it.

“They should know what’s inappropriate and what should be avoided.

“For me personally – I will watch over them and tell them if something is wrong then they should come to me.”

Sexual abuse is already the world’s most under-reported form of abuse, even more so within minority ethnic backgrounds.

According to a study carried out by the Child Exploitation and Online Protection Centre in 2011, of the 2,083 victims of child sexual exploitation, 61% of the victims were white, 3% were Asian, 1% were black and ethnicity was unknown in 33% of cases.

Children from minority ethnic backgrounds are likely to be under-represented in statistics because of barriers to reporting and accessing services.

Research from Dr Harrison, senior lecturer in Law at the University of Hull and Professor Gill, criminologist at the University of Roehampton identified a number of factors within British South Asian communities that lead to under-representation of sexual abuse. These include:

One of the practitioners interviewed as part of the research said:

“They think it’s not going to be just the family they have to deal with but the whole community, and they’ll feel repercussions from [that].

“A lot of times…the male doesn’t take on any blame or any responsibility for their actions. It’s always the female who is blamed for whatever happens.”

This comes after a sexual abuse scandal was exposed in Punjab. Several children had shown signs that they had been sexually abused by the father or someone known to the child.

Even in conservative India, where a child is sexually abused every fifteen minutes, efforts to speak up and eradicate the stigma are also underway.

Satyamev Jayate, a TV show focusing on stigmatised issues in India boldly confronted the topic of child sexual abuse in its second episode back in 2012.

In the program, host and Bollywood superstar Amir Khan spoke to children about their ‘safe’ zones and ‘danger’ areas, assuring that the under 10’s were aware that certain body parts (chest, crotch and buttocks) were not to be touched by anyone.

“We are trying to get the children acquainted with acting out the problem. They can act, they can laugh about it, but ultimately this is the way to tell them that this kind of behaviour if it happens to you in real life is wrong.”

The activist – who was sexually abused by a trusted family member at the age of four – has also launched a petition, demanding compulsory personal safety education in India. She writes:

“Children must learn how to be safe, to identify and avoid predators.

As for when children should be taught about sexual abuse, experts have not yet pinpointed an exact age.

Executive Director of The New York Society for the Prevention of Cruelty to Children, Mary L. Pulido, says:

“My advice is that parents discuss this issue with their children as soon as they believe they can grasp the concepts.

“While this can be an uncomfortable subject, particularly if they think their child is too young.”

“Children in pre-kindergarten have shown the capability to grasp these concepts if the age-appropriate language is used.”

“Parents need to use their discretion depending on the child’s age, but the important thing is to have the conversation.”

“Children of all ages are in danger of being targeted for abuse. It’s more common as children reach the ages of 8-12, but younger children are easy prey for perpetrators, too.”

She suggests parents centre the conversation around ‘safety’ rather than ‘abuse,’ and to refer to any form of contact as ‘safe’ and ‘not safe’ touching, rather than ‘good’ and ‘bad.’

A British Asian, Aisha, expresses why it may be difficult to answer the ‘when’ aspect of the question:

“It’s a difficult one because a lot of sexual abuse happens at home as well and they may be exposed at a really young age.”

“They should be aware of the signs in primary school, from around 7 to 9 years old so we’ll understand what we’re telling them.”

“We can gauge if something is wrong. Slightly older children will understand more.”

With the topic of sex education having stirred up controversies in recent years, in light of child sexual abuse cases within both British and South Asian communities, sex abuse is no longer a subject that can be brushed under the carpet.

Whilst parents are reluctant to bring up sex with their children, educating children on safeguarding and protecting their bodies does not have to entail sex itself.

Children must be taught the fundamentals of safety and protection in order to avoid future instances of sexual abuse, whilst also eliminating the factor of shame which is also attached to abuse.

Lead Journalist and Senior Writer, Arub, is a Law with Spanish graduate, She keeps herself informed about the world around her and has no fear in expressing concern in regards to controversial issues. Her motto in life is "live and let live."
Child Abuse: Is it a Problem for British Pakistanis?
10 Social Taboos that Still Exist in India