Child Abuse: Is it a Problem for British Pakistanis?

Following the tragic murder and abuse of many children in Pakistan, we explore the issue of child abuse in the British Pakistani community.

“Hitting your kids is about power. Parents want to remind their children that they have the power."

Pakistan is notorious for its high rate of child abuse cases.

Many Pakistanis recall being ‘hit’ or ‘beaten’ by their traditional parents growing up.

However, does this apply only to Pakistanis, or is this also true for the diaspora, especially in the UK?

DESIblitz explores the overlooked issue of child abuse within the British Pakistani community.

Physical discipline has always been a staunch method of imposing control on children, especially in Pakistan.

Where parents ensure they demonstrate an upper hand and have no issue using physical violence on children if need be.

“Desis don’t talk things through – so all they can do is hit them to instil fear so they don’t make the same mistake again.”

“Hitting your kids is about power. Parents want to remind their children that they have the power.”

However, such forms of punishment are not exclusive to Pakistani communities.

Until relatively recently, physical discipline played a huge role in primary and secondary schools in Britain.

Most commonly, students were struck with a cane across their hands or buttocks, or sometimes with a plimsoll shoe.

Recent studies in the UK across all ethnicities have revealed that 41.6% of parents physically punished or “smacked” their child in the past year.

According to WHO, child abuse: “…constitutes all forms of physical and/or emotional ill-treatment, sexual abuse, neglect or negligent treatment or commercial or other exploitation, resulting in actual or potential harm to the child’s health, survival, development or dignity in the context of a relationship of responsibility, trust or power.”

Of 10 Pakistanis surveyed, 4 were regularly ‘hit’ by at least one parent

According to Dr Jon Bird, head of research and analysis at NAPAC (The National Association for People Abused in Childhood) there are numerous reasons as to why corporal punishment is normalised in Pakistani communities.

“There is so much secrecy in Asian communities so the issue is not confronted.

“The more people talk about it the less it will happen. No one talks about it; hence it happens more.”

“In some Bengali and Pakistani communities, mental health is viewed as being caused by possession. The ‘evil’ is inherent in the child so it needs to be ‘beaten’ out of them.” 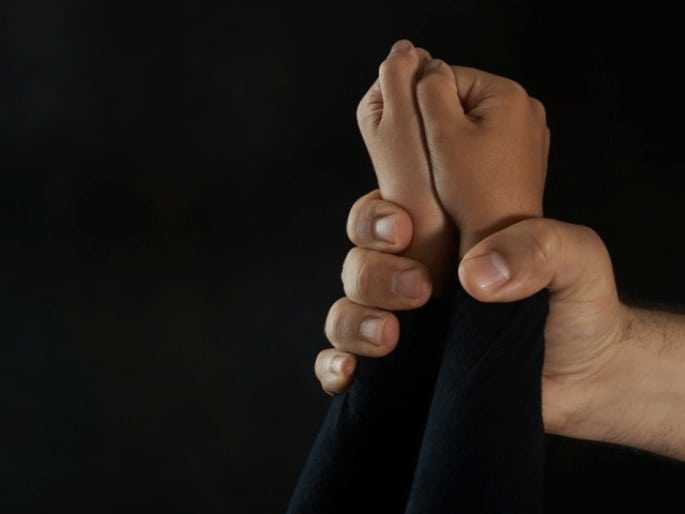 Worryingly, the concept of physical discipline of the child among the Pakistani diaspora is often mocked, which normalises the contentious issue.

“I guess it’s a coping mechanism.

“We got hit by our parents as kids, but we’re fine now.

“We’re not scarred or traumatised. We like to laugh and joke about it as we know so many others can relate.”

“If you were hit by your parent, you remembered it and you did not do or make the same mistake again.”

“It was a way of instilling discipline in us when we were young. Coming from a large family of siblings, I know this was one way our parents imposed their authority.

“To be honest, looking back, we never saw it as physical abuse or found anything wrong with it. I guess we were normalised to it.”

“I remember my dad used to smack my brothers a lot when they did silly or wrong things. But never ever hit or touched me and only shouted at me, which was enough!”

However, not all of those who were physically punished by their parents are ‘fine’ now.

“There are many effects of child abuse and the long-term effects are usually extreme anger, problems in establishing intimate relationships, flashbacks, nightmares, and feelings of frustration and hopelessness.”

In fact, following a study carried out by Harvard researchers (led by Dr Martin Teicher) on young adults who were mistreated or neglected during childhood, 25% of participants had suffered a severe form of depression at some point in their lives and 7% had been diagnosed with PTSD.

Child Abuse in the UK

The Survey for England and Wales from 2015 to 2016 showed that of the 58% of survivors who have only experienced one type of abuse, the most common type experienced was sexual assault.

Marilyn Hawes, founder and CEO of Enough Abuse UK adds to this statistic, revealing that a child sexual offence is reported and recorded every 8 minutes in the UK across cultures.

Following a survey in March 2016, White or mixed multiple ethnic groups were more likely than other ethnic groups to report any childhood abuse.

Interestingly, there are more instances of child abuse among the White population than of the Asian and Pakistani community.

Though, this is most likely due to the fact that South Asians, especially Pakistanis, are less likely to report any type of abuse due to fear of tarnishing their reputation. 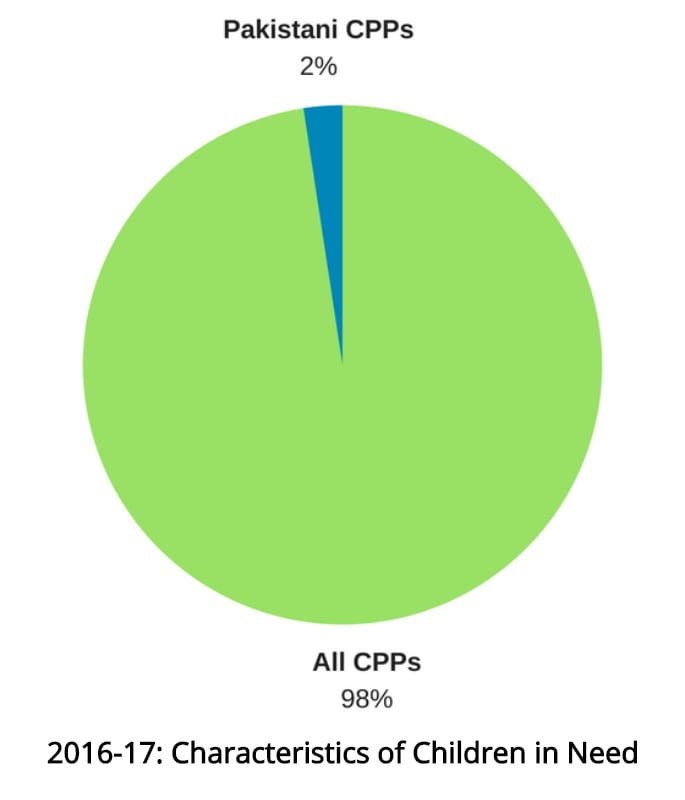 “When children are physically hit or abused, especially from the Pakistani community. They will not want to tell the truth about what took place at home. Due to the fear of their parents and repercussions if they say anything.

“It’s like they will get a beating for a beating.”

“If you were slapped or smacked by your father,  you would not for one second see it as some kind of abuse.

“It would be seen as discipline. So, telling anyone close about it would just result in people mocking you.”

“Today people encourage you to report any kind of abuse. But if you see it at home, as part of growing up. How can you report this?”

The fact that such child abuse in British Pakistani homes would not be reported means the lines get blurred as to when it is dangerous or just seen as part of the way of life.

Most recently, the Rotherham child sexual exploitation case was dubbed the “biggest child protection scandal in UK history,” in which approximately 1,500 children aged 11-16 were sexually abused.

British-Pakistani researchers have found that 84% of all people convicted since 2005 for the specific crime of gang grooming were Asian.

According to research associate at McLean Hospital and instructor in psychiatry at Harvard Medical School, Dr Alaptagin Khan, there is a possible explanation for this.

“A minority of British Pakistanis think that White girls have no moral code.

“They think they can give them comfort and then use and abuse them.

“Many Asian girls aren’t able to go out and live their lives freely, whereas a teenage White girl may be in her phase of exploration.

“They find White girls easier to prey on.”

Sexual abuse may also occur within the family – where perpetrators often exploit the fact that a young, vulnerable Pakistani girl or boy even would never reveal the abuse they are made to endure.

“Many times, these people take advantage of the fact that girls with a South Asian background will never come forward after sexual abuse and that makes them an easy prey.

“I have sat down with many child sexual abuse survivors, living in the West but of South Asian background, who said they did bring it up to their families but they still kept a cordial relationship with the abuser.

“Sometimes, it’s just teenage rebellion of girls who find themselves at crossroads between their families who live in the UK but try to believe that they can force their kids to keep their strict Asian values, and they end up in the hands of these exploiters.”

The same applies to the sexual abuse committed by those in authority.

Where cases teachers and religious leaders have also hit headlines. Young and innocent British Pakistani children at such institutes have experienced getting molested and sexually abused by those trusted by parents.

“I know of a friend who was seven years old when she was touched frequently by a teacher at Saturday school. There was no we she could say anything because the man knew her parents from back home.”

“An uncle who use to visit us from Pakistan often use to sleep in our room.

“I remember he used to put his hands around me, pretending to sleep and then touched me below. when I was little.

“If I told my parents they would not have believed me and laughed at me for making stories up.”

From 2016 to 2017, 116,500 children were placed on a Child Protection Plan, of which 2,870 were of Pakistani origin, with nearly half of these being subject to emotional abuse – making it the most commonly reported form of abuse among British Pakistanis. 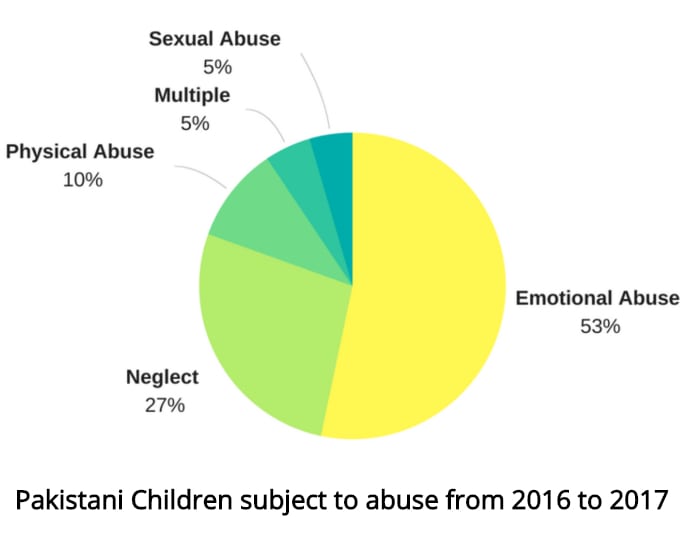 According to Health Direct, “Emotional abuse is about one person maintaining power or control over another person” often occurring in intimate relationships or between a parent and a child.

Unlike physical and sexual abuse, emotional abuse is less easy to identify and can exist in various forms.

Following a 2008 study on domestic abuse within South Asian communities, many children admitted to having heard degrading phrases from their fathers such as, “you are dead to me,” “you have shamed me” and “I never want to see you again.”

British Pakistani, Ridwana,* opens up about her personal experiences with emotional abuse.

“I wasn’t really allowed to go out much and began to get pressured into marriage by my mum.

“My opinion didn’t matter – what mattered to her was what the community thought of me.

“She then told me that my dad getting ill was my fault – claiming that me being unmarried placed too much pressure on him, making him sick.”

So, is child abuse a problem for British Pakistanis? Yes. Undoubtedly.

Many Pakistanis coming to Britain carry with them the strict rules that were imposed on them throughout their childhood – without understanding the long-term damage it can have on the child.

Though some British Pakistanis evolve in their parenting values, a significant number stick by what they were brought up with.

As Dr Alaptagin Khan previously mentioned, this is because “that’s all they know.”

Respecting elders and family honour are granted utmost importance in many Pakistani families – often more than the happiness of their child.

If you are affected by any of the themes in this article, please contact the following:

* Names changed for anonymity. Statistics on CPP's courtesy of Children In Need

Why Proving Marital Rape in India will be a Challenge
When is it Right to Talk to Children about Sexual Abuse?