Nemrah Ahmad has called out Pakistani TV dramas for its portrayal of male leads, saying it is “toxic hero culture”.

"in the end, he is just glorified as a lover."

The industry may slowly be evolving but it still portrays abusive relationships and toxic male leads.

She stated: “A wealthy and handsome playboy keeps pursuing a middle-class girl.

“He kidnaps her, stalks her, abuses her, he shouts at her, physically assaults her but he is still the hero.

“In the end, the hero wins over the girl. That is where these dramas end. Love wins. They call it Ishq.”

Nemrah went on to say that these “toxic abusive partners become Zahir Jaffar”, referring to the man accused of raping and beheading his girlfriend Noor Mukadam after she refused his marriage proposal.

She claimed that this was portrayed in Deewangi and Ishq Hai, both of which star Danish Taimoor.

The writer added that the “actor could have thought twice before accepting” these roles.

On Aye Musht-E-Khaak, Nemrah stated that Feroze Khan plays one of the most toxic characters but is glorified as a lover.

Nemrah Ahmad added: “He only plays one kind of role and in the end, he is just glorified as a lover.

“He needs to be responsible enough to choose roles wisely.”

“Now this new kid in this silly telefilm Ruposh. He literally pulls the heroine with her hair. Yes, he did. And they showed it on national television. Yet he is a hero.”

“If you have to show these characters, show them as villains.

“Teach girls how to come out of such relationships. Educate people about narcissistic behaviours.”

“Tell girls that it is NOT okay to settle for such a man.

“But do not misguide a whole generation who consumes TV shows on a daily basis, please.” 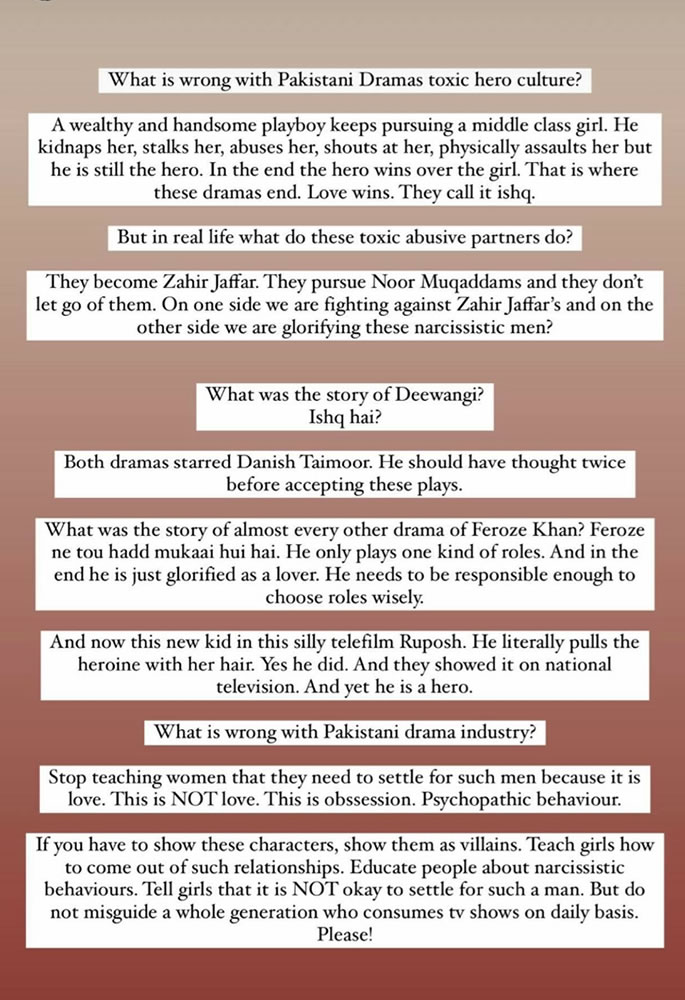 Nemrah Ahmad’s criticism of toxic male characters in Pakistani TV shows attracted a lot of attention and she also said:

“Shameless media promoting violent and obsessed heroes, who run after a girl and do not understand that no means no.

“These heroes are physically abusing in dramas (every other show of Feroze Khan) and the audience is applauding.

“This is how Bollywood has raised a generation.

“Present violent heroes, make girls believe that a man who consistently runs after them is a loving man and ger applause.

“This is dangerous. Toxic. A man who runs after you even when you’ve said no is a red flag. Never settle for that man.

“Grow up, Pakistani media. Grow up.”

Dhiren is a journalism graduate with a passion for gaming, watching films and sports. He also enjoys cooking from time to time. His motto is to “Live life one day at a time.”
Ahan Shetty to Marry Tania Shroff in 2022?
Shark Tank’s Vineeta Singh reveals Struggle of Raising a Child