Alysha Brilla, a Juno-nominated jazz singer, has organised a topless rally in Ontario, after being stopped by the police for cycling without her top.

“It was really well-attended and the people who came were very supportive.”

Indo-Tanzanian-Canadian singer, Alysha Brilla, has organised a rally in Ontario to advocate women’s right to be topless in Canada.

The jazz singer and her sisters, Tameera and Nadia, were stopped by the police on July 24, 2015 for cycling without shirts in Kitchener.

A male police officer asked them to cover up to comply with the law, but they told him it has been legal for women to be topless publicly in Ontario since 1996.

As Alysha started recording their conversation on her phone, he changed his stance and said he stopped to check if their bikes had proper bells and lights for safety.

The sisters took to the streets on August 2, 2015 to raise awareness for the issue in a peaceful ‘Bare With Us’ protest. 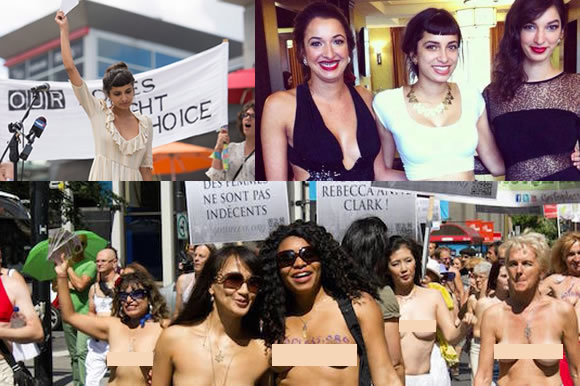 Around 300 protestors joined in – some were topless, some marched in a bra and others were fully clothed.

They carried slogans through the streets of Waterloo that read: “They are boobs not bombs, chill out.”

Another one read: “They feed you, they breed you, but they sure as hell don’t need you.”

Alysha said: “It was really well-attended and the people who came were very supportive.

“I had no idea how polarizing the issue would be. I thought people wouldn’t be so disturbed by the female breast.

“We just want to advocate and let people know that they do have this right.”

Love the posters at #barewithus! “Cover up your misogyny: breasts are not offensive!!” Such an empowering afternoon! pic.twitter.com/bRLQNx4Go0

In 1991, 19-year-old Gwen Jacobs was charged with committing an indecent act, after removing her top in public. She did so having seen a group of men doing the same.

In 1996, the Ontario Court of Appeal stated there was ‘nothing degrading or dehumanizing’ of her act.

The court overturned her conviction and passed a new legislation allowing women the same right.

Alysha and her sisters have reportedly filed a formal complaint with the police.

Images courtesy of CBC and 570 News