In a bizarre case, an Indian wife from Mumbai halted the busy traffic when she caught her husband and his girlfriend together.

the woman is then seen climbing onto the bonnet

An Indian wife caused chaos in Mumbai when she brought the busy traffic to a halt after she caught her husband with his girlfriend.

The incident happened on Peddar Road in South Mumbai on the evening of Saturday, July 18, 2020.

Locals witnessed the woman openly screaming and hitting her husband in front of traffic officers.

Traffic officers issued a warning to the woman for abandoning her vehicle in the middle of the road, which resulted in the traffic jam.

However, police said that no criminal offence was registered.

According to police, the woman chased after her husband’s Range Rover on the busy road after seeing a female passenger, believed to be his lover.

The woman suspected that her husband was having an affair so she confronted him on the road.

She stopped her car in the middle lane, got out and stood in front of his vehicle. The woman is seen screaming at her husband as he sits in his car. 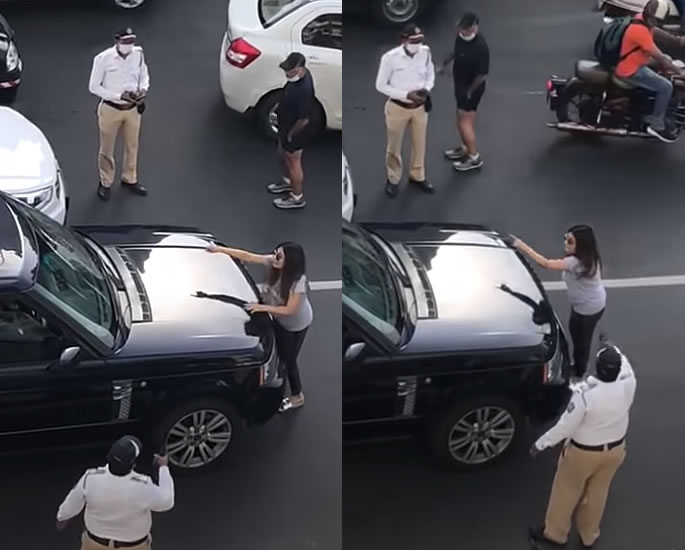 The woman yelled at her husband to get out of the car before she made her way over to the window. She then started to pull the window, which was slightly open before returning to the front of the Range Rover.

Shockingly, the woman is then seen climbing onto the bonnet and hurling insults at the alleged girlfriend. She then takes her sandal off and begins to hit the windscreen where the girlfriend is sitting.

Traffic officers try to calm her down but the Indian wife continues to shout and scream.

As she tried to open the driver-side door, her husband drives off but the woman continues to chase after him.

It was reported that when the car later stopped at a traffic signal, the wife opened the passenger door and began assaulting the lover.

When her husband got out to intervene, his wife began kicking him.

Traffic police at the scene soon intervened and all three involved people were taken to Gamdevi Police Station. 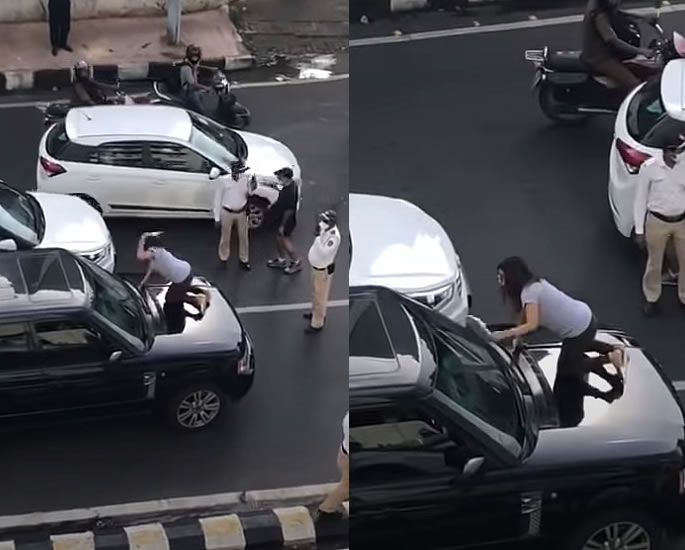 “This occurred on Saturday evening. We have issued a challan to the woman for obstruction of traffic.”

It was reported that the Indian wife was identified as Uma Aggarwal while her husband was named Nevin Aggarwal.

At the police station, Uma was issued with a warning for obstructing traffic before she was released. 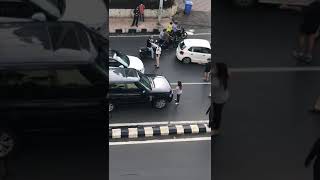 Dhiren is a journalism graduate with a passion for gaming, watching films and sports. He also enjoys cooking from time to time. His motto is to “Live life one day at a time.”
Oxford Student messaged ‘Boy’ aged 14 for Sex on Grindr
Luton Mayor seen at Party amid Surge in Covid-19 Cases