A series of anti-Semitic Facebook messages by Azeem Rafiq in 2011 have come to light. This comes after he spoke about being racially abused.

A series of Facebook messages by Azeem Rafiq featuring anti-Semitic slurs have surfaced.

This comes after he detailed the racist abuse he suffered at Yorkshire County Cricket Club as well as making allegations that racism is prevalent in cricket.

The messages are from 2011 and were part of an exchange with former Warwickshire player Ateeq Javid.

It was reported that Rafiq and Javed made the offensive remarks about Atif Sheikh, who was playing for Derbyshire at the time.

The pair had accused him of not paying a dinner bill because “he is a Jew”.

“Hahaha he is a Jew. Probs go after my 2nds again.”

The historic messages have now forced Rafiq to issue an apology.

He told the Daily Mail: “I spoke to Atif today and apologised to him for what I said.

“He was very understanding. I told I’m I was incredibly sorry as I am to all those who may have been offended.

“I spoke to Atif on the phone and he accepted my apology.”

He issued a statement on Twitter, apologising, saying he had deleted the exchange and that he is a “different person today”.

Rafiq said: “I was sent an image of this exchange from early 2011 today.

“I have gone back to check my account and it is me. I have absolutely no excuses.

“I am ashamed of this exchange and have now deleted it so as not to cause further offence.

“I was 19 at the time and I hope and believe I am a different person today.

“I am incredibly angry at myself and I apologise to the Jewish community and everyone who is rightly offended by this.” 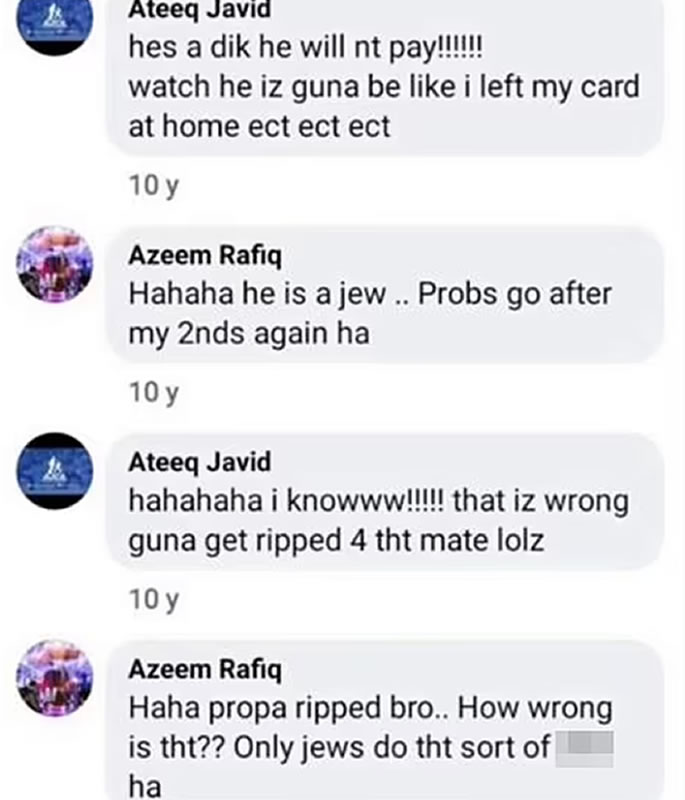 In a later post, Rafiq said: “At no point will I ever try and defend the indefensible. For those I have hurt I am sincerely sorry.

“I will continue to front up and own any more mistakes I have made.”

“Azeem Rafiq has suffered terribly at the hands of racists in cricket so he will well understand the hurt this exchange will cause to Jews who have supported him.

“His apology certainly seems heartfelt and we have no reason to believe he is not completely sincere.”

“There’s no doubt that this is massively awkward for Azeem Rafiq but he’s taken full ownership, apologised, and undoubtedly – through his own experiences – learnt a lot about racism since then.”

The revelation comes just two days after Azeem Rafiq detailed the racist abuse and harassment he experienced during his two spells with Yorkshire.

He had made allegations against the likes of Gary Ballance, Tim Bresnan and David Lloyd.

Dhiren is a journalism graduate with a passion for gaming, watching films and sports. He also enjoys cooking from time to time. His motto is to “Live life one day at a time.”
Yorkshire Teammate Pours Beer over Azeem Rafiq in Video
7 Famous Cricket Racism Cases from Around the World