A County Lines dealer has been jailed after police discovered a drugs stash hidden underneath the floorboards of his Coventry flat.

"We believe he was a one-man band"

Nadeem Alikhan, of Coventry, was sentenced to five years and nine months after police found a drugs stash hidden underneath the floorboards of his flat.

It was discovered he was a County Lines dealer who was peddling drugs across the Midlands.

The raid took place after officers received intelligence that he was sending bulk marketing messages to hundreds of contacts from a drugs hotline.

During a search of the attic apartment, officers discovered a loose floorboard under a bed.

After it was forced up, heroin and crack cocaine worth around £5,000 were found. The drugs stash was divided into wraps.

Officers also recovered a phone and SIM card that had been used to advertise drugs for sale since at least January 2020.

It was believed that Alikhan used the phone and SIM card to conduct deals collectively worth at least £63,000.

Detectives from the West Midlands Organised Crime Unit (ROCU) analysed mobile phones and text messages linked to the County Line, which was known as the CJ Line.

Alikhan admitted possession of crack cocaine and heroin with intent to supply. 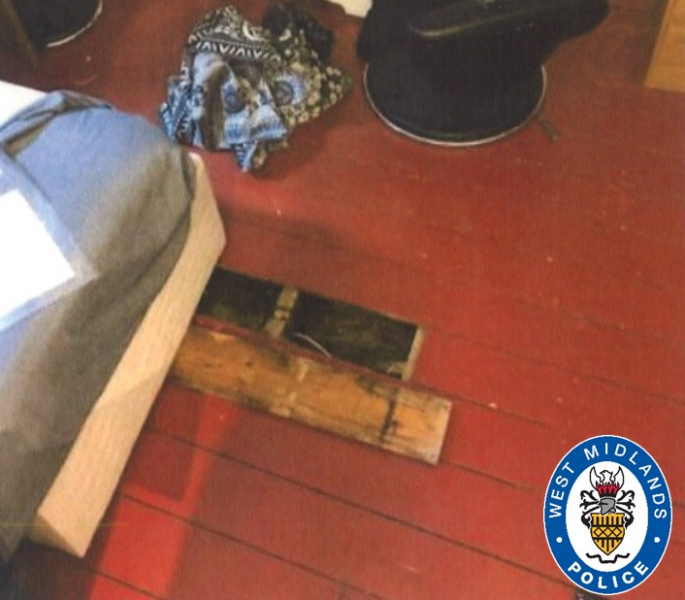 “We believe he was a one-man band, he owned the line, ran it and conducted the deals.

“The quantity of drugs we found under the floorboards was just a snapshot of his supply.

“Having analysed all the evidence we estimate he dealt at least 630g of cocaine and heroin between January and June last year.

“This investigation was triggered by community intelligence.”

“We always take information we receive from the public seriously and will act to target drug dealers and people linked to organised crime.”

On March 10, 2021, Alikhan was sentenced to five years and nine months at Leamington Justice Centre.

County Lines is where drugs are transported from one area to another.

In a previous case, a Birmingham gang was jailed for a total of 36 years after they flooded the streets of Staffordshire with heroin and crack cocaine.

Detectives targeted properties in order to arrest the Birmingham gang.

They also linked the recovered evidence, from mobile phones to CCTV images.

The County Lines drug operations saw the Class A drugs transported from Birmingham into Burton upon Trent.

Dhiren is a journalism graduate with a passion for gaming, watching films and sports. He also enjoys cooking from time to time. His motto is to “Live life one day at a time.”
Oxford Graduate sues Parents for Lifelong Maintenance Grant
Fake Uber Driver in Brisbane Sexually Assaulted 5 Women