Amir Khan posted a picture of himself on Jumeirah Beach, Dubai. However, he was trolled for apparently gaining weight.

"Your gut is saying donner kebab."

Amir Khan was on the receiving end of trolling after he posted a picture on Instagram.

The former boxer is currently enjoying his time in Dubai and gave his fans a glimpse of what he has been up to.

In addition to showing off his lavish cars, Amir also posted a picture of himself relaxing on Jumeirah Beach.

The 35-year-old wore sunglasses and swimming trunks as he took a dip in the sea. The candid shot showed him walking out of the water.

Amir captioned the post: “Believe in yourself, listen to your gut, and do what you love.”

Some of his fans loved the picture and took to the comments.

One wrote: “So handsome and sexy.”

Another said: “You look great.”

However, many decided to troll Amir Khan, with a lot of netizens claiming he had gained weight.

One person wrote: “Not listening to that gut.”

Another commented: “Lol, definitely listening to your gut there my bro.”

A third said: “Your gut is saying donner kebab.”

A comment read: “Don’t let yourself go even if you stopped fighting man.”

Mocking his apparent weight gain, some joked that Amir, who fought at light-welterweight and welterweight for most of his career, would make a boxing comeback at a significantly heavier weight class. 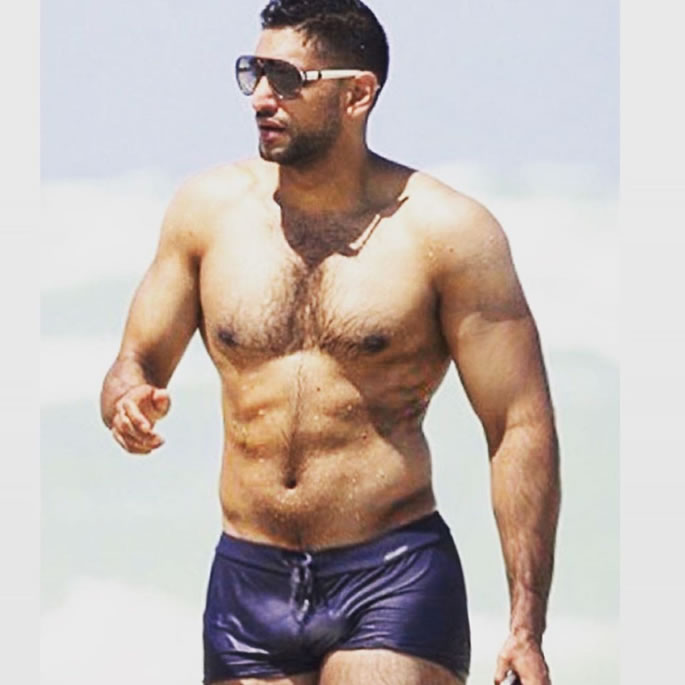 One troll brutally said: “Keep listening to your gut and you’re eventually gonna become a heavyweight.”

One hater stated Amir would become like Prince Naseem, who gained a lot of weight after he retired from boxing.

But it was not just the weight gain claims trolls were making. Others made fun of Amir Khan’s shorts, pointing out how small they were.

One person said: “Believe in yourself but you can wear a little bigger shorts.”

Another user said: “Put some clothes on first.”

“Are you and your Mrs in competition with each other?? (Who can strip off the most?)”

One claimed that the picture had been photoshopped to enhance some of Amir’s body parts.

“He’s not just photoshopped his arms but his balls too.”

But some came to Amir’s defence, calling out the trolls for making such hateful comments.

One said: “Everyone sounds so tough over the screen… Bet you all wouldn’t have the balls to say half this s**t to his face.”

Another person said: “Funny how most of the negative comments in here are from people who have never done anything with their lives, init?”

A third wrote: “The hate comments on here are disgusting. People need to start showing you respect!”

Dhiren is a journalism graduate with a passion for gaming, watching films and sports. He also enjoys cooking from time to time. His motto is to “Live life one day at a time.”
Shocking Moment Armed Police surround Knifeman
Indian Gang ran Fake Police Station from Hotel