Ameesha Patel has made her comeback with new film Shortcut Romeo in which she plays an anti-hero. DESIblitz caught up with her for some exclusive gupshup.

"My role was very challenging and I wouldn't call myself the heroine of the film.”

For the first time in her career, Ameesha Patel steps into a negative villainous role. The film also stars Neil Nitin Mukesh in the title role and Puja Gupta as his love interest.

Shortcut Romeo is a remake of the director’s own Tamil film, Thiruttu Payale (2006), which was a commercial success and became the third highest grossing Tamil film of 2006. The film was screened at the Cannes Film Festival on May 22, which was attended by the crème de la crème of the film industry. 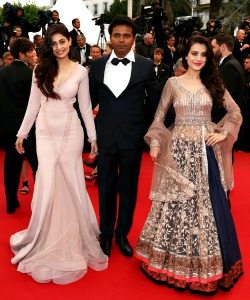 Ameesha Patel began her career after joining Satyadev Dubey’s theatre, where she acted in numerous plays, including an Urdu language play titled Neelam (1999).

At the same time she entered into modeling, appearing in several commercial campaigns. Patel has also modeled for well-known Indian brands and is a Bharatnatyam dancer.

Ameesha graced the Cannes Film Festival for the first time in an elegant Manish Malhotra coral lehenga, and was accompanied by actress Puja Gupta and director Susi Ganeshan.

The film is already creating a buzz in Bollywood as fans are excited to see Ameesha in a negative role for the first time, as well as Neil Nitin Mukesh’s new look and Puja Gupta’s role.

After making her debut with the blockbuster Kaho Naa… Pyar Hai (2000), and earning critical praise and a Filmfare Award in Gadar: Ek Prem Katha (2001), Ameesha became known to the industry as a rising star.

Her career fell during 2003 and 2006, with a number of films being unsuccessful at the box office, however her career picked up again after Bhool Bhulaiya (2007), Thoda Pyar Thoda Magic (2008) and Honeymoon Travels Pvt. Ltd (2007).

Now, Ameesha is back with a challenging character in Shortcut Romeo. The bubbly actress will be showing her dark side and bringing out her inner demons, a task which proved to be demanding and tiring for the star.

Ameesha confessed that portraying a negative role was something which was much more mentally and physically tiring for her. She claimed she was left exhausted coming home everyday as her character used to soak up all her energy.

“Ameesha’s character is very interesting. She is the anti-hero in the film. She is the negative lead and she has done complete justice to the role.” 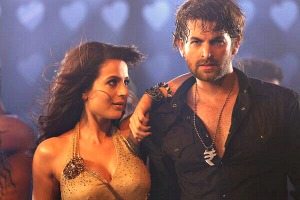 Ameesha agrees and states: “This film has two heroes – Neil and me. My role was very challenging and I wouldn’t call myself the heroine of the film.”

Since this is her comeback film, Ameesha is more than ready to take on new roles again: “Yes, it’s a great feeling after a long break and I’m all charged up and I feel as if I’m making my debut all over again.”

Neil Nitin Mukesh plays a tapori character, Suraj, who wants to get rich quick. To get the right look the director felt the need to get rid of Neil’s classy, smart style.

Susi suggested trying a wig, and then Neil decided to grow his own hair instead and develop an aggressive body language in order to fit the character.

Commenting on Neil’s look, Susi says: ‘‘We wanted Neil to have a tapori look. His long hair gives us that. His character not only demands tapori but a rich man, for that also this long hair will help.” 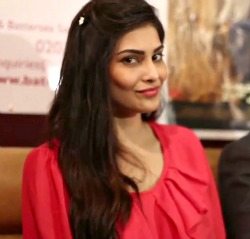 According to Susi, Neil was more than happy to change up his style. Susi says: “It wasn’t difficult because when he saw my original film, he loved the long hair look. I wanted to do this because Neil has never tried this look on him.”

When Ameesha saw his new style, she expressed: “When I saw him in the tapori look I was completely impressed as he was carrying it really well.”

The film is also, for the most part, set against the beautiful and unexplored backdrop of Kenya which adds a completely different texture and ambiance to the film.

Himesh Reshammiya has composed the soundtrack of the film and the lyrics have been created by Sameer, Shabbir Ahmed, Manoj Yadav and Sanjay Masoom.

The film is expected to do well at the box office, as Ameesha revealed that this is a great blend of betrayal, emotions, blackmailing and love and is perfect for all audiences across the globe! Shortcut Romeo is on general release from June 21, 2013.

Meera grew up surrounded with desi culture, music, and Bollywood. She’s a classical dancer and mehndi artist who loves everything connected with the Indian film and television industry and the British Asian scene. Her life motto is “do what makes you happy."
Lakeer Ka Fakeer ~ Review
Shortcut Romeo ~ Review