The teaser for ‘Adipurush’ was released, however, it has failed to impress netizens, with many trolling the poor CGI and VFX quality.

"Is this a joke? It is totally disappointing."

The first teaser of Adipurush was released and viewers are not happy with it.

The film is based on the epic Ramayana and is directed by Om Raut.

He aims his arrows to take a few out when viewers get the first glimpse at Saif’s role with ice-blue eyes, praying at a mountain. We also see him showing off his 10 heads to a woman sitting at his feet.

He rides a demon bat-like creature into battle and on the other side, Lord Ram is joined by his own army that includes Laxman and Hanuman.

There is a brief glimpse at Kriti’s Sita as she swings into a meadow with Ram smiling at her. This is followed by a battle.

There was a lot of hype but the teaser’s release has left a lot to be desired.

Much of the criticism is directed toward the heavy use of CGI and VFX, with many saying that it takes away the character’s emotions.

There is a lot of CGI and VFX but lots of viewers have pointed out its poor quality.

This led to a wave of trolling on social media.

Poking fun at Saif riding a bat-like creature, one netizen referenced Game of Thrones spin-off series House Of The Dragon.

Another asked: “Is this a joke? It is totally disappointing.”

Many also described the CGI as “cartoonish” and “Desi Temple Run.”

Others stated that the teaser was an insult to the 1987 TV series Ramayan.

This movie is an insult to Ramayan
Firstly why are Ravan and Hanuman not wearing Mukut?
What kind of hair cut is Saif given?he’s looking like Khilji
Ravan was one of d wisest Bramhin can't see his Janva
Pls stop hurting our sentiments #DisappointingAdipurish #AadiPurush pic.twitter.com/W3TiLgKhch

One said: “I request Om Raut to take one more year and redo the whole VFX thing. Nobody will watch this crap.

“If possible, change Saif and take some other actor as Ravana. He doesn’t look like a Sri Lankan demon from any angle. Looks like a Mughul. How can Sita be taller than Ravana?”

Some believed Bollywood was to blame.

“Problem isn’t in Prabhas but in Bollywood who again failed to do justice to our culture.”

“Tbh this epic was meant to be made in Tollywood under Rajamouli sir. Meanwhile, Ramcharan’s look from #RRR still gives me goosebumps!”

Although Adipurush is one of the most expensive Indian films ever made, one person believed that more money is needed to make such stories worthwhile.

“I was wrong about Adipurush, we can’t do justice to stories like Ramayana and Mahabharata unless we have a budget of 1000+ crores.

“Adipurush looks promising but I am disappointed with the VFX and CGI. Instead of Prabhas’ hefty fees, makers could have invested that money in VFX.”

The disappointment among viewers was so severe that ‘Disappointing Adipurush’ started trending on Twitter.

“Every role and every character comes with its own challenges, but portraying a character like this comes with tremendous responsibility and pride.

“I am very excited to portray this character from our epic, especially the way Om has designed it. I am sure the youth of our country will shower all their love on our film.” 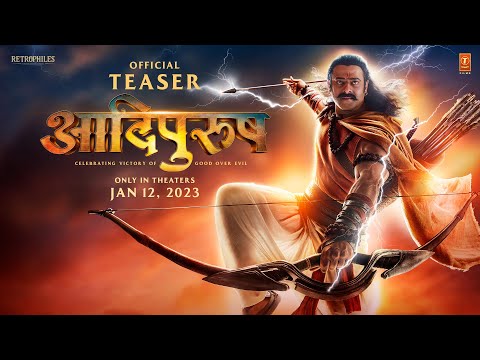 Dhiren is a journalism graduate with a passion for gaming, watching films and sports. He also enjoys cooking from time to time. His motto is to “Live life one day at a time.”
Bigg Boss 16’s Sumbul Touqeer Khan didn’t want to be on Show?
Sona Mohapatra hits out at Sajid Khan joining Bigg Boss 16