10 Snowman Photos that Blow Your Mind

From a snow-octopus to real-life Olaf and a Bat-Snowman, take a look at the most creative snowmen and sculptures people have made from around the world.

Snoopy in snow is so simple yet so creative

With the winter season upon us, the only good thing about cold weather is the snow.

As much as we would love to stay warm inside by the fireplace drinking a hot chocolate, there is nothing more fun than snow angels, snowball fights and building snowmen.

Disney’s Frozen may be a few years old now, but everyone is still asking: “Do you want to build a snowman?”

But it’s not just for kids! Everyone, wherever you live, loves to build a snowman. And these top ten snowmen have taken it to another level.

This snowman doing a handstand is absolutely perfect right down to (or up to) his woolly socks.

Yoga Company, Sadyak Yoga in Texas, have proved anyone can do yoga.

Think they have found their mascot!

It seems not all snowmen need to necessarily be made from snow.

How pretty does this light-up snowman look?

Adding fairy-lights in the snowman makes it look so magical at night!

Wow! It may not be a traditional looking snowman but this is impressive.

With a total of 500 hours, 150 tonnes of snow, 18-foot-tall and 35-foot-wide, Octnation have created the snow sculpture, Octavius.

The snow-octopus is incredibly detailed right down to its eight tentacles.

Frozen has become the quintessential soundtrack to snow days. American actress and mum of two, Beverly Mitchell, treated her kids during snowy weather by recreating the lovable snow character  Olaf!

And it looks huge! Her time and effort paid off as her kids loved it.

It seems acting is not the only talent she has. Ever thought of taking up sculpturing Bev?

Snoopy was made for being recreated in snow.

This snow sculpture of the beloved character sleeping on a snow rock is super cute.

Snoopy in snow is so simple yet so creative. And his personality shines through with his droopy eyes and floppy ears.

Photojournalist, Francisco Kjolseth, has a hilarious take on building a snowman.

His creative eye presents a fallen snowman who looks like it’s been stabbed by a lamppost.

Dark, yet extremely imaginative, we are hugely impressed by this poor snowman’s shocked impression 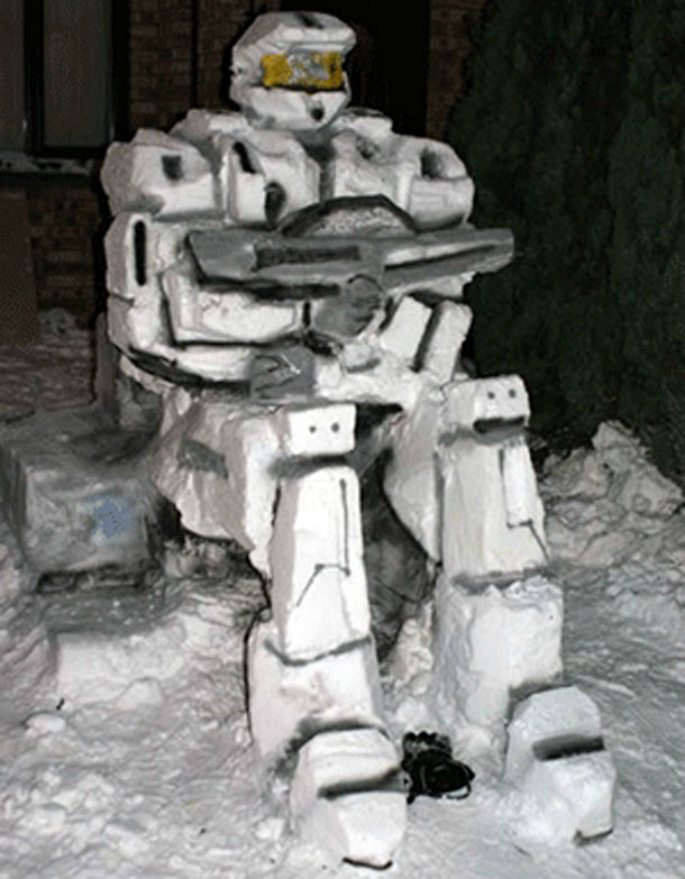 Even avid video gamers can’t get enough of snow.

This incredible giant sculpture is inspired by the popular game and sees an incredible etched robot shooter complete with a yellow visor.

Another snow animal, but this time in the form for a bunny rabbit.

Trailblazertravels posts a cute bunny that is made of snow climbing up a tree.

It seems to also be hunting season as someone comments to watch out for the snow plough.

Bootmobile spotted these snow yetis out in Toronto.

The mini yetis have a menacing stance complete with red baseball caps.

Bagginz313 shows how hilarious and easy it is to create Batman in snow.

It actually looks more like Lego’s version of Batman, who in fact is getting his own movie in 2017!

So look out of more Bat-Snowmen!

Which did you think was the most impressive snowman? Did they give you the inspiration to build something else?

With people getting even more creative, what will we see next, a snow mermaid?

Henna is an English literature graduate and lover of TV, film and tea! She enjoys writing scripts and novels and travelling. Her motto is: "All your dreams can come true if you have the courage to pursue them."
How Truck Art is Influencing Design and Fashion
7 Indian Poems you Must Read