Can Indian flavours really find favour with chocolate? DESIblitz explores the rise of chocolate in Indian cuisine, and how you can easily incorporate this tasty treat into your own home cooking.

Your beloved Indian khana and the chocolate you so crave don’t need to stay separate.

If you call yourself a foodie, ‘chilli chocolate’ shouldn’t shock. After all, you can pick up Lindt’s version anywhere and everywhere, and the combination was enjoyed by the Mayan civilisation centuries before the Portuguese explorer Vasco De Gama introduced India to the chilli in 1498.

Since that date, the chilli pepper has become wildly popular across the Indian subcontinent; but chocolate? Not so much. Where cocoa has curried favour, the preferred taste profile is largely influenced by the taste for traditional mithai – think the creamy, sweet qualities of Cadbury Dairy Milk. 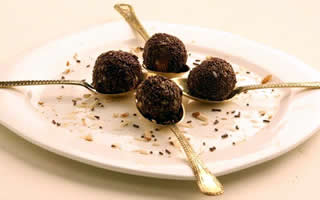 But the Indian appetite for chocolate is on the increase. High-cocoa premium wares from India’s increasing number of artisan chocolatiers are replacing mithai for many; seen as slightly healthier.

There’s also a healthy appetite for innovation, giving rise to some delicious and surprising items.

Surprisingly, not all the choc concoctions are sweet. In Indian cuisine, use of cocoa in savoury preparations is distinctly uncommon. But Mexico’s famous mole is not so far removed from a curry gravy; the complex spicy sauce gaining both depth and earthiness from a bit of bitter chocolate.

‘Chocolate curries’ are mostly ‘Brindian’ inventions. High-street supermarket Iceland even sells a frozen choc chicken curry. In his cookbook Indian Superfood, Gurpareet Bains features his version of the same dish, inspired by a restaurant proprietor at in Yardley Wood, Birmingham.

Bains claims that cocoa adds antioxidants aplenty, and is well-known as an aphrodisiac. Perhaps that’s why Mr Ginda’s in Glasgow launched its very own choc curry for Valentine’s Day. The king prawn ‘Nakodari’ comes served with a chocolate and strawberry naan. 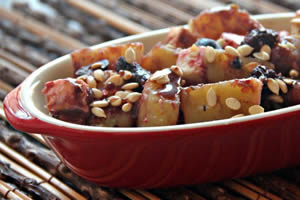 Mr Ginda’s curry is actually an Indian invention – a generations-old family recipe perfected in the Punjab. But ‘Atiya’s Chocolate Special’ was born in Britain and is served in Scunthorpe. The dish combines chicken tikka masala – the original ‘Brindian’ curry – with 60g of Cadbury Dairy Milk.

‘Currymania’ is a common condition in Britain, so it would seem logical that sweet treats like Cocomaya’s ‘Mumbai Curry’ chocolate bar would be gobbled up with relish. 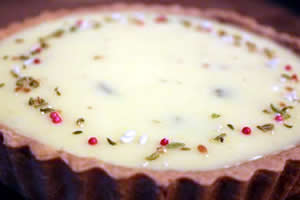 White chocolate suits all sorts of Indian spices. Carom Soho’s chef Vishnu Natarajan pairs it with cardamom in a mousse, whilst Roopa Rawal of Devnaa adds it to her double-chocolate kheer.

Pistachio Rose also offers spiced milk and dark choc tarts, and the brand’s nutty choc naans fly off the shelves as fast as they’re baked. Sweet Karma’s chocolate samosas sell well; as do those at Bromley’s Cinnamon Culture. It seems safe to suppose a sweet samosa is a very tasty treat.

If you’re treating yourself to a Michelin meal, check out Benares’ chocolate peanut butter tube. At Babur in South London, cumin and chocolate combine in a fondant pudding. For good pud recipes to try at home, look to The Incredible Spice Men’s choc and cardamom mousse cake, or Anjali Pathak’s cardamom-cinnamon choc torte. 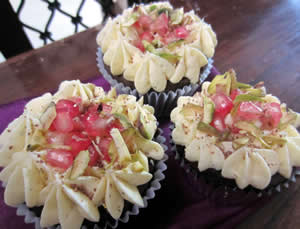 Anjali also adds cinnamon to her hot cocoa, along with ginger. ‘Cook In A Curry’ Maunika Gowardhan prefers a ginger-cardamom blend, and Anjum Anand adds ginger, cinnamon and red chilli.

At Paul A. Young’s boutiques, customers customise their hot cocoa with a selection of spices, including black cardamom.

Why not try one of food blogger Chintal Kakaya’s ‘chocolicious pomegranate and shrikhand cupcakes’ with that cup of cocoa, or dunking in a couple of Vivek Singh’s black pepper-spiced choc biscuits? Vivek even masterminded the Marmite chocolate and cardamom mousse – a real ‘love-it-or-hate-it’ recipe! Another cool treat is Leeds-based Indie Ices’ vegan chocolate-hazelnut kulfi.

These simple and very surprising chocolate truffles will get your tastebuds all a-tingle, try our exclusive recipe: 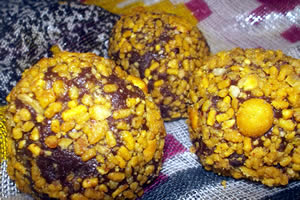 Cocoa consumption and cultivation are rising across the country. In Kerala, Swiss company Chocolat Stella works alongside The Indian Organic Farmers Producer Company Limited to grow quality, organic, Fairtrade cocoa. With a new factory in Andhra Pradesh, confectionery giant Mondelez is planning to turn out 250,000 tonnes of chocolate a year.

That’s an awful lot of choc. When there’s so much experimentation to be done, good job! Your beloved Indian khana and the chocolate you so crave don’t need to stay separate – they can combine to create something even more lip-licking. Tuck in and try; what’s the worst that can happen?

Food writer Zoe has no ties to the subcontinent beyond a deep love for its cuisine. When not eating, you’ll find her writing, talking, or reading about Indian food. Her motto? 'The food supplies the tie that the umbilical cord did not.'
Salt’n Pepper London ~ Specialists in Pakistani Cuisine
The Wonderful Benefits of Indian Mangoes