"I’m going to buy you a Rolex tomorrow mate."

Muhammed Azhar, aged 40, from Coventry, and Alexander Christopher Wood, aged 36, from North West London, have both been jailed for a total of 16 years for defrauding companies and money laundering.

Wood posed as a bank official and Azhar set up accounts to be used for the victim’s money transfers. The pair scammed three family-run business of almost £2 million.

The men were sentenced at Blackfriars Crown Court on Thursday, 12 July 2018.

Azhar was jailed for nine years after pleading guilty to eight counts of fraud and one count of money laundering.

Wood was imprisoned for seven years after he pleaded guilty to 11 counts of fraud and one count of money laundering.

Their criminal offences were against 12 companies in the United Kingdom. The companies suffered major losses with three of them nearly losing £1.8 million and one company out of them losing about £1.3 million.

The two men had actually met in prison had created an operation to target the finance departments of the companies with Wood playing the lead role in this.

He would contact the companies saying he was a senior fraud adviser at the bank they were a customer with.

Then using sophisticated methods and special software, including a spoof ‘caller ID’ program, Wood convinced company accountants that their computer systems and their network had been infected by the ‘Wannacry’ virus.

Azhar arranged ‘mule’ bank accounts for the next part of the scam.

Funds would be paid into these accounts by the victims after Wood told them that offline payments would need to be made in order for checks to be executed to locate malicious software. Telling them that he is working on a special “offline portal” for security purposes.

However, the large amounts of money sent by the victims would actually transfer in real time and not ‘offline’.

Once funds arrived into these ‘mule’ accounts, they would be withdrawn immediately.

An investigation into the two con men was launched by Met’s Cyber Crime Team after the discovery of the fraud taking place.

Azhar and Wood were located by detectives as being at an address in NW1 in London, which was where the criminal cyber attacks were being made from.

Officers then arrived at the house on Royal College Street in north-west London on Thursday, January 18, 2018. Azhar and Wood were both arrested by police.

A range of companies was targeted by the fraudsters which included an estate agency, a removals company, an architects firm, two building contractors and a demolition company. 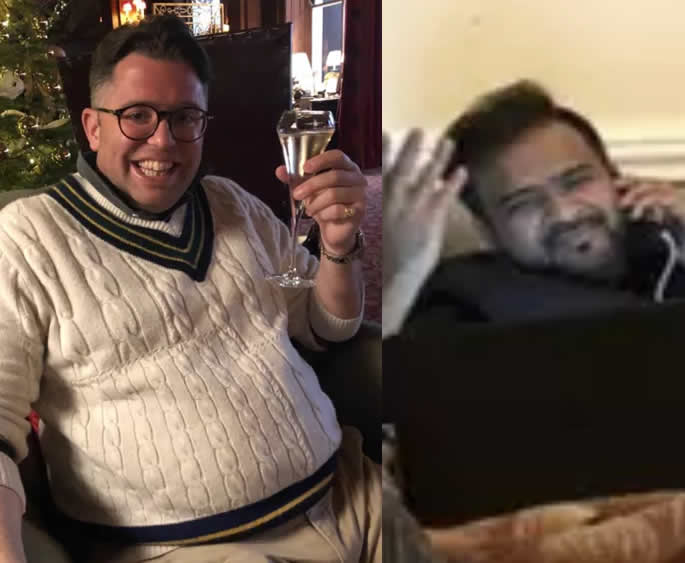 The investigation into Azhar’s phone found that he had been conducting Google searches for companies that had “&sons” in their name, revealing that they were after family-run companies.

The telephone systems of some of the companies targeted by Azhar and Wood had records of phones calls made to them.

“I’m going to buy you a Rolex tomorrow mate.”

While Wood was on hold speaking to a company for about two hours and instigating a transfer of £1.3 million to their account.

During the raid, officers did seize Rolex watches and £10,000 in cash.

“Wood and Azhar carried out a series of despicable offences which have understandably had a devastating impact on their victims.

“Whilst investigating these matters we liaised with colleagues throughout England and Police Scotland in order to bring these two individuals to justice.

“Wood and Azhar enjoyed luxury lifestyles, staying in five-star hotels, drinking champagne and being driven around in luxury cars at the expense of their victims.”

Statements made by the victims revealed the devastation of the ordeal and its impact.

“I can honestly say that the day we had our money stolen out of our accounts by being tricked into believing I was speaking to our bank was the day my world fell apart.

“I am totally distraught and feel totally conned and defrauded. I no longer trust anyone.”

“The crime really hit me hard in the following weeks and months, I felt depressed and angry.

“Since the crime, my brother has been in a downward spiral of depression that resulted in him being hospitalised.

“He has been forced to re-mortgage his house as the majority of the investment into the company was against his personal house.”

“I have now had to close down part of the business with the immediate effect of 13 people losing their jobs.

“I have been left feeling angry and upset that these individuals can just call into my business and steal money directly from myself.

“This crime has been one of the largest events to have rocked our stability since its formation.”

Detective Constable Mary-Anne Dickson who was part of the investigation team said:

“Not once has either Wood or Azhar made any comment in the many interviews which took place, nor have they shown any remorse to the victims who have lost huge sums of money.

“They are career fraudsters who are part of a larger network that we are currently closing in on. We will not rest until they are all brought to justice.”