The Indian Village with No Doors and No Crimes

There are few places as special as the Indian village of Shani Shingnapur. In this peaceful village, trust exists but crimes don’t.

None of the homes have doors, no locks, no keys

A resident of the Indian village Shani Shingnapur that has no doors shares his thoughts on the way they live.

“In Shani Shingnapur, the way we live here, there is a sense of brotherhood.”

Shani Shignapur is a village part of Maharashtra, an Indian state that possesses one of the worst crime rates in the country, 415.8 per 1,000 in 2019.

In spite of the high crime rate of Maharashtra, the homes, the temples, and the shops of Shani Shingnapur have no locks. Actually, it was the choice of the villagers not to have doors at all.

In 2011, India even introduced its first lockless bank in the village and installed “a glass entrance in the spirit of transparency and a barely visible remote-controlled electromagnetic lock in respect of the villagers’ beliefs.”

The mystery remains, as the police station (where the walls are missing doors) opened in 2015 “has not yet received a single complaint from the villagers”.

A History without Theft 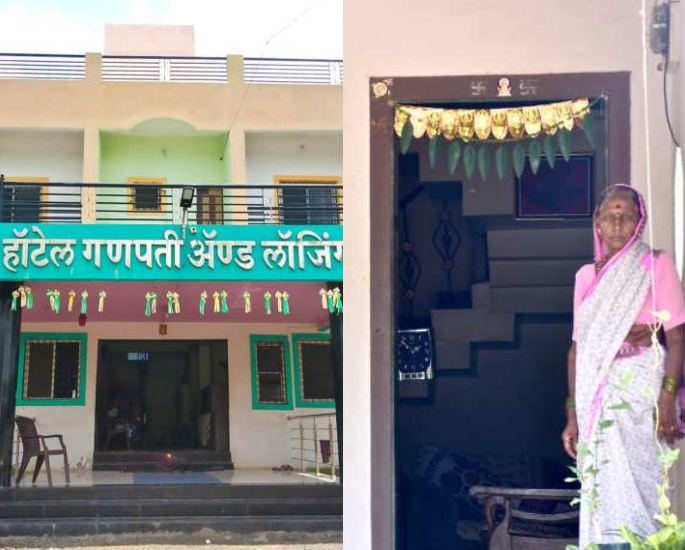 Police officer, Vaibhav Petkar, was interviewed by the Great Big Story. He explained that it was the faith of the villagers that actually protected them, and always will as long as they believed.

Their story is a puzzling, captivating one.

In fact, he told the researchers:

“I have worked in different cities and rural areas. So, to me, nowhere in the world, in India, or Maharashtra, is there a place this special.

“For the last 400-500 years, there has been no theft. And the villagers have a staunch faith that there will be no theft in this village, and that faith has held its ground.

“Whether this system works or stops, it all depends on the people.”

But if it will ever stop, it will not be soon. In fact, there are around 45,000 visitors on “Amavasya, the no moon day, believed to be the most auspicious day to appease Shani”.

In addition, since 2016, the centurial restriction for women’s entry into the inner sanctum has been erased:

“The Shani Shignapur trust finally allowed the women devotees to enter the sanctum.”

In this way, the village’s tradition absorbs the attention of many. Thousands of people visit the village of Shani Shignapur every year. This strengthens the belief and the faith of the villagers.

As a matter of fact, Shani Shignapur has followed this intriguing, legendary tradition for over four centuries, because the village-headman of the time was said to have been blessed by Lord Shani.

Shani is related to the planet of Saturn, and he is considered to be “the god of karma, justice, and retribution in the Hindu religion, and delivers results to all, depending upon their thoughts, speech, and deeds.

Depending on karma, Lord Shani is therefore capable of “delivering misfortune and loss to those who deserve it” or “conferring boons and blessings to the worthy”.

This is because he is considered a great teacher, who “punishes those who follow the path evil and betrayal” but can reward the “righteous acts”.

Shani’s appearance shows him to be dark. Tales of him say that he “was born dark”, because of his mother, who “was immersed in great penance”.

“the lord of justice isn’t really cruel, he just lives up to his name.

“He believes in serving justice and presents people with the fruit of their actions”.

Therefore, “Shani Dev’s presence can turn the lives around”.

Legends speak that onto the coast of Panasnala River, was found a “black slab of rock”, which was most likely carried there by inundations during a period of alluvion.

However, after the human touch of a shepherd, a miracle took place, as the slab bled.

It was in that mysterious way that in the dream of the shepherd, appeared Shani, who was told he would now inhabit the village and demanded the black slab to be kept there as well.

But the rock had to be left in the open air, not hidden away, because “there is no need for a roof, as the whole sky is his roof”.

In this way, the deity could use “its colossal powers” to “oversee the village without hindrance”.

And as such, after being blessed by the hand of a god, the leader was promised that the village would be protected from any danger.

“The shrine for Shani consists of a five and a half feet high black rock installed on an open-air platform, which symbolizes the god Shani.”

Therefore, the villagers felt no need to hide their belongings behind closed doors. It was time for them to trust their deity and believe in its promise – the promise that they would always be protected. 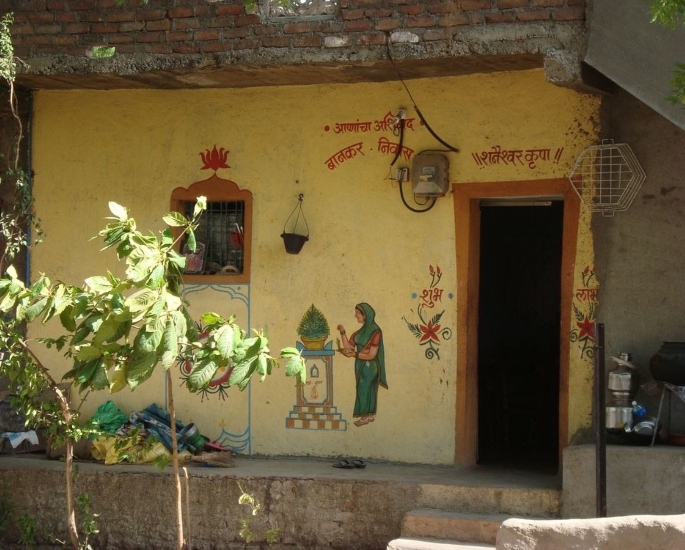 Doors were removed, they didn’t need them anymore. Money, gold, jewellery –anything that had any value at all – didn’t need any protection.

Public toilets had curtains for the privacy of women, the houses were left unguarded, the police station had no door itself and the bank was divided from the outside by a thin transparent layer.

“There is no dispute amongst people,” said a villager. “There are no murders or crimes here. None of the homes have doors, no locks, no keys.”

“Everybody lives together here, with their hearts connected.”

“Sometimes, even if I go out of town for a month, I just shut the shop with a wooden plank. Relying on that wooden plank and my devotion to Lord Shani.

“If you are a true pious devotee of Lord Shani, build a house anywhere, do not put a door on it – Lord Shani will definitely protect you.”

It is said that the protection is real, as according to the villagers:

“thieves will immediately be punished with blindness, and anyone dishonest will face seven-and-a-half years of bad luck.

“In fact, local lore says that when one villager installed wooden panes at the entrance of his house, he had a car accident the very next day.”

“Our privileged situation is because of Lord Shani. Today, our current generation has the same devotion to Lord Shani as our ancestors did.”

However, he had to question:

“But how long will this [devotion] last?”

But no answers were available – and in fact “only time will tell.”

It is an enchanting mystery that may or may not be true, but its significance cannot be disputed. 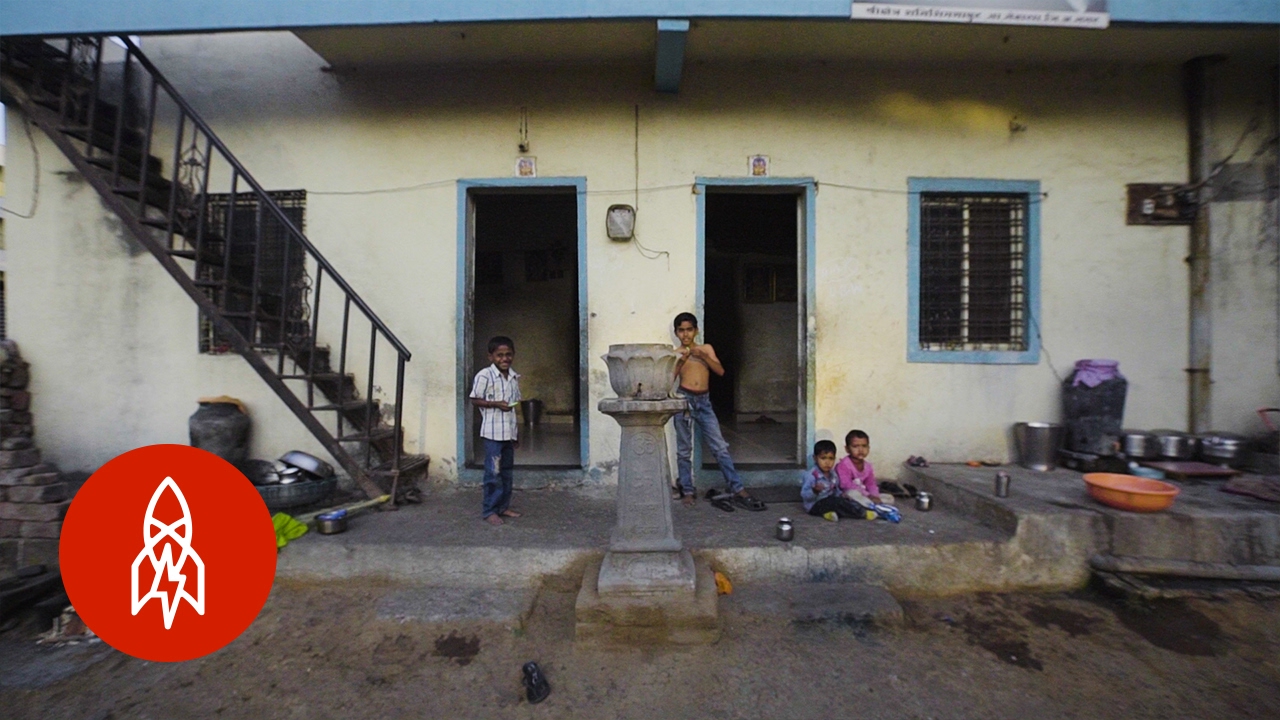 Whether it is their belief that shields their homes from harm, or simply their mutual trust, it cannot be certain.

However, what can be said about this unique place, is that no matter how far away from here it is. It may be hidden between mountains and covered by immense trees, but it exists.

Shani Shignapur is alive and everyone around the world can learn an important lesson from this little village.

It may not be in regards to faith and belief, but there is significant trust between people.

Living without doors may be inconceivable. But that’s because in most places, anywhere around this world, there are people “whose minds are corrupted by fear and doubt” – of each other.

In the comments of the interviews, a person wrote:

“This makes me smile so much. It makes me so happy that people can link their hearts together and become one.”

Shani Shingnapur gives the clear message of a united people one that others around the globe can learn from.

It is truly beautiful to see a small, hidden village, attempting to reach the peacefulness dreamt by the whole world.