Desi desserts are completely sumptuous when it comes to sweets. Here are the most popular ones known for their textures and tastes.

There are many variants of dishes depending on the region of the country they are made in. We look at five dishes amongst the many choices which are very popular amongst Desi communities around the world.

These dishes have stood the test of time and have evolved even into gourmet cuisines today, cooked by top chefs, who experiment with the originals to create new versions.

They are served in most South Asian restaurants and if not, are naturally easy to make at home using recipes that have been passed down within families as a tradition. 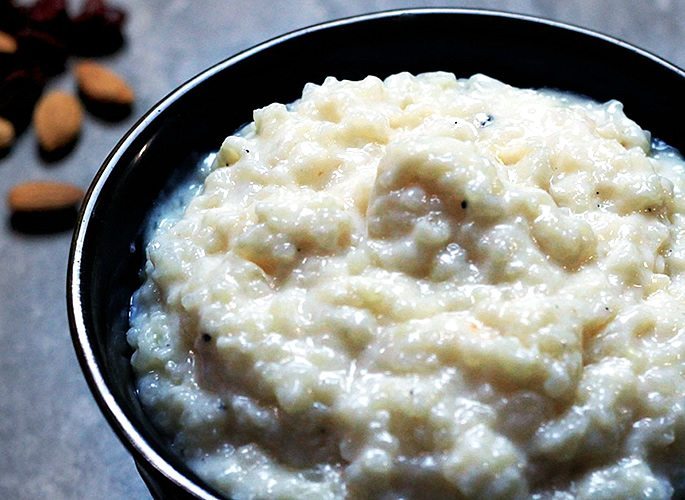 Kheer is one of the most popular and simple desserts enjoyed by South Asians for centuries. The dish is rice pudding and is also known as Khiri, Payasam, Payasa or Payesh.

The word Kheer iscommonly used in North India and Pakistan, especially Punjab and is actually is derived from Sanskrit words Ksheeram, which means milk.

It is often prepared during celebrations and religious festivals and is simply made by using milk, rice, ghee or butter and sugar.

Cream is added in some recipes to enhance the richness of the taste and it is often garnished using almonds, cashews, raisins and pistachios.

Sometimes “Gur” is used instead of sugar depending on the South Asian region where it is made.

One of the origins of Kheer go back to the Oriya version of Kheer (Khiri) which was prepared in the city of Puri in the Jagannatha Temple kitchen, in Orissa, India, about 2,000 years ago. It is cooked to this day in the same way within the temple precincts there.

Kheer is an important part of a traditional South Indian meal. The South Indian “Payasam” also makes extensive use of jaggery (Gur) and coconut milk instead of sugar and milk.

Rice was introduced to Europe by the Romans as early as the 8th or 10th century AD. Therefore, it”s possible that the recipe for the popular English rice pudding has descended from Kheer.

A typical serving of Kheer in a bowl contains about 437 calories and 8g of fat. 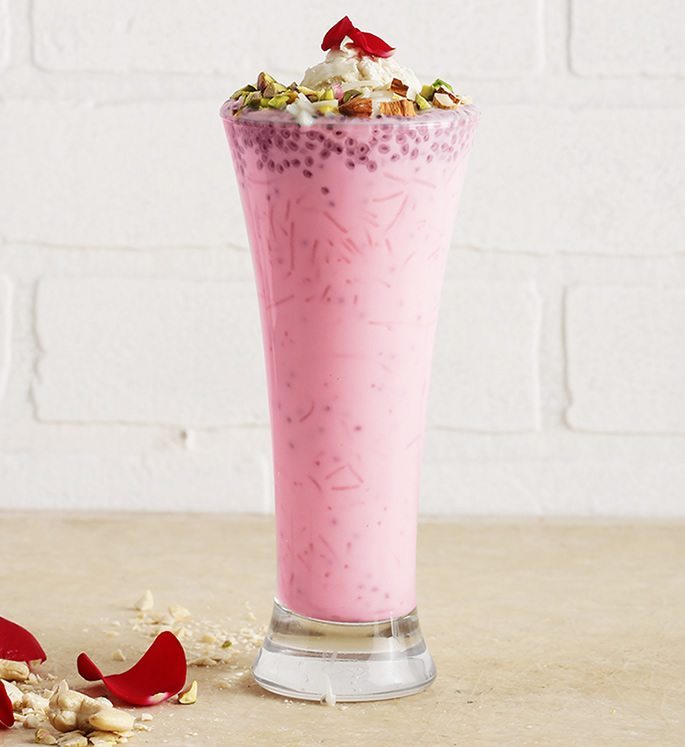 This dessert has progressively become popular in places like the UK. Falooda or Faluda is served cold and is the nearest resemblance to a Western sundae dessert served in tall glasses at diners.

Historically, Falooda originates from Persia. There is a Persian dessert which is of non-liquid form, called faloodeh, which was brought to India during the Mughal era.

The original Persian dish consisted of homemade noodles mixed into ice and vermicelli made from arrowroot. The dish evolved in India, where the vermicelli was then made from durum wheat.

The most common version comes from Pakistan and North India, where it is made with sweet basil leaves, boiled vermicelli, tapioca pearls, rose syrup, ice cream (kulfi) and milk.

In the south coast of the Bangladesh, Falooda is made with Ketaki extract, pistachios, tapioca pearls, creamed coconut and mango as well as milk, vermicelli and may even include strong black tea to make quite a distinct flavour.

The dessert is also very popular in Afghanistan, Sri Lanka, Bangladesh, Myanmar and the Middle East. The rose syrup can be substituted with another flavoured base to produce a saffron, mango, chocolate or fig flavour. The ice cream used can vary too with flavours such as pistachio and mango.

It is readily available in South Asian restaurants and can be bought as a mix-kit at Asian supermarkets.

One typical serving of Falooda contains about 390 calories and 18 grams of fat. This does depend on the size of the glass and portions served. 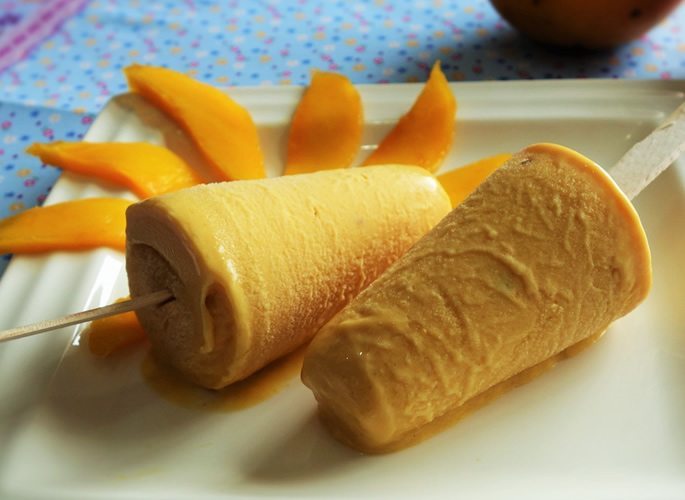 Once the delicacy only available to Indian aristocrats and introduced by Nur Jahan, the wife of Mughal Emperor Jahangir in the early 1600″s, Kulfi as a dessert has come a long way and lasted into the modern age as a popular Asian sweet treat.

Although it looks and tastes like ice-cream as in the West, it is not whipped like ice cream and is much thicker and creamier in texture. It is akin to frozen desserts and does take longer than ice cream to melt when consuming.

One of the most wonderful things about Kulfi is the taste and the variety of flavours it comes in.

The moulds can be purpose-made small containers or thin sticks to mould and freeze the kulfi mixture around the sticks like an ice lolly. Kulfi can be found in most Asian supermarkets.

One serving of Kulfi on a stick contains about 209 calories and 12 grams of Fat. 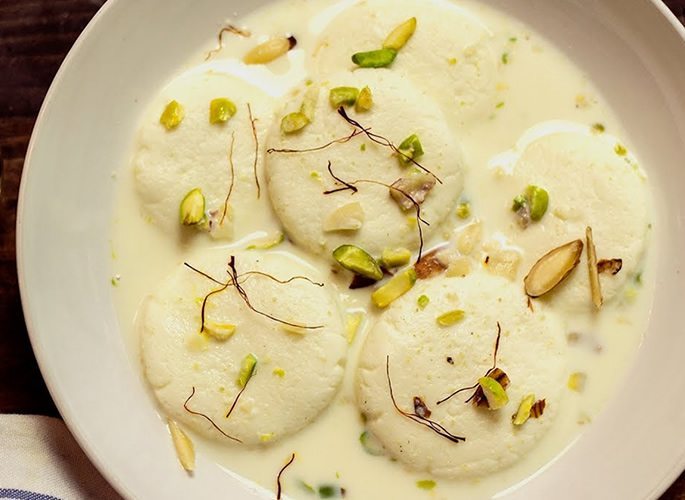 One of the most loved desserts from South Asia is Ras Malai. Its popularity stems from India, Pakistan, Sri Lanka and Bangladesh and is served frequently during festivities and weddings.

Historically, Ras Malai is to have originated in the state of Orissa, Bengal, in Eastern India. It is truly delectable Indian dessert from the state of Bengal.

The dish contains soft, spongy and yellow coloured dumplings made from paneer (cottage cheese) which are soaked in syrup and then drenched in sweetened and thickened milk (malai).

Preparing the dish can take quite a few hours, especially the process of thickening milk and making paneer. The dessert is chilled in the refrigerator for always served cold.

One serving can contain about 225 calories and 11 grams of fat. Since it has significant milk content, it is quite high in calcium and protein. 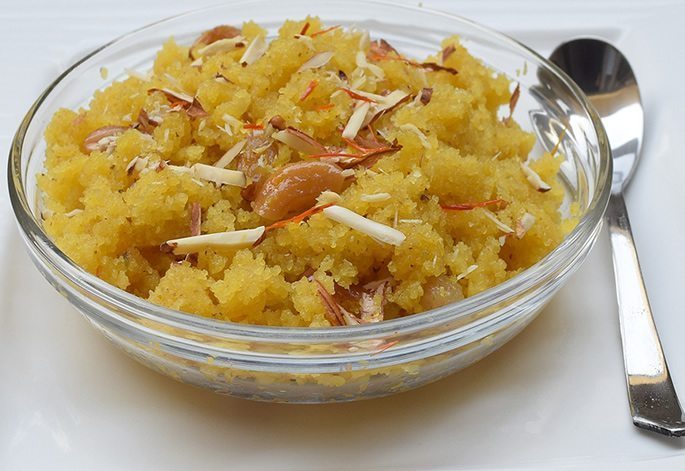 Variations of the Halwa (or Halva) dish are popular in many countries around the world including India, Pakistan, Bangladesh, Sri Lanka, Lebanon, Iran, Syria, Iraq, Jordan, Libya, Israel, Tunisia, Turkey and Somalia.

Sooji Halwa is commonly made in Pakistan, Afghanisation, India, Nepal, Iran and Bangladesh.

The dessert is made with the key ingredient which is semolina (sooji) and has sugar or honey, butter (ghee) or vegetable oil added to it as the base.

Then, raisins, dates, other dried fruits, or nuts such as almonds or walnuts are often added to Sooji Halwa. The texture of the dish is smooth and rich and is similar to polenta.

It is frequently cooked in the home. Ingredients for a typical recipe are two parts semolina, one part butter (or vegetable oil), two parts sugar (or honey) and four parts water.

The semolina is mixed with the fat and sautéed.

The syrup is made from the water which is heated and sugar.

The two are mixed and additional ingredients like nuts and dried fruit are added at this point.

If the Sooji Halwa is liked beige, soft and fluffy it can then be served as is, otherwise, it can be cooked further to make it firmer and a darker brown colour.

This dish is very high in calories and fat. One serving bowl of Sooji Halwa has about 700 calories and 40 grams of fat.

These five examples of popular Desi desserts consumed by South Asian communities around the world.

There are many other endless South Asian sweet dishes made for enjoyment when it comes to those with a love for sumptuous desserts. If you are in a cooking mood, why not have a go at making Kheer or Sooji Halwa, as they are the easiest to make out of five!

Madhu is a foodie at heart. Being a vegetarian she loves to discover new and old dishes that are healthy and above all tasty! Her motto is George Bernard Shaw's quote 'There is no love sincerer than the love of food.'
Guide to Popular Herbs
Atul Kochhar ~ A Culinary Genius