Marvel’s Vice President has suggested in an interview that the company’s recent focus on diverse heroes has been hurting their comic book sales.

There has been a 40% drop in sales among Marvel's most popular characters since 2014.

Marvel’s Vice President of sales and market, David Gabriel, has suggested that the company’s recent focus on diversity has hurt sales. He made the comments in an interview with ICv2 on 31st March 2017.

No doubt this will surprise many, but David Gabriel claims it’s not just Marvel that think this.

Supposedly, comic book retailers have told Marvel the reality behind the sales of their diverse ideas.

Significantly, Marvel’s Vice President said: “I don’t know that that’s really true, but that’s what we saw in the sales.”

Gabriel has since clarified these statements, promising a continued commitment to Marvel’s new, diverse heroes.

Yet, the statements have provoked a discussion over the role of Marvel’s emphasis on diversity in their recent sales slump.

In the last few years, the company has introduced a new wave of younger heroes. The most recent example has been Riri Williams, a black teenager who has become the new Iron Man, renamed as Iron Heart. Others include the female Thor, and the Muslim Ms Marvel, Kamala Khan. 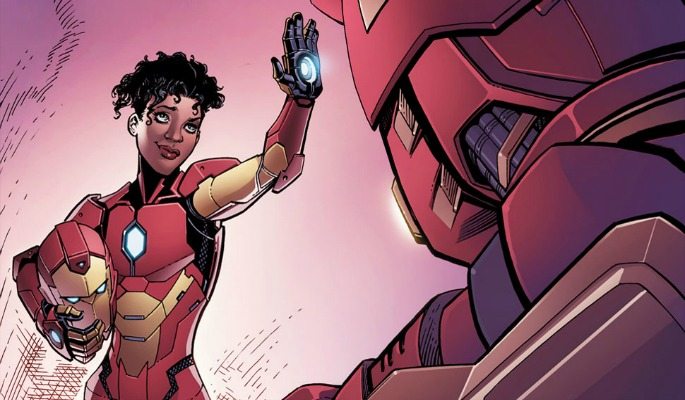 These new characters have coincided with a fall in sales since the end of 2014’s “Secret Wars” event. Comic Book Resources has reported a 40% drop in the sales of some of Marvel’s most popular characters since “Secret Wars.”

The success of DC Comics’ recent “Rebirth” relaunch has perhaps only made diversity roles in the sales slump clearer. DC’s relaunch saw a return to the status quo for many of the company’s most popular heroes. In the year since there has been a significant increase in sales for the company.

However, there has been some dispute as to how central diversity has been to Marvel’s recent sales slump. Many fans have taken to Twitter to offer a variety of other reasons for the company’s recent struggles.

Speaking to DESIblitz, a fan of the comics has pinned the blame on the lacklustre storytelling of late. He said:

“Diversity doesn’t have much to do with it.

“It’s the general storytelling that is to blame. Civil War 2 [a recent event in the comics] was forced and unoriginal. And Marvel’s insistence on pushing the Inhumans to the forefront in place of the X-Men has been frustrating. The writing just hasn’t been what it used to be.”

What impact Gabriel’s statements will create on the company’s strategy moving forward, remains to be seen.

Are People Oversharing on Facebook Too Much?
BAFTA Games Awards 2017 Winners and Highlights