A father and son advertised cars on eBay, luring unsuspecting buyers. However, they ended being the victims of terrifying robberies.

"It is hard to imagine a more terrifying event"

A father and son were part of a gang that lured unsuspecting car buyers on eBay into terrifying robberies.

Mohammed Fareed, aged 47, and his son Faisal Farid, aged 25, both of Oldham, were jailed for more than 30 years.

Victims from across the UK travelled to Oldham and Manchester to buy cars that had been advertised on eBay, often at cut-price deals.

Police identified a total of 14 robberies or attempted robberies between September 2019 and February 2020.

Some victims were attacked with hammers and machetes, while others had a gun pointed at them.

In one case in Gorton, a mother was with her two-year-old child when she travelled with £15,000 from Dundee.

Masked, armed men tried to get in their taxi and rob them. However, they managed to escape as the taxi sped off.

“It is hard to imagine a more terrifying event than that, where a woman and her young baby were involved.

“The participants in this robbery, whoever they were, ruthless and thought nothing for the safety of a woman and her child.”

Another victim flew to Manchester from Belfast and was met in Clayton by three masked men before being struck with a hammer and robbed of £16,000.

During an incident in Oldham, a machete-wielding robber shouted “I’m going to chop you up into pieces” before £11,000 was stolen.

Judge Dean called Fareed a “manipulative” criminal who tried to keep his distance from his crimes.

He said: “I have to say I form the view that I have not come across, to my recollection, a more manipulative man than Mohammed Fareed.

“A man well versed in trying to keep himself at arm’s length from the criminality in which he is involved.”

He added that Fareed was “pulling the strings” and that his son was acting under his direction, setting up eBay accounts to lure in victims.

Adam Marco was involved in two of the incidents and was jailed for six years. 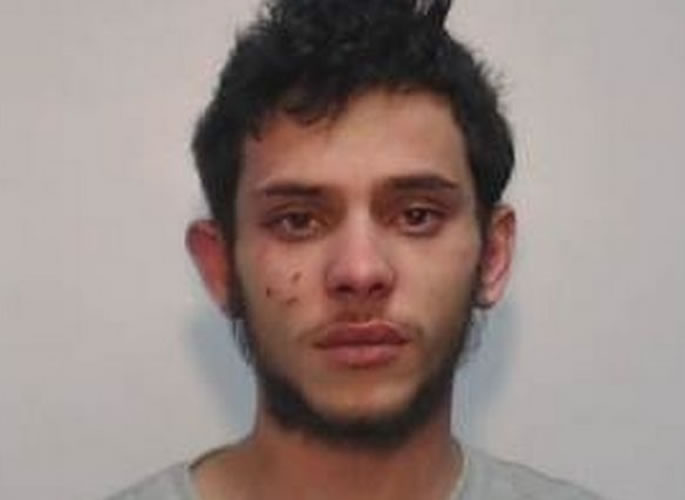 He denied wielding any weapons or injuring anyone but his DNA was found on a hammer recovered by police.

More gang members are believed to be at large.

Defending Fareed, Nicola Gatto said he “did appear to be trying to lead a law-abiding life” after being released from prison for drugs offences.

He set up a business selling massage equipment, but she said “perhaps the revenue were not aware” of it.

Stuart Duke, for Farid, said he had only one previous conviction for a “minor” public order incident when he was 18, but that he had admitted being involved in fraud.

Mr Duke said Farid had been brought up by his mother as a “decent law-abiding young man”.

“It seems that Mr Farid has been seduced by the criminal world, he now has a heavy price to pay.”

Adam Lodge, for Marco, said he was in debt and also experienced “peer pressure”. He feels “shame” and is remorseful.

Judge Dean praised the “skill” of officers who investigated the “complex” case.

The father and son were both convicted of conspiracy to rob.

Fareed was jailed for 20 years while Farid received a 12-year sentence. They will both serve two-thirds of their sentence.

Meanwhile, Marco will serve half of his sentence.

Manchester Evening News reported that a Proceeds of Crime investigation is due to take place.

Dhiren is a journalism graduate with a passion for gaming, watching films and sports. He also enjoys cooking from time to time. His motto is to “Live life one day at a time.”
Solicitor jailed for Stealing £380k Stamp Duty Payments
Indian Bride wears Panipuri ‘Jewellery’ for Wedding