Demo sets Prey as May 2017s most Exciting Game Release

With a free demo available to try, DESIblitz offers a preview into the subversive sci-fi adventure by Bethesda and Arkane Studios.

The demo grants you a first-hand experience of Prey’s terrifying alien adversaries: the Typhon.

With Prey releasing worldwide 5th May 2017, publisher Bethesda Softworks has given gamers a one hour demo of the sci-fi action-adventure game.

Available on both Xbox One and PlayStation 4, the Prey demo offers a tantalising glimpse into what looks set as one of the most exciting games out this year.

The demo opens at the start of the game, showing off the game’s subversive tone right off the bat. After choosing a male or female protagonist, players start with getting out of bed and going to work.

What follows are a series of tests at a corporation, each equally mundane. This leads to some funny moments as the observing scientists are repeatedly perplexed at your capacity to complete them.

Yet, the tests also speak to the sinister truth of your role and your job. By the time you come to your last test, it’s safe to say you’ll never look at a cup of coffee the same way again.

Without spoiling too much, the Prey demo lets players explore the starting area of the game.

Developed by Arkane Studios, the people behind the Dishonoured series, the game world is packed with things to find. There are dozens of emails to read, and plenty of everyday objects to mess around with. 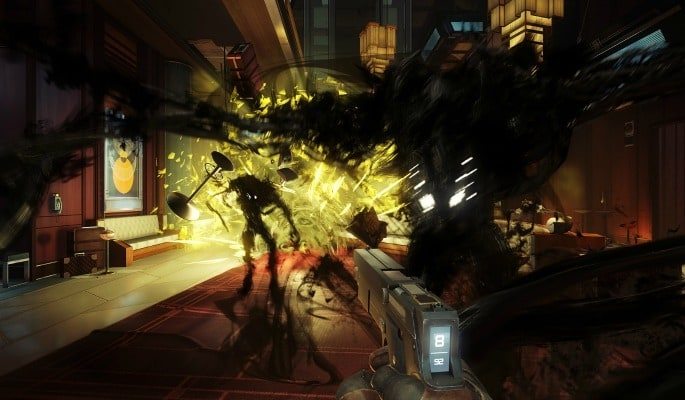 The demo also grants you a first-hand experience of Prey’s terrifying alien adversaries. Called the Typhon, some of these creatures can transform themselves into any object. Rest assured, this makes for easy paranoia.

The general habit of checking out everything you can touch in a game has a risk in Prey. You can never know if the box you’re approaching is actually a Typhon. It wouldn’t be surprising if the game later reveals your weapon to be a Typhon in disguise.

At the same time, whilst offering great gameplay, the upcoming game looks to offer a cinematic experience also.

The demo’s opening credits take place on a helicopter ride, as you look out across a near-future cityscape. This makes for a far more engaging opener than any cut-scene where your only interaction is skipping it.

During the segment, the game’s soundtrack also shines. Featuring a heavy amount of synth, the soundtrack suggests a retro, ‘80s vibe to the game, and is immediately catchy.

With tracks by the composer Mick Gordon, involved with famous soundtracks like DOOM, the full game looks likely to boast a fantastic sensory experience. You can hear a sample of the soundtrack at Bethesda’s YouTube channel here.

The highly-anticipated game will release worldwide 5th May 2017. The free demo acts as the perfect place for excited gamers to bide their time, and for those interested to give it a try.

Smart, retro, and subversive, Prey looks set to be easily the most exciting game of this season, if not the year.