Just when you thought football fever had mellowed with the end of FIFA World Cup 2014, our Bollywood stars got the Mumbai heat rising when all assembled to play a friendly football match for a good cause.

"Yes, my father is playing. He doesn't play very often, so I don't know [how well he plays]."

Sunday was not any other day on the football field of Mumbai. Superstar Aamir Khan’s daughter Ira hosted a fun celebrity football match in the Mumbai rains on 20th July 2014.

The football match saw many Bollywood celebrities like Aamir Khan with his wife Kiran Rao, Hrithik Roshan, Abhishek Bachchan, Imran Khan, Tiger Shroff, Sohail Khan, Kunal Kapoor, Dino Morea, Rahul Bose and many other film stars battling it out to show their support for a good cause! 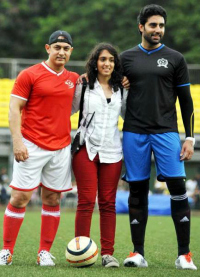 Organised by Aamir’s daughter Ira who contacted her father’s famous friends herself, the stars glistened at the fundraising event for TIGI (Trust in Goodness Inside) Foundation’s animal welfare shelter.

The match was well thought out to raise finances for Ms Nuzhat Khan’s animal shelter TIGI Foundation as the organisation wants to build a state of the art Animal Shelter on the outskirts of Mumbai. Nuzhat Khan happens to be Ira’s aunt and Imran Khan’s mother!

Before the match day, Ira Khan said: “There’s a lot of work, so it’s exciting as well as stressful. Yes, my father is playing. He doesn’t play [football] very often, so I don’t know [how well he plays]. We will see in the match.”

Ira made sure donators got their money’s worth; fans were given an opportunity to win contributor-rewards for all stages of donations.

These included an opportunity to take a selfie with their favourite stars, work-out with Imran Khan, or hangout with Aamir Khan on the sets of his new film P.K. 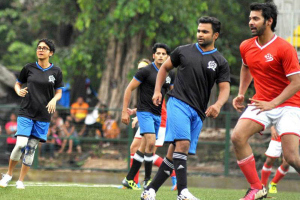 They could even be a part of the football game and play with their much-loved stars! All they had to do was make money contributions for a good cause.

“You can go for a ride in Imran [Khan] bhai’s Ferrari, or work out in his gym. Or you can spend a day with my dad on the sets of PK,” Ira said.

Aamir Khan and Abhishek Bachchan were the captains of each side. Interestingly, Kiran Rao opted to play for Abhishek’s team so that she wouldn’t have to listen to her husband Aamir’s instructions. Unfortunately she ended up on the losing side as Aamir led his team to victory.

Later Aamir said that he regretted winning, admitting to a reporter: “You’re a married man, you know you should never win against your wife. I tried so hard to lose but the team I had was too good!” 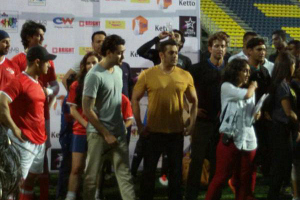 To which Salman coyly remarked: “At least now you can make it up to her!”

Salman Khan being super busy with Kick promotions didn’t have the time to attend the whole football game.

However he did make sure he was present to support the cause and also distributed prizes to all in the end. He later said: “It’s a great cause. Humans and animals should live together. They have taken a good initiative.”

Despite stars like Aamir Khan, Hrithik Roshan, Abhishek Bachchan, Salman Khan being in attendance, it was Aamir’s little boy Azad Rao Khan, who fascinated the crowd and the players on the field. 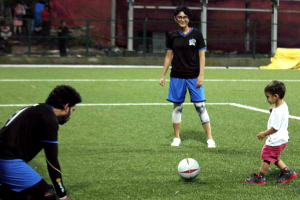 For the first time, proud parents of the adorable Azad, Aamir and Kiran let him free with a football at the event despite the paparazzi being there.

It was a delightful sight to see the kid playing with his mother Kiran Rao. Abhishek Bachchan even guarded the goal post while Azad tried to score a goal.

The proud father of Ira, Aamir Khan confessed of how happy he was with Ira’s initiative and her intentions to bring about a positive change in society:

“I just hope that she remains happy and healthy all her life and contributes positively to people’s lives and mine,” said Aamir.

It is always a proud feeling to see our favourite B-Town celebrities sweating it out for a good cause. We hope to see more of them hanging out, laughing and playing more such friendly matches in the future.

Komal is a cinéaste, who believes she was born to love films. Apart from working as assistant Director in Bollywood, she finds herself doing photography or watching Simpsons. “All I have in life is my imagination and I love it that way!”
LIFF 2014 celebrates Independent Cinema
Changing Technology in Bollywood Films