Twenty-six-year-old Anmol Chana has received a prison sentence after he murdered his mother and stepfather at their home in Oldbury.

“They had been stabbed multiple times"

Anmol Chana, aged 26, of Smethwick, has been sentenced to life in prison for murdering his mother and stepfather at their home.

Jasbir Kaur, aged 52, and her husband Rupinder Singh Bassan, aged 51, were discovered dead at their home in Moat Road, Oldbury, on February 25, 2020.

Jason Pitter QC, prosecuting, said that the police were alerted by Mrs Kaur’s daughter on February 24 because she was concerned she had not heard from her mother and stepfather since the Saturday when she left them with her brother Chana.

He said: “As things transpired the next time they were seen by anyone, apart from the defendant, was when police attended their home to the scene of utter carnage.

“Both of them had been brutally murdered, stabbed multiple times with a knife in what must have been a ferocious attack.”

The defendant’s sister Kiran tried to call her mother and stepfather on February 23 but did not make contact. At 9 pm, she visited their home and found that her stepfather’s Toyota Aygo was not there.

She also went to Chana’s address but did not find him there.

The police were later informed and they forced their way into the couple’s home where they were “met with a bloody scene” with “blood marks” leading to the two bodies in the rear living room area.

Mr Pitter said: “They had been stabbed multiple times in what can properly be described as horrendous injuries.”

When paramedics arrived in the early hours of February 25, it was clear the couple had been “dead for some time”.

A murder investigation was launched and it was revealed that Chana had taken Mr Bassan’s Toyota Aygo in an attempt to flee.

Chana had deposited hundreds of pounds at the Halifax bank in Smethwick, including cash he had stolen from his mother.

Mr Pitter added: “It is apparent he was making plans to flee the country. He purchased a plane ticket to go to Italy via Turkey. At some point, he abandoned the Toyota Aygo which was later recovered.”

Chana had unsent messages to himself on his phone as “reminders”. One was to check back on his mother’s home, another was to change currency, while one was to “buy a new knife”.

He was arrested on February 25 and the keys to the Aygo were at his home, along with his passport and travel documents.

A knife and sheath which contained the blood of the two victims were on his bed.

The investigation also determined that Chana received hospital treatment for a nasty bite on his thumb.

Kiran had been shopping with her mother on February 22. During the day, Chana had called his mother to ask to stay but Kiran was “keen to avoid him because of their history”.

Kiran returned home at 8 pm and called her mother to say she had arrived back okay.

It was heard that Chana was fascinated with knives.

He was also “capable of being violent to those close to him, in particular, his mother who it seemed he had some form of animosity towards”.

Mr Pitter revealed that Chana’s friends and family had grown increasingly concerned about his behaviour at times.

He said: “He had become more aggressive towards his mother and sister. He developed a fascination with knives so much so that knives had to be locked away from him. Police had been called on several occasions because of his behaviour.”

Chana’s mother, sister and stepfather “remained sympathetic” to him despite his deteriorating behaviour and tried to help him.

On one occasion, Chana had sent a message about his mother, saying:

“I want to knife her, pour boiling oil down her throat, pour her head into a chip pan”.

Mr Pitter added: “Tragically he did one of those things.”

Chana initially denied killing anyone but later accepted killing both of them, claiming a combination of self-defence and loss of control.

The victims suffered more than 20 knife wounds each.

Mr Pitter said: “A ferocious attack where the intention could only have been to kill. Inevitably it must have taken some time. He must have known what he was doing.

“The actions, whatever preceded them, could never be said to be within any normal bounds of behaviour. They clearly went way beyond.” 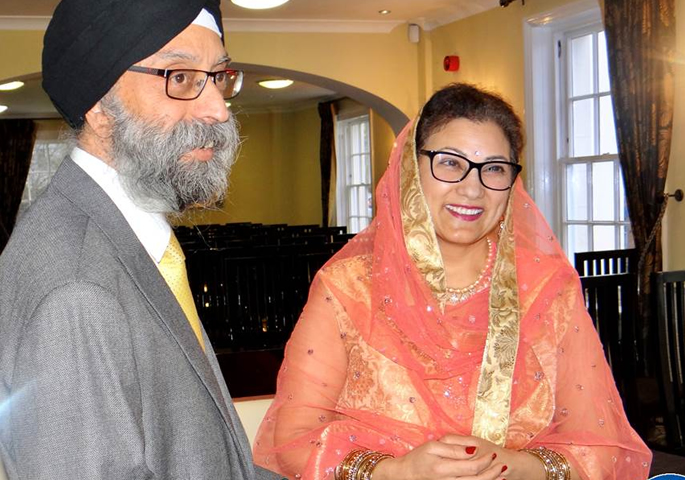 She revealed that she and her mother would sometimes lock themselves in their rooms because of Chana’s behaviour.

Following a nine-day trial, Anmol Chana was found guilty of their murders.

In a victim impact statement, Kiran stated that she did not hate her brother but hated what he had done.

She said: “I could not sleep properly without nightmares. I have been left by myself. I feel so empty without them.

“I am having to take a break from uni. It does not seem to be getting any easier.

“I had so much love to give them. Sometimes I think this has all been a terrible nightmare.

“I pity him. He is going to have to live with what he has done for the rest of his life. I miss my parents so much.”

Judge Mark Wall QC told Chana: “You had a deep-seated animosity for your mother.

“Despite your behaviour towards her she always sort to help you. Mr Bassan was nothing but kind to you.

“The allegations you made about your mother I am sure were false.

“These are allegations borne of pure fantasy. It is the clearest example of your lack or remorse I am sure you took the murder weapon to the house

“You have a long-standing obsession with knives.”

Chana was sentenced to life in prison with a minimum term of 36 years.

Dhiren is a journalism graduate with a passion for gaming, watching films and sports. He also enjoys cooking from time to time. His motto is to “Live life one day at a time.”
GCSE Student pays Tribute to Father who died on Frontline
Man jailed after Police find £5m ‘Gucci’ Cocaine Stash