Which Fathers & Sons have Played Cricket for Pakistan?

The gentleman’s game runs in several famous Pakistani families. We showcase fathers and sons who have played cricket for Pakistan.

"Qadir was even finer than Shane Warne"

Fathers and sons from various parts of Pakistan have played cricket internationally across different eras.

It is a very proud moment for a father to see their son represent Pakistan in the same sport as they once did.

These father and son duos have some similarities, whilst also bringing their own unique aspect to the game.

Members from the same family have played cricket for Pakistan either as a batsman, spin bowler, wicketkeeper, or all-rounder.

Most of the fathers and sons have donned the white jersey of Test cricket, with some playing One Day International (ODI) games as well.

Contemporary cricketers have gone on to feature in T20 Internationals initially.

DESIblitz presents several fathers and sons who have played cricket for Pakistan on a global scale. We also summarise some of their key achievements. 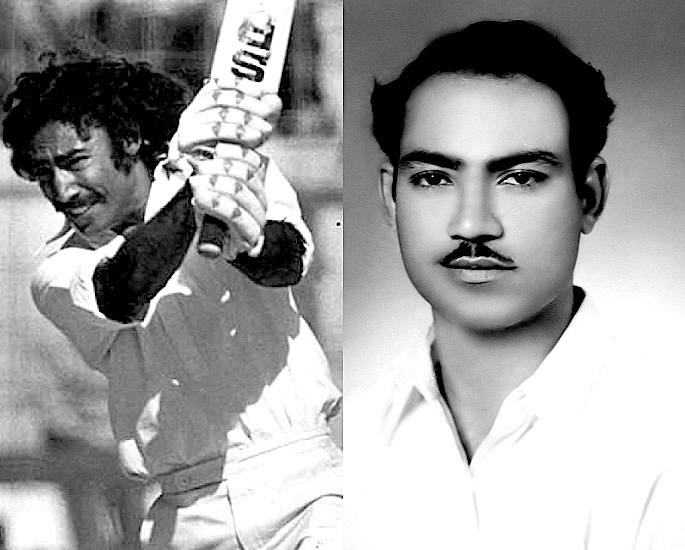 He was born in Lahore, British India (present-day Pakistan) on March 5, 1921. In only his 2nd Test, he became the first Pakistani cricket player to score a hundred in this format of the game.

Nazar’s unbeaten 124 saw him carrying his bat through in Pakistan’s first innings total of 331.

Pakistan won the game comfortably by an innings and 43 runs. Nazar sadly left this world in his birth city on July 12, 1996.

His son Mudassar Nazar also went onto represent Pakistan. Mudassar was born in Lahore on April 6, 1956.

Mudassar made his Test debut versus Australia on Christmas Eve in 1976, as a solid opener. The highlight of his career was hitting over 700 runs in the 1982/1983 home series against India.

Earlier in Test cricket, his first five-wicket haul came against England. He picked up 6-32 at Lord’s in 1982.

Three years later, he took 5-28 in ODI cricket versus Australia at Melbourne during 1985. 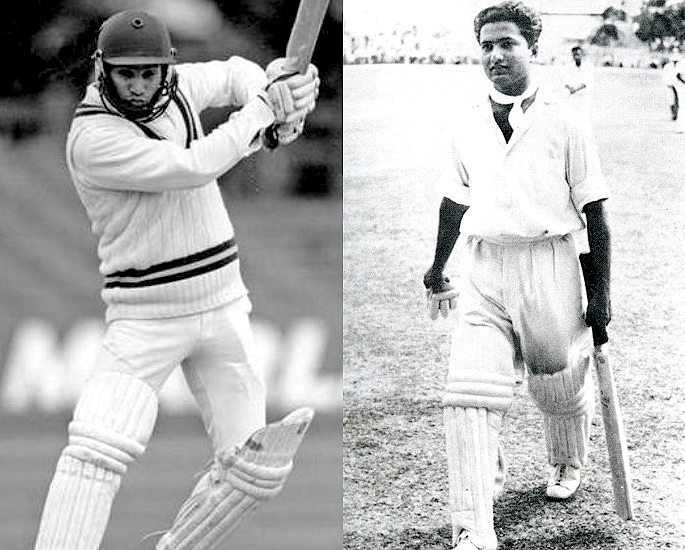 Hanif Muhammad was the first big-name batsman to have played cricket for Pakistan. Famous as the “Little Master, he was born in Junagadh, British India on December 21, 1934.

Despite defence and grafting being his forte, he was also able to attack. He was also one of the early champions of the reverse sweep.

Fans will remember his 337 against the West Indies as an opener in the second innings at Bridgetown, Guyana.

Occupying the crease for 970 minutes, with this innings Hanif, was able to salvage a draw for Pakistan.

During a fifty-five match Test career, Hanif scored twelve hundred, with an overall average of 43.98. Hanif passed away in Karachi, Sindh, Pakistan on August 11, 2016.

Shoaib Mohammed followed in the footsteps of his father, representing the Green Shirts. He was born in Karachi, on January 8, 1961.

Besides being an opener, he had other similarities to his father. This includes having a short height and being able to concentrate for long periods.

Playing mainly on the off-side as a front-foot player, his sweetest shot was the cover-drive. He had huge success against New Zealand, smashing five of his seven Test hundreds.

Even though he was not a regular ODI batsman, Shoaib scored one hundred in the shorter format.

His unbeaten 126 came up against the Kiwis at Wellington, This was the 2nd ODI of Pakistan’s 1988/89 tour of New Zealand.

Shoaib was also a good fielder, specialising in the cover region, deep leg side, and short leg.

Occasionally, he was also handy with his off-spin bowling. 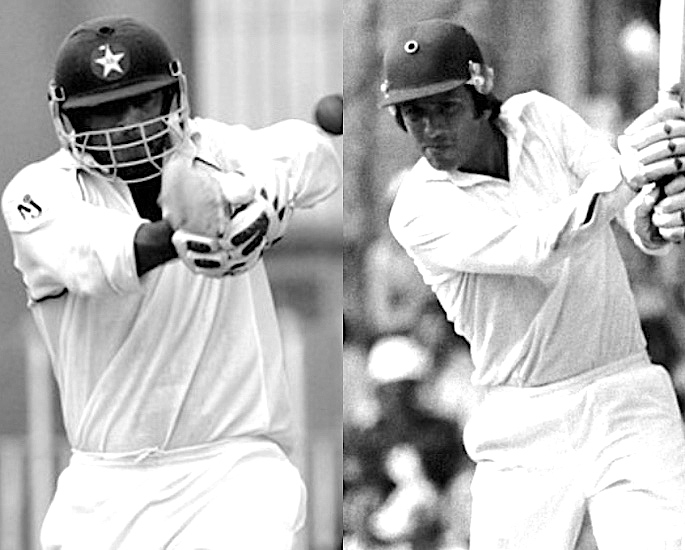 Majid Khan was an elegant opening batsman who played cricket for the Pakistan national team. He was born Majid Jehangir Khan in Ludhiana, Punjab, British India on September 28, 1946.

Majid’s attacking batting had the flair and fluency. He was often effortless with his bating approach.

He was known for smashing fast bowlers bravely without wearing headgear. Australian bowler Denis Lillee had to face the brunt of Majid’s onslaught.

He reached the magic three figures on eight occasions in Test cricket, with a top score of 167.

Majid is the only Pakistan batsman to hit a hundred before lunch on the first day of a Test match. He smashed 108 not out of 112 balls.

Majid accomplished this amazing feat during the 1976/977 Test Series versus New Zealand in Karachi.

Appearing in twenty-three ODI’s, Majid had a healthy average of 37.42. His only hundred in the limited-overs format came up when facing England at Nottingham’s Trent Bridge.

Majid also had thirteen wickets to his name in ODI cricket, with 3-27 being his best. This came against England at Leeds Headingly Stadium on June 16, 1979.

Majid was known for tying the batsmen down, with his bowling.

Bazid Khan is a former Pakistan middle-order batsman and son of Majid. He was born in Lahore, Punjab, Pakistan on March 25, 1981.

He was primarily an orthodox batsman but with a good temperament.

His Test career was next to nothing, playing only one match. However, in ODI cricket he featured in twelve games, with 66 being his highest score. 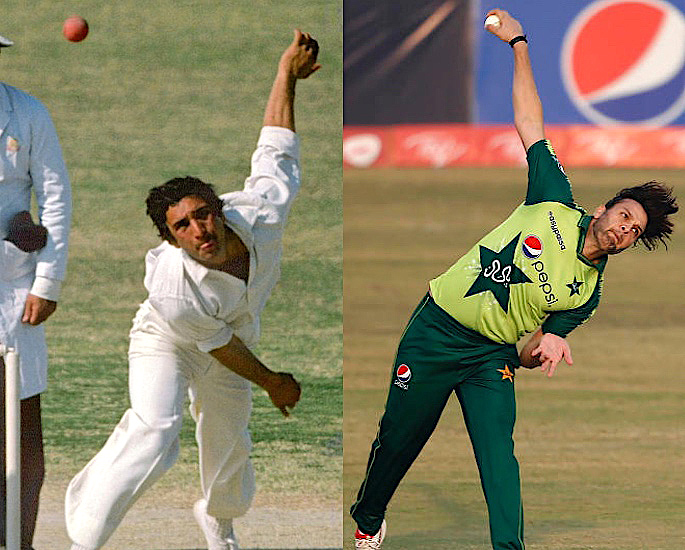 Abdul Qadir was a renowned former Pakistan leg-spinner who played cricket on an international level. He was born Abdul Qadir Khan in Lahore, Punjab on September 15, 1955.

Qadir had a big hand in the revival of leg-spin bowling during the late 70s. As a bowler, he had a lot of fire in him, with a temperament more like a fast bowler.

Qadir had a very dance-to-the-tune bowling approach, forcing the batsmen to play him. He would normally slip out his tongue at the moment of delivery.

Qadir took 236 wickets in sixty-seven Test matches. Taking 9-56 in the 1st Test of England’s 1987/88 tour of Pakistan was a career-defining moment for him.

Author Roshan Ara Masood cites an English opening batsman who was one of his victims. The England opener makes a comparison between the googly king and another contemporary great:

“Graham Gooch, who faced him that day, said Qadir was even finer than Shane Warne, to whom he passed on the candle.”

On five occasions, Qadir grabbed over ten scalps in a game. He also accounted for five or more wickets in an innings fifteen times.

During the same series against England, he made a crucial 61 batting at number nine, indicating his batting potential.

In ODI cricket, he had a respectable bowling average of 26.16.

His best bowling figures in this format were 5-44 against Sri Lanka. This was during a Cricket World Cup match held at Headingly, Leeds on June 16, 1983.

In batting, he was instrumental in guiding Pakistan to a thrilling victory versus the Windies.

He did the impossible, getting 14 runs off the last over with only Salim Jaffar left on the crease.

The potent West Indian attack was shocked by the World Cup defeat at Gadaffi Stadium, Lahore on October 16, 1987.

Qadir passed away on September 6, 2019, with many mourning his death.

Usman Qadir who has a bowling resemblance to his father is also fortunate to represent Pakistan.
Usman was born in the same city as his dad on August 10, 1993.

He made a good start to his international career, primarily in T20 cricket. Usman’s bowling average in this format is excellent, especially with his wicket ratio.

He has shown that he can definitely rip the ball, bamboozling batsmen. 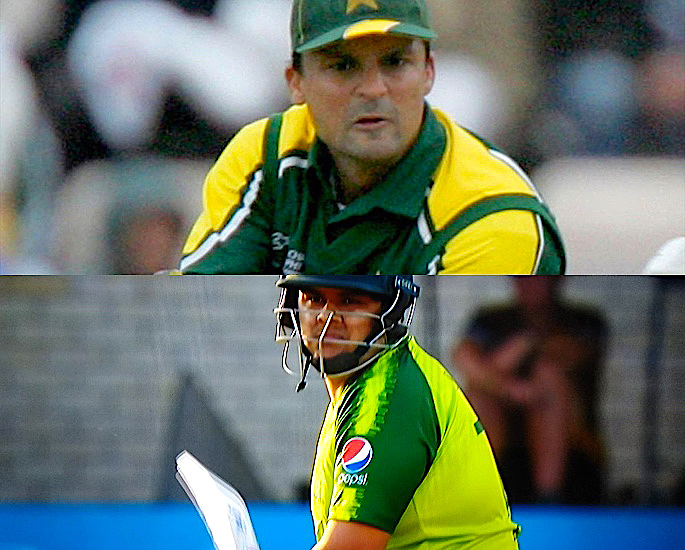 Moin Khan is a former Pakistan wicketkeeper-batsman and captain. He was born Muhammad Moin Khan on September 23, 1971.

With the gloves and as a batsman, Moin was like a fighter. His batting was always effective during crisis moments.

He was also very quick running between the wickets, converting singles into two. As a keeper, he was very motivating to spinners

Moin Khan came to the party when he hit a vital six and four against New Zealand. This was during the nail-biting 1992 Cricket World Cup semi-final.

His heroics were enough for an unbelievable Pakistan triumph at Eden Garden, Auckland on March 21, 1992.

He took 214 catches, with seventy-three stumpings in ODI cricket.

In Test cricket, he has four centuries under his belt. His highest score of 137 came versus New Zealand.

Moin made this score in the 1st Test at Hamilton during their 2003/04 away tour to New Zealand.

His Test catches/stumping finished on 128 and twenty by the end of his career.

His son Azam Khan is a middle-order batsman with a lot of firepower. He is the fifth son of a Pakistan legend to represent Pakistan at the international level.

Father Moin who was delighted with Azam’s first international in 2021 told the media:

“The second generation of our family will be stepping in for Pakistan.”

“Naturally, the pressure and responsibility is bound to increase along with the expectations on Azam Khan. To maintain it and improve he will have to work extra hard.”

Azam made his T20I debut against England at Trent Bridge, Nottingham on July 16, 2021. He hit a glorious four in his innings of 5 not out off three balls.

Having played cricket, the aforementioned fathers were excited to see their sons carry on their legacy.

No doubt, cricket running in the family will continue, with many more father and son pairs excelling in the sport for Pakistan.