Pakistan dominated squash from the early 50s to the late 90s, producing some fantastic talent. DESIblitz looks back at 7 famous squash players of Pakistan.

"wherever you hit the ball, he was there."

Many famous squash players from the past have come from Pakistan. For over four decades the country was a dominant force in the sport.

The Pakistani domination of squash began in the early 1950s and lasted till the late 1990s. Players from each decade registered famous victories across the globe.

All the players brought different skills to the game of squash.

During this period, fans got to see the rivalry of brothers Hashim Khan and Azam Khan, along with some great tussles between Jahangir Khan and Jansher Khan.

Jahangir and Jansher hold many records and are regarded as the two greatest players to have graced the sport. 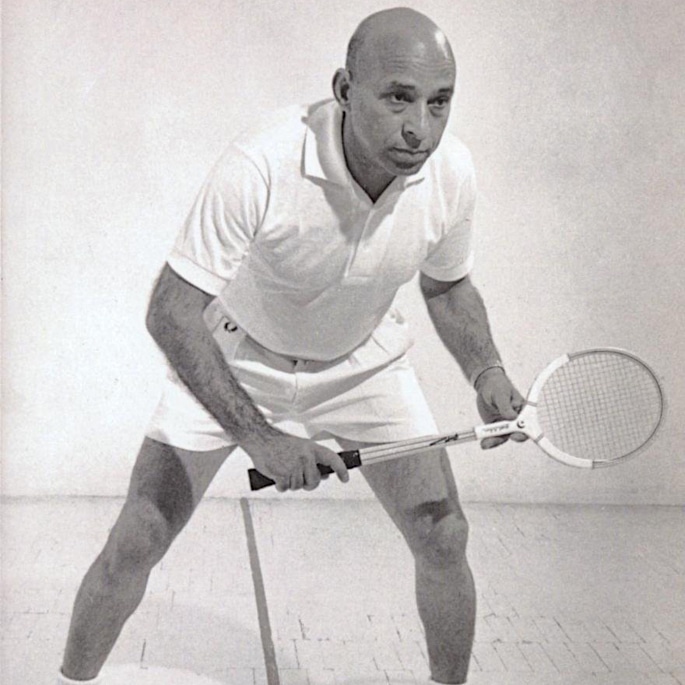 Hashim Khan was born in Peshawar during the British Raj. Khan was the pioneer of Pakistan squash. He played a pivotal role in making the country a top ranking nation in the sport.

Players from his dynasty went onto dominate the game for several decades. In 1944, the stockily built Khan demonstrated his skills by winning the All India Championship.

He became champion of this tournament a few more times until the creation of Pakistan in 1947.

Post-partition, in 1949 he won the inaugural Pakistan National Championship. During his mid-30s, Hashim made an entry to the international squash circuit in 1950.

Despite achieving in the sub-continent, it was the success he got in England that gave him legendary status.

The same year he beat Mahmoud in the Scottish Open final. Baffling the players with his talent, Hashim claimed five more British Open titles, taking his tally to six.

In 1957, his cousin Roshan Khan put a halt to his winning streak. But in 1958, Hashim reclaimed the title to become British Open champion for the seventh time.

It is believed that Hashim reached the age of a hundred. He passed away at his residence Aurora, Colorado, the USA on August 18, 2014. 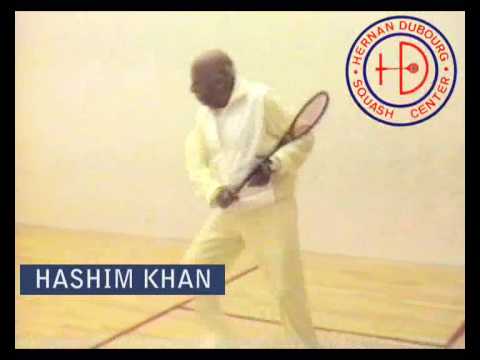 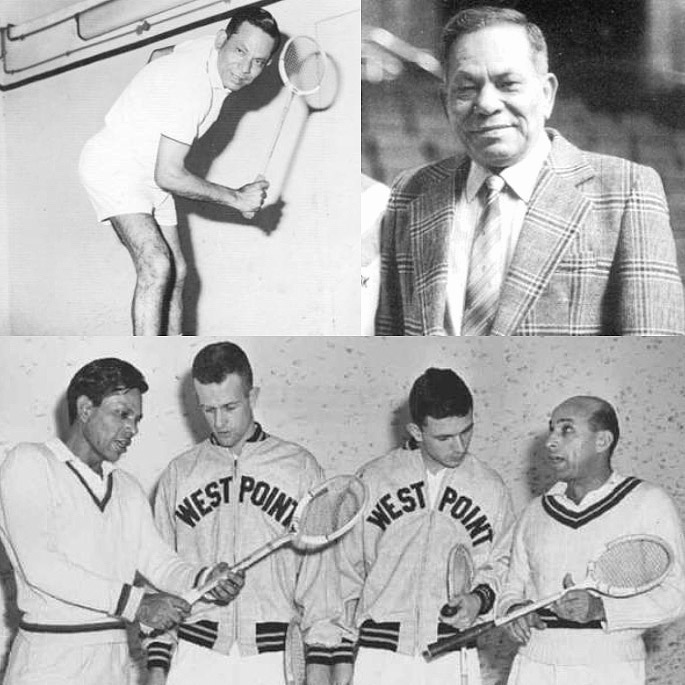 Roshan Khan was born in Peshawar, Pakistan on November 26, 1929.

He was one of the leading players of his time. He first came into the limelight by defeating Egyptian Mahmoud Karim, the reigning world champion in the 1954 Dunlop Open final.

In the same year, Roshan got to the International tournament final in Montreal, Canada where he eventually lost to cousin Hashim Khan.

During the latter part of 1957, Roshan and Hashim went on a tour down under and New Zealand.

Upon accepting an invitation they did feature in a series of matches to bolster the game and educate players from that part of the world.

Jahangir Khan, son of Roshan burst onto the scene in the 1980s and rewrote squash history. 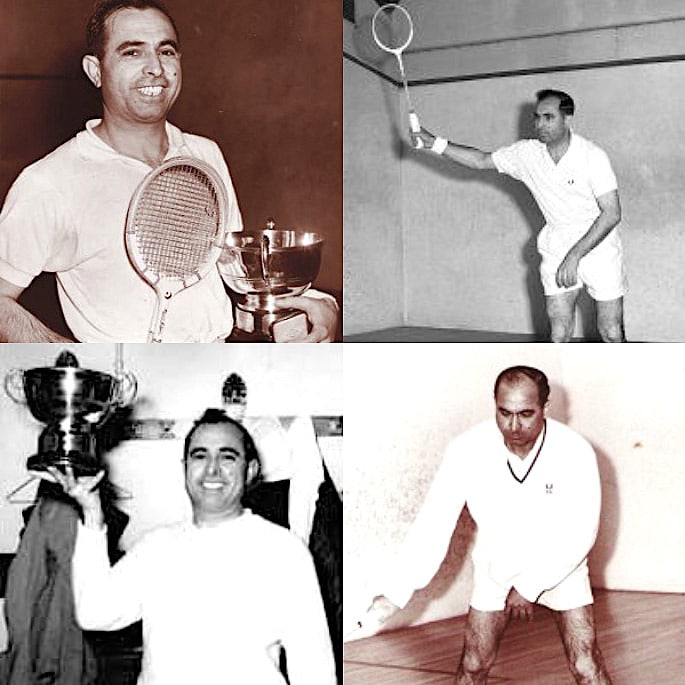 Azam Khan, the younger sibling of squash legend Hashim Khan also made a mark in the sport.

The two brothers had some great matches against each other.

It was a great accomplishment to win the British Open four times in a row and finishing runner up on three occasions.

In the book, Murder in the Squash Court (1982) former squash player and co-author Jonah Barrington refers to Azam as an ‘accountant.’ He writes:

“If Hashim was the most devastating savage of the great Khans, and Roshan the most beautiful stroke player, Azam would have been the little accountant, methodically arranging all the bits and pieces of the game, having everything under close analysis, nothing out of place.”

“He was meticulous, organised, ruthlessly clinical and very deft, he was unbelievably efficient…he constantly sucked you into situations from which it was impossible to extricate yourself …

“He was totally silent on court, like a little bird.”

“There was none of this stamping and pounding that one hears so frequently these days; he moved like a ghost, silently hither and thither. Yet wherever you hit the ball, he was there.”

Azam was a fantastic player, with even Hashim his senior by eleven years taking him very seriously on a squash court. 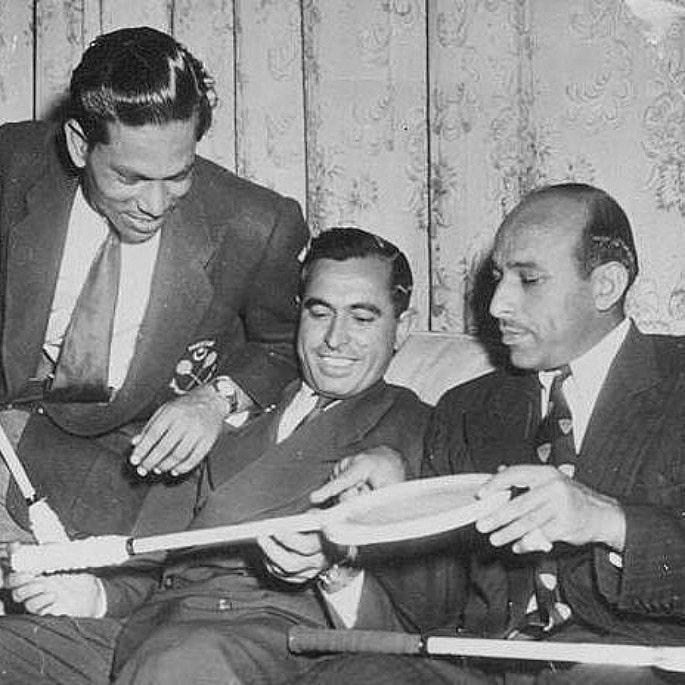 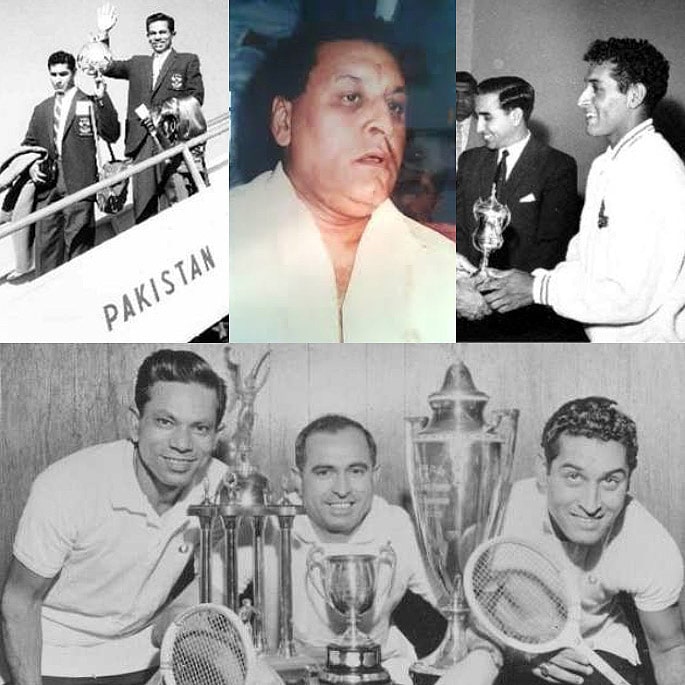 From a young age, Mohibullah Khan senior, a nephew of Hashim and Azam Khan made his presence felt on a global level.

At the tender age of 16, he reached the 1957 British Open semi-finals where he lost to eventual champion Roshan Khan.

Despite impressing everyone with his artistry and personality, he always fell short to his uncles. Thus he did find it difficult to cross the finishing line in terms of winning titles.

Mohibullah richly merited this glory for his patience and consistently hard work.

Mohibullah then suffered a loss to uncle Hashim in the 1963 US Open. Stretching the 48-year-old in a five-game match, Mohibullah could not press on to win.

Spots author Rex Bellamy described Mohibullah as “an extrovert, an actor, lived life fully; and in court thumped, banged, crashed about like an angry octopus.” 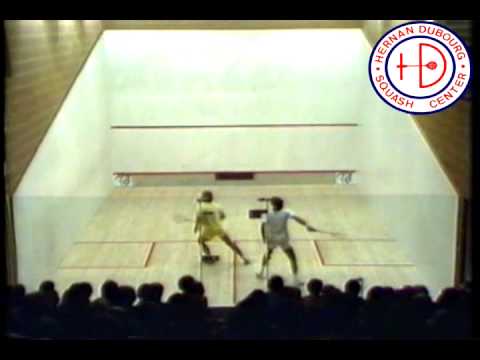 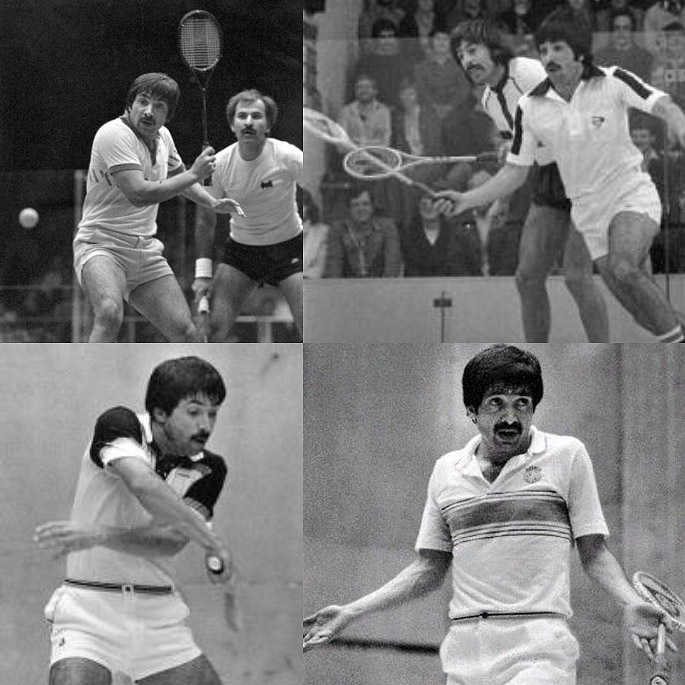 Qamar Zaman was born in Quetta, Balochistan on April 11, 1952. Zaman had the recognition of being the hardest stroke maker across the International squash scene.

He made an early impact at the age of 21, by clinching the 1973 Australian Amateur Championship.

Even though it was only his second tour overseas, he had the honour of beating world number one amateur player Cam Nancarrow from Australia.

He won three amateur events during that very same tour down under. He then went onto triumph at the 1973 and 1974 Singapore Open.

He was the first amateur player in seven years to bag the title.

With this win, Qamar became the number one player in the world, taking over the reins from Australian Geoff Hunt who he beat on his way to British Open glory.

However, his stay at the top was very short-lived, as Hunt got the better of Zaman in follow up meetings.

Consequently, the supremacy of Qamar in squash did not last for a long period.

After losing 3 times to Hunt in the World Open, he was also beaten once by Jahangir Khan in the final 1984.

Despite not being world champion ever, Zaman did accomplish a hat-trick of triumphs in the 1977 PIA World Series. 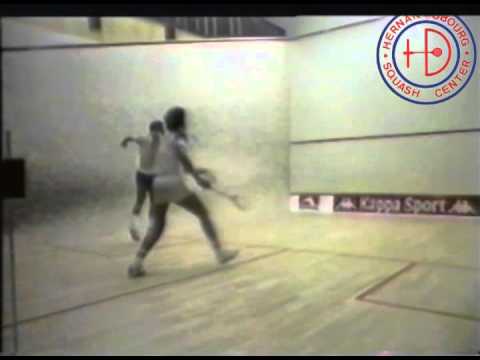 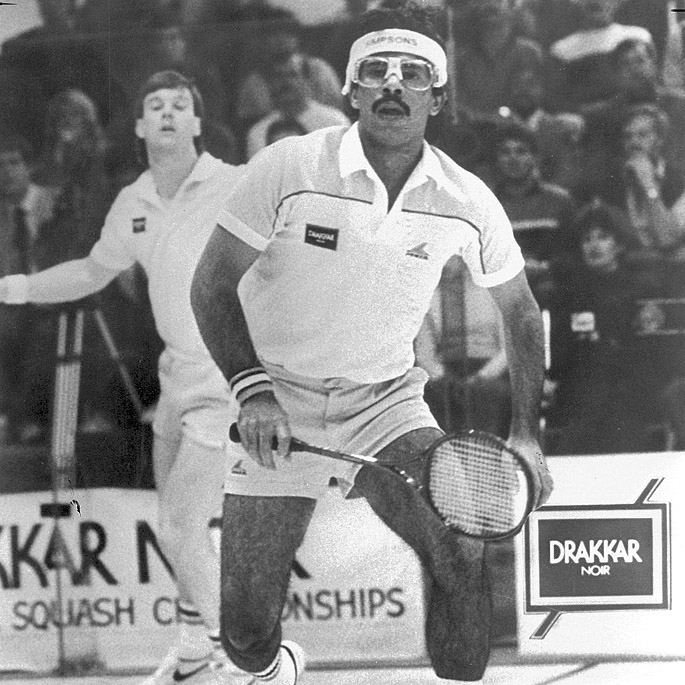 Jahangir Khan who is probably the greatest squash player in the history of the sport was born in Karachi, Pakistan on December 10, 1963.

At the age of 15, after winning the 1979 World Amateur Championship in Melbourne, there was no looking back for Jahangir.

He became the youngest man when he beat Phil Kenyon from England to become the champion.

After winning the 1980 New Zealand Open, he pocketed the 1981 British Under-20 Open Championship.

The same year he beat the supreme Geoff Hunt in the final of an international event that took place in Munich, Germany.

A truly outstanding player, Jahangir went onto to control the sport. His five-year unbeaten record is simply phenomenal.

But it is his British Open record which probably will never be beaten.

From 1982 to 1991, he became British Open champion ten times in succession.

In the last few years of his illustrious career, he was overpowered by Jansher. Nevertheless, he is and always will be one of the finest sports athletes to have come from Pakistan. 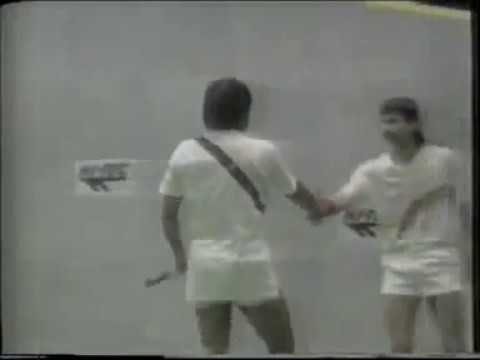 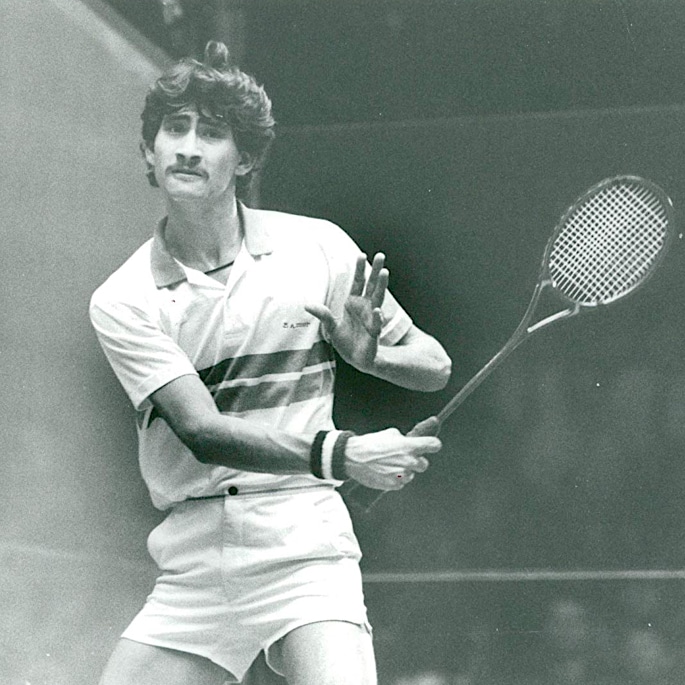 During a terrific international career, he rarely lost a game – that too when the sport became more competitive.

Jansher first came to notice after defeating Australian Rodney Eyles to win the final of the 1986 World Junior Championships in Brisbane.

In the same year, he won the Singapore Open, beating Qamar Zaman in the final.

His early success did act as a warning to undisputed King of Squash, Jahangir Khan.

The rule of Jansher began in 1987 while he was still a youngster. That year he won several tournaments, including the World Open, PIA Masters, Swiss Masters, Hong Kong Open and the Al Fajaj Grand Prix.

He had the distinction of beating Jahangir Khan eight-times consecutively.

With so many achievements, the extraordinary Jansher did achieve his ambition of becoming one of the greatest squash players to have picked the racquet.

He is and will remain bracketed amongst the greatest ever squash players. Jonah Barrington commented on his exemplary on-court conduct saying:

“He is the role model for any sportsman, he is a complete Squash Player.” 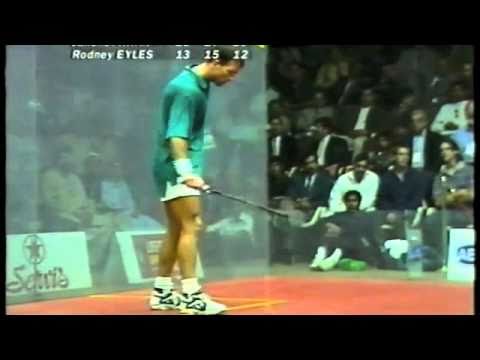 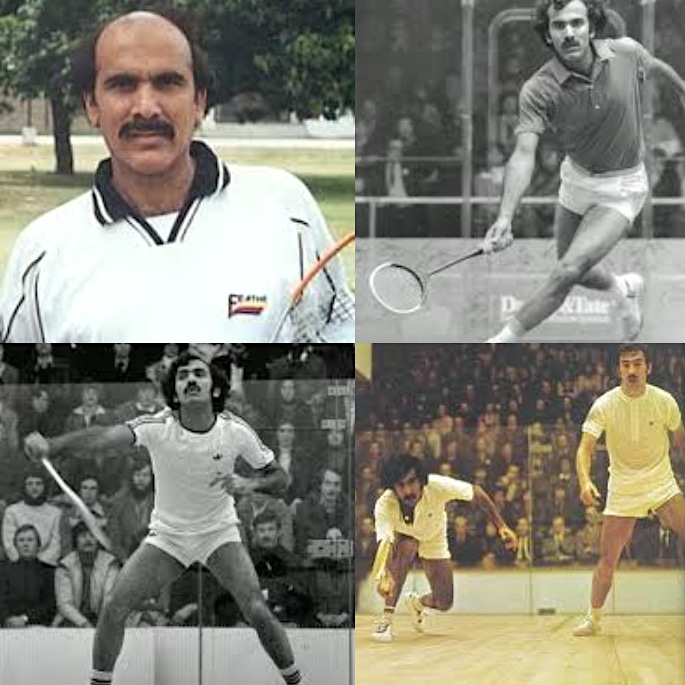 Besides the above, a notable omission is Gogi Alauddin. Many describe Alauddin as an artist on the squash court.

Gogi also won the 1975 Irish Open and Malaysian Open, along with defeating the mighty Geoff Hunt to win an International tournament in Perth, Australia.

Post-retirement Alauddin became a coach and flourished in that too.

Despite the decline of Pakistan squash at the start of the new millennium, there remains optimism that the country can reignite the glory days once again.