Three Pakistani women were arrested for allegedly selling ‘ice drugs’ to students at parties in Karachi. They were part of a gang of six.

They allegedly operated by selling the drugs to students

Three Pakistani women from Karachi were arrested on Thursday, February 28, 2019, for allegedly selling ‘ice drugs’ to students in the city.

They have been identified as Muskan, Laiba and Humera. The three suspects were part of a gang of six. Rohail Shakeel, Waqas Vikki and Abdul Raheem were also arrested.

They were taken into custody after police conducted two raids in the city.

The gang were allegedly involved in selling ‘ice’, also known as methamphetamine and commonly referred to as crystal meth.

They allegedly operated by selling the drugs to students at their educational institutions and while they were at private parties.

Ecstasy pills were also allegedly sold by the gang to young people.

The selling of drugs to students in Pakistan has become more prominent and police have been conducting raids to combat the problem. 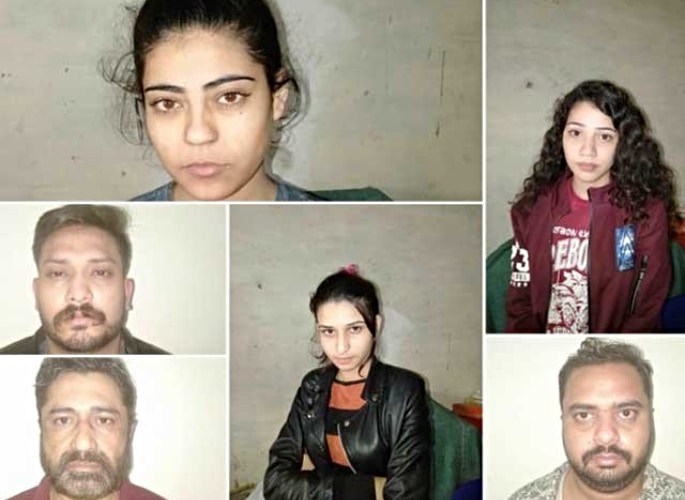 According to SHO Sharea Faisal, the six suspects were arrested after two raids were conducted by police on Drigh Road and Dalmia Road.

A number of pills were also recovered from the suspects’ possession.

The six gang members were taken into custody and an FIR was registered against them.

In another incident, four people were arrested in Khyber-Pakhtunkhwa for selling drugs to students. Officers seized heroin, marijuana and opium from the suspects.

Crystal meth was also recovered from the scene.

Illicit activities among young people during parties has become a common thing in Pakistan.

In Islamabad, 22 girls and 25 boys were arrested at a farmhouse for hosting a party with alcohol present.

The arrest took place on the morning of April 28, 2018, where the young people were said to be involved in obscene and suspicious activities.

Police conducted a raid on the farmhouse and seized bottles of alcohol.

Many of the girls suffered minor injuries and claimed that they were being manhandled by police. However, officers stated that the injuries were sustained while they resisted arrest.

The initial report stated the occupants found at the premises were involved in activities of a vulgar and suspicious nature.

While alcohol is prohibited in Pakistan for Muslims, non-Muslims can get alcohol with a special permit. It is a criminal offence if you are Muslim and get caught.

Alcohol is commonly bought and consumed illegally for parties. Despite the prohibition, people drink it at parties.

Dhiren is a journalism graduate with a passion for gaming, watching films and sports. He also enjoys cooking from time to time. His motto is to “Live life one day at a time.”
Hayes Man to Pay £53,000 Taxes for Smuggled Alcohol
Crawley Man ‘made £1m’ from Airport Car Parking Scam