Doner Kebabs – What’s Really in Them?

The Doner Kebab is a popular take-out food in the UK. But not a lot of people are fully sure of what the meat is made from. We explore some findings.

After a partying night out, the one thing that most people enjoy in the UK is a Doner Kebab from the nearest late-night takeaway.

The Doner Kebab is also called a donair, döner or donner kebab. Many believe that this brown coloured,  spit-roasted, thinly sliced meat, is primarily made from processed lamb meat with some seasoning.

However, the meat used for making doner kebab meat may be lamb, beef, veal or chicken but not pork. It is sometimes very difficult to taste what the kebab meat is actually made from due to the flavouring.

Interestingly, its been discovered by the UK Trading Standards authority that the ingredients of these kebabs are not always as assumed by consumers of this popular fast-food.

Hence, people who enjoy a doner kebab may not really know what is in the doner meat or how is doner meat made.

When it is served in pitta bread with salad, with chips or on its own and smothered in a tasty sauce such as chilli, mint yoghurt or garlic mayonnaise; it makes it even harder to determine the true taste. 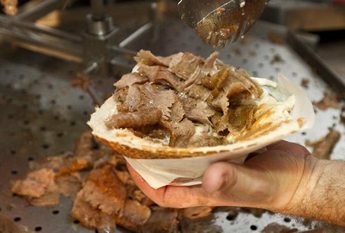 Mostly in the UK, this kebab is enjoyed after a night out drinking especially at the weekend, when large portions are eaten. Many non-drinkers too love it as a Friday night treat or frequently as a main meal.

Over 20,000 kebab outlets are now in business in the UK, compared to about 10,500 fish and chips shops and around 12,000 curry restaurants. It’s estimated that about 1.3m kebabs are sold across Britain daily. Showing the tremendous growth of this favourite take-out.

Eaters of halal meat eat these kebabs from outlets serving specifically halal doner kebabs.  So, this take-out food is hugely in demand in its various forms.

But do they know what’s in a Doner Kebab?

A Trading Standards investigation found that doner kebabs served by the fast-food shops do not always contain the meat as stated on the label from suppliers.

After investigating the kebab meat, they found that in 15% of the cases the meat was not all lamb as stated on the label but contained beef and in 6 cases pork was also found in the meat.

Following another investigation, in London, the Home Counties and the West Midlands, out of ten doner kebab samples, only three were 100% lamb. The rest were bulked up with beef, chicken and other ingredients.

“I would expect a doner kebab to be made from lamb or mutton and most consumers would expect that. If there is different meat in a doner kebab and people are not told, then that is misleading consumers. There are always opportunities for people to cut corners and choose cheaper supplies.”

In the case of the beef found in the meat, this would not please South Asian meat eaters who do not eat beef on religious or cultural grounds, and the finding of pork would certainly violate rules followed by Muslims who do not eat pork in any form. Therefore, these findings will most likely be a shock to Brit-Asian people who eat these kebabs.

Which? magazine conducted a survey in Birmingham and London and published the results in 2014, finding 60 lamb takeaway which included lamb kebab outlets. 24 from the sample had meat of species other than lamb in them. The main problem was with kebabs, where 20 of the kebab samples contained beef and/or chicken present with as much as 60% in the overall product in some.

Whilst the Trading Standards is taking all finding like these seriously and prosecuting outlets for misleading consumers, the main problem lies with the manufacturers. They need to label kebab meat correctly in terms of its real contents with percentages.

This implies Trading Standards will have to work with the manufacturers to develop and improve the guidelines to address this problem.

In addition, the investigation has found that these kebabs also have an extremely high salt content. In one case, a particular kebab was found to contain 14.7 grammes of salt, more than twice the guideline daily amount of 6g.

Also, the fat content in doner meat is very high. 117.2 gm of fat was found in one kebab, which is well over the guideline daily amount of 95g for men and 70g for women.

According to research by scientists in 2008, they found that a doner kebab contained cooking oil which equalled a full wine glass.

The fat found in kebabs they tested contained between 111g and 140g.

“The majority of that fat is saturated, so it’s going to raise your cholesterol and give you thickening of your arteries.

“If you were eating that meal twice a week on top of your ordinary diet, it’s a ticking time bomb of coronary heart disease.”

A Food Hygiene report produced by Glasgow Council, further to reviewing a doner kebab outlet in Glasgow, found that during the inspection it was observed that certain pre-packed doner kebabs were being delivered without sufficient labelling information. There was no information as to whether the meat was chicken, lamb or other.

Questions are also raised about what aspects of the animal the doner kebab meat is made from, and how it is served daily.

Much speculation surrounds doner kebab meat ingredients. Including it being made from surplus lamb off-cuts, offal, feet, ears, tongues and other unusual parts not found at a high street butcher shop or supermarket.

When the manufacturers make the kebab meat, it is heavily spiced, processed and re-formed into a cylinder shape. Therefore, making it literally impossible to determine what parts of the animal the donner meat comes from or even which animals the kebab meat is made from, unless significant tests are done of the meat in labs.

Doner kebab meat is known to contain breadcrumbs as well. Therefore, the availability of doner kebab meat gluten free is going to be an issue for those with such dietary requirements.

With regards to serving of doner kebabs, the slices of kebab meat are carved from the rotating cylinder of meat which is heated by a circular spit behind the meat. This means that the same meat is heated and reheated daily, until the cylinder of meat finishes. Which implies that this may not make the meat as fresh or potentially healthy to consume due to its reheating or method of storage. 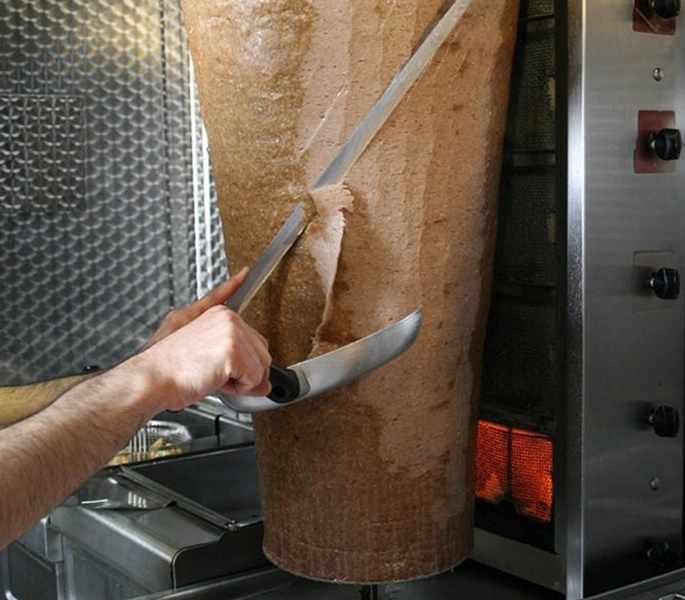 Councils like West Lothian produced a fact sheet to help doner kebab outlets ensure the meat served by them abide by health and safety rules for consumers.

Finding a healthy kebab alternative will most likely mean eating making it yourself or eating other types of kebabs such as a real chicken kebab or lamb kebab.

Whether these kind of findings will put off people from eating doner kebabs is another thing because it will always be an enjoyable major part of a night out.

Therefore, as a caution, it is always important to consume kebabs from outlets that have a good standard of hygiene and for those people who do eat halal, that it has the symbol displayed clearly. If in doubt, it is always better to ask.

However, it is becoming evident that no one fully knows what is really in donor kebabs despite claims from manufacturers, and whether the labelling for such food will ever improve for the consumer.

Nazhat is an ambitious 'Desi' woman with interests in news and lifestyle. As a writer with a determined journalistic flair, she firmly believes in the motto "an investment in knowledge pays the best interest," by Benjamin Franklin.
Video Recipes – Dosa
Vegetarian Shepherds Pie Recipe