Bollywood star Salman Khan is taking fellow actor Kamaal R Khan to court for his review of the film ‘Radhe: Your Most Wanted Bhai’.

"he is getting too much affected by my review."

Salman Khan is taking actor Kaamal R Khan (KRK) to court for defamation over his review of Radhe.

Salman Khan played the lead role in Radhe: Your Most Wanted Bhai, which released on May 13, 2021.

Now, he has filed a defamation complaint against KRK for his poor review of the film.

Salman Khan’s legal team sent KRK a legal notice in regards to the complaint on Tuesday, May 25, 2021.

Radhe received mixed reviews from both critics and audiences following its release.

However, self-proclaimed critic KRK has found himself in hot water for his review.

“I am giving review for my followers and doing my job.

“You should make better films instead of stopping me from reviewing your films.

“Main Sacchi Ke Liya Ladta Rahunga (I will keep fighting for the truth)!

“Thank you for the case.”

Kamaal R Khan followed up his tweet with a series of tweets relating to Salman Khan and his film Radhe.

The actor made a joke about the title of the case being ‘Khan vs Khan’, saying:

“Waise Court main Case Ka title Aacha Rahega (By the way, the title of the case in the court will be good)! #KhanVsKhan!”

KRK also tweeted to say that he would not review any more of Salman Khan’s films.

“I said so many times that I never review film of any producer, actor if he asks me to not review.

“Salman Khan filed defamation case on me for review of Radhe means he is getting too much affected by my review.

He also suggested a compromise with Salman Khan, reiterating that if Khan retracts the defamation case, he will delete his Radhe review.

KRK even attempted to enlist the help of screenwriter Salim Khan.

“Respected @luvsalimkhan Sahab, I am not here to destroy @BeingSalmanKhan films or his career. I review films just for fun.

“If I know that Salman get affected by my review so I won’t review.

“If he could have asked me to not review his film so I would not have reviewed.”

“Therefore there is no need to file a case to stop me from reviewing his film.

“Salim sir, I am not here to hurt anyone. So I won’t review his film in the future.

“Pls ask him not to proceed the case. I will delete my review videos also, if you want.”

Since his plea for Salman Khan to drop the case, KRK has also tweeted asking the media not to try contacting him. 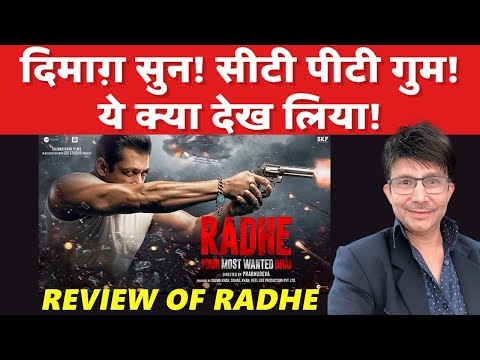