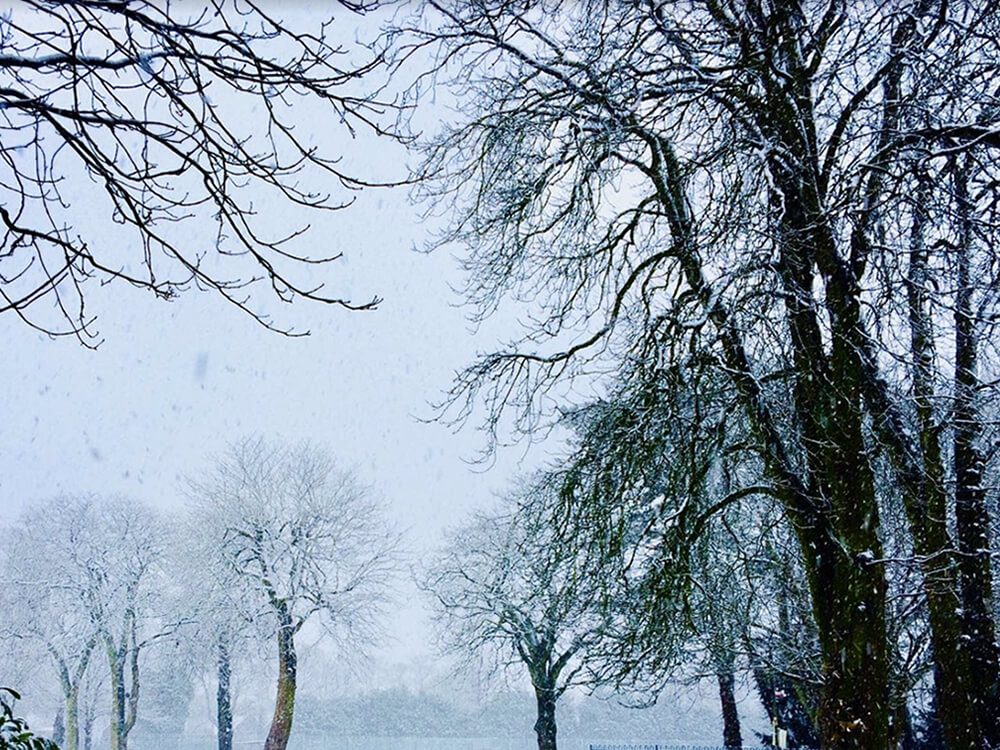 Penning snow with paint was not nearly as impossible a task as with a pencil. Liyane sighed, glancing up from her stub and pushing it aside. Past the glass, snow hung perfectly untouched, excluding the morning glow which brought the white to life with flecks of yellow and blue, like layers beneath a portrait’s highlights. There, the occasional green spike protruded, resolute in escaping a white embrace. To her right and to the right of the bay window facilitating the entrance of flooding light, a small fire stood unattended. Previously occupied by opposing infantile feet that fidgeted from one spot to the next, it rose in a troublesome way: if one went too close, ‘it’d burn’, too far and ‘it also burned’ – something synonymous with frostbite in Ali’s vocabulary.

He loitered now by his father’s side, pacing; exercise was the best medicine for cold, upsetting the legs of the table which shook and displaced warm tea, a cluster of nearby letters also. Almost routinely, Abba reached out, placing a steady hand on Ali’s incoming shoulder, this was the moment Ali would stop, peering in curiosity at the first of the reading pile. Then leaning against Abba’s chest, he sat, mouthing huroof he recognised.

Liyane scrutinised her drawing. It was no good. No amount of work would beautify it, its foundations were even unpleasant to look at. She tossed it to a pile beside her mother. It landed with a sigh. Her mother, busy hemming Liyane’s abaya, smiled as it came her way, though too quickly for Liyane’s liking.

“…And crackle and burn!” said Liyane merrily, earning a frown from Ammi. She continued, “You can’t fly it up the chimney Ali, it’ll only fall,”

“Exactly, like the big bad wolf. Down, down, oops and a bang!”

He laughed, then grabbing a sheet, tugged at her arm and said, “Come on!”

“No, no, it’s a whole lot of musty, what are you thinking of, by burning planes?” she said gravely.

Ammi tutted beside her, she had sewn herself to the dress.

Ali hastily folded her drawing, older siblings and their false sense of maturity were terribly annoying at times; it looked more like a toad than an aeroplane. Pinching it from him, Liyane gave it wings. Now observing, his eyes and cheeks brimmed with curiosity, envy also: her fingers confidently folded edge to edge, forming diagonal lines, pointed tips, flat wings; she hid her hesitation in these movements, remaining exactly so as Ali pushed his head closer, gazing with wide eyes at the metamorphosis before him. Upon completion, his sister turned the plane threateningly towards Ali’s nose.

Ali threw it through the air. Unfortunate in its direction, it landed with a plop, somewhere near Ammi’s tea.

“Ali, beta!” exclaimed his mother, shooing his plump hand from the cup, this had no effect for he only edged closer and peering over his mother’s arm, said:

“Bas, bas, it is okay. Here, I’ll get another,” said Abba, rising quietly from his chair. He moved in Ammi’s direction. A teacup was plucked from its resting position and balanced in the air. Looking over his spectacles, Abba paused before passing an opened letter to Ammi, the third from the pile. His free hand squeezed her own a little too tightly, then heading for the kitchen, Abba left, Ali propped on his back for good measure. The lamp to the right of Ammi flickered, she remembered the bulb needed changing, it had lost its warmth several months ago.