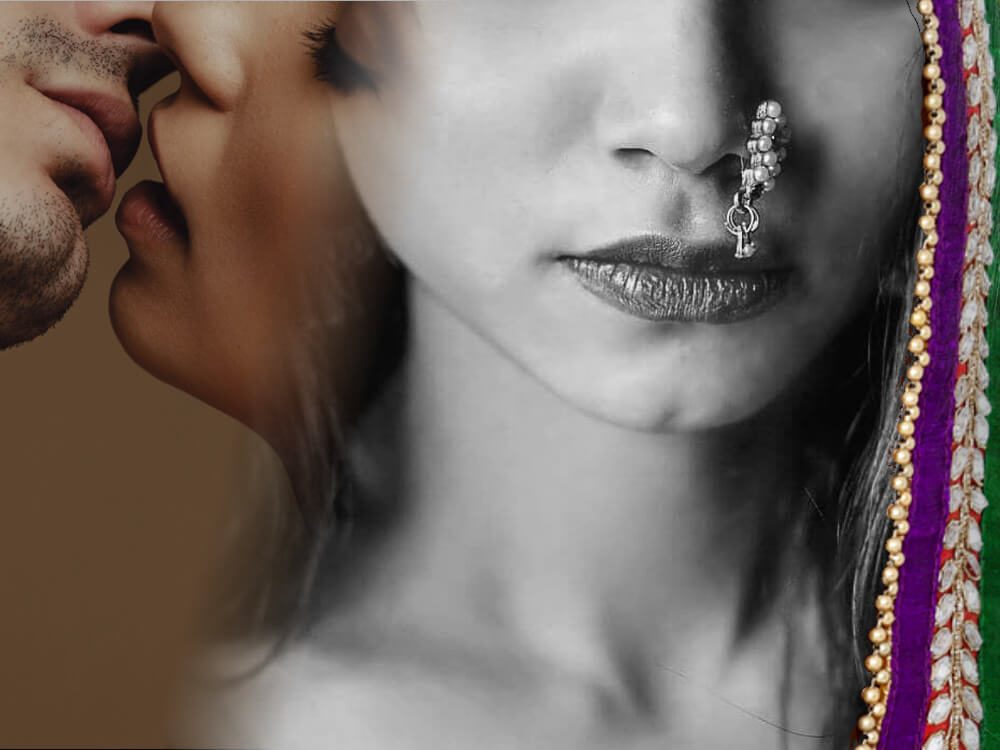 Reena locks the door behind him, her hand quivering. Amar will not return till the morning. She holds her hand between her breasts to check that the racing heartbeat really belongs to her. The cold of the door sends a soothing calm down her spine.

Her phone vibrates ‘New Message’ and she struggles to contain her smiling. Racing up the stairs to the bedroom she bites off the labels off her thongs and lace stockings arranging them onto her silk sheets.

Dancing she takes out of hiding her satin blindfold, her paddle, and her handcuffs. Into the drawer, she slides away her bejewelled nath and the shy doting wife.

Her mouth waters with the knowledge that soon she will saddle her stallion. Within her four walls, at least four taboos will be broken into.

Pulsating through her veins her urges are imprisoned as she inhales, holds her breath, and exhales. Reena lights the sandalwood and orange candles along the hallway through to the bedroom.

Her naked body shimmers in the candlelight as she spreads apart petals of rose and jasmine upon her floor.

Aroused and biting her lip she carefully pulls her stockings up her silken legs. She releases a whimper as her painted nails tease into place the lace around her thighs. Waiting for her love to arrive, Reena crosses her legs tightly.

At last the door knocks. Almost falling over her own feet she answers the door.

Aware that she is only wearing her stockings and thongs she remains behind the door. Andrew peers around and is every bit as handsome as when they first met.

Before his briefcase reaches the floor, Reena has her legs firmly wrapped around his waist.

Kissing her neck he says “Damn it, Ree, you look amazing.”

“You’re still perfect and so sooo wet.” Andrew just about drops his blazer to the floor. “Let me take you upstairs.”

Their lips are inseparable, their bodies intertwined. “Spank me right now!” She plunges a round wooden paddle into his hands.

“Harder I said! Yes. Again” Reena groans in delight at every heated surge.

As her habit prevails, Reena reaches to turn the light off.

Amidst her groans, Reena blushes. Only Andrew says she is beautiful.

Reena has left her handcuff dangling from her bedpost, open and ready.

Andrew firmly locks one wrist above her head and kisses the other where the Meromelia ends. He looks at her with that penetrative stare of his. Reena clenches him tighter. He slides the blindfold over.

Andrew knows his role well, rehearsed in orgasmic style since their college days. Tonight is the night she wants something new.

As they collapse onto each other in silent contentment, Reena dwells on how surreal but fulfilling this secret life of hers is. She turns to Andrew and as always he is already looking at her. Reena smiles a truthful smile.

“This is actually delicious; your cooking has improved Andy.”

Andrew quickly replies “I’d cook for you every day if you would let me.” Reena could tell he was deadly serious. The morsel of food on her fork about to enter her mouth is returned back to the plate.

“What do you mean?” Reena asks inquisitively.

“I can tell that you’re not happy.” Andrew knows Reena better than she cares to admit to herself.

Reena looks at Andrew longingly and disappears into a daydream.

Reena at age seventeen had an arranged marriage with Amar after her family discovered she was dating Andrew at college. Her family arranged her marriage as far away as they possibly could. From her home town of Manchester to the smaller much quieter town of Norwich, conveniently 210 miles away.

Constantly reminded she was ‘very lucky’ that her family were ‘kind enough not to leave her abroad.’

Reena hated with her entire being all those reminders. The reminder from her parents “You are lucky that Amar married you with your useless one arm.” The reminder from her in-laws that she should be grateful he stayed married to her. The reminder he stayed even though her mother-in-law proved with unbloodied sheets she wasn’t a virgin after her wedding night. The reminders from her stepdaughter, only two years younger than Reena in age, but cruel and belittling with every spiteful word.

Reena hated most of all the way Amar would flinch when he looked at her arm, how he would ask her to cover herself up with a shawl as soon as the door knocked. The way Amar would never allow her to undress in his presence, even for sex she had to be under the sheets with the lights off when he demanded.

Reena and Andrew had been having their date night every month for the last seven months since she met him again by chance, almost fourteen years after she was taken away from him.

She had lost the will to fight her constant barrage of torments. Almost as though fate itself had intervened, Andrew noticed Reena crossing Fye Bridge while boating on river Yare.

With Andrew now working and living in central London, he was only two hrs drive away from Reena. Andrew was the masala that brought flavour and warmth to her life.

Andrew walks around the dining table, shirtless with his bare toned torso to Reena and kisses her passionately.

“Were you fantasising about what you asked me to try next?”

Reena forgets her troubles as Andrew lifts her from her chair up onto the dining table, parting her thighs around him. She unzips Andrew only to hear a key being turned in the front door.