The Servis 3rd HUM Awards took place on April 9, 2015 in Dubai. A glamorous evening with the biggest Pakistani celebs and entertainers from TV, music and fashion. Who won what? Find out here.

Sadqay Tumhare was one of the big winners of the night.

This is the first time that the Hum Awards has taken place outside of Pakistan. 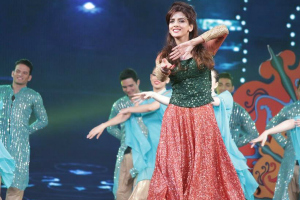 Performances kept the glamourous audience entertained throughout the night. Sejal Ali, Feroz Khan, Saba Qamar and Ahsan Khan all took to the stage to rock to some filmy favourites.

Another first for a Pakistani Award ceremony was a special live performance from Indian singing legend Sunidhi Chauhan.

Alongside all of the entertainment were the big winners. Abida Parveen was awarded ‘Excellence in Music’, while the ‘Lifetime Achievement Award’ was given to Anwar Maqsood. 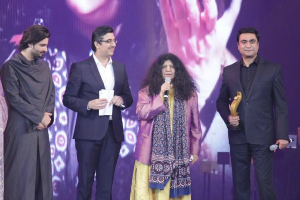 The HUM Awards is a clear indication of how much Pakistani drama serials have grown in popularity not only in Pakistan but around the world.

Face of Hum Awards, Atiqa Odho admitted that Pakistani dramas had so much success because of their relevant and relatable content and subject matter:

“We are extremely brave when it comes to our content. We don’t show you just glamour. We will put up a mirror and show you reality. Our Pakistani dramas have stayed honest to our culture and are close to reality.”

“Lots of people, even if they don’t live in Pakistan, feel a cultural connect. They feel that it could be a story of their homes … After all, our family values are the same.”

Actor Ahsan Khan who lost out to Meekal Zulfiqar for ‘Best Actor’ added: “We believe in realistic acting and characters. Earlier there was not so much exposure for our serials, but with Hum Awards being held overseas it shows our growing popularity. It’s such a good sign.”

Here is the full list of winners of the Servis 3rd Hum Awards 2015:

Once again the Hum Awards proved to be glitzy affair in the heart of Dubai. Congratulations to all of the winners!

Indian Summers ~ The Trial of Ramu Sood
How Hot is Sunny Leone in Ek Paheli Leela?