"Nudity and sex has been associated with irreligiousness and guilt."

Whilst studying in Bengaluru at the Srishti Institute of Art, Design and Technology, she had to submit a project based on any historical event.

Her illustrations are displayed as a type of paper craft using mechanisms that you would see in a typical pop-up book.

This clever way of exploring censorship has been taking the internet by storm and explores moral policing in India.

Her Tumblr account hosts this series and explains what she sets out to do in her artwork:

“‘Being Censitive’ tries to explore what is considered to be obscene and what is acceptable, highlighting the struggle between people and censorship/moral policing.

“Temples are seen as an extremely pious place, and nudity and sex has been associated with irreligiousness and guilt.

She explores all different kinds of censorship. Like Section 377 of the I.ndian Penal code, which condemns homosexuality as a criminal offense. 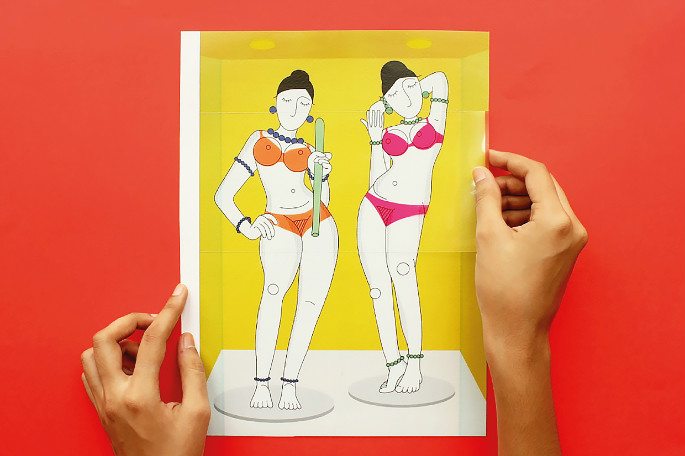 One of them also comments on the 2013 Brihanmumbai Municipal Corporation proposal, which actively allows civic officers to enforce a removal of lingerie models in shop displays.

This is an attempt to stray men away from having impure thoughts that would lead them to attack women and commit crimes against them.

Chandra adds: “Even celebrated artists like Raja Ravi Varma had to fight against being condemned for obscenity because of the nature of his paintings.

“He was criticised for his work like Seduction of Vishwamitra and Fresh from bath which showcased nudity.

This level of control is still rife in India today. Chandra hopes to continue battling against it and pushing the boundaries with her art work.

Her next project, Grimm Reality, will work on exploring traditional fairytales and how they reinforce restrictive moral ideas on young girls.